Sheikh Hamdan Shows Off His Sporting Prowess (And New Specs) 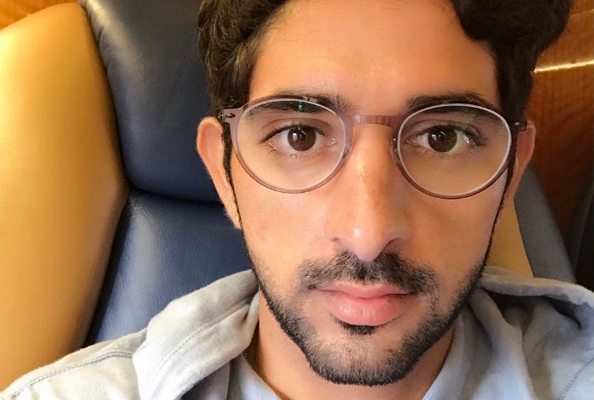 Well, they’re not really his… but they should be.

The Crown Prince of Dubai, who is also Chairman of the Executive Council, shared an image of himself spear-fishing in the depths of the Arabian Gulf on Thursday.

The royal is no stranger to adrenaline-racing activities, whether it’s endurance races, equestrian games or scuba diving – he’s even scaled the top of the Burj Khalifa.

But it was the blue waters of the emirate’s seas that Sheikh Hamdan explored over the weekend.

Read:
Princess Haya Makes Heartfelt Plea For South Sudan: ‘We All Need To Act Now’
Sheikh Hamdan Paid A Visit To The Brand New Apple Store In The Dubai Mall

Sharing an image of himself clad in a wetsuit, flippers and snorkel, the royal captioned the action shot: “Breath… better make it count!”

And judging by this snap of his catch, he had a pretty successful day of it:

However, despite the 129,000 likes HH’s diving photo attracted, our eyes were on his latest upload…

Read:
Sheikh Hamdan: Working Mums Are ‘The Nucleus Of A Happy, Healthy Society’
These UAE Royals Moved A Building Site To Save A Bird And Its Eggs

Sheikh Hamdan later shared a selfie in which he donned a pair of glasses – a new look for the Crown Prince that we’re really feeling.

Alas, the royal doesn’t actually need help to see, but he was just trying on his friend’s specs for size.

A different perspective through my friend’s 👓 #goodmorning

But should he ever stray from 20/20 sight, he’s sure to suit a pair of round rims.

The royal, who boasts more than 5 million Instagram followers, regularly posts snapshots of his life, with many showing a unique side to life in Dubai.

So, we’ll leave you with some of our most recent favourites (and yes, they’re mostly animal-based)…