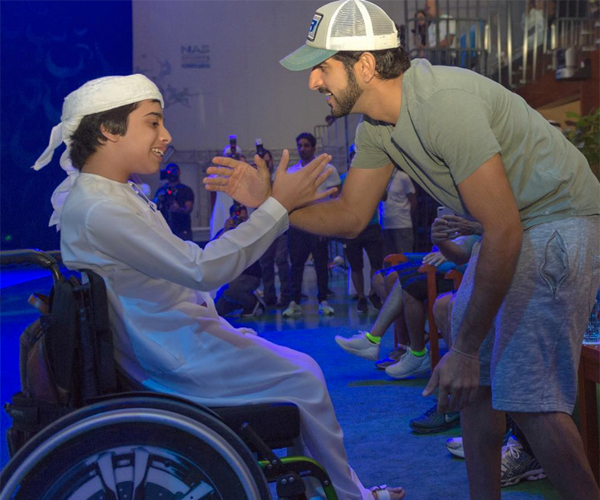 HH Sheikh Hamdan bin Mohammed bin Rashid Al Maktoum is the one of the world’s most athletic royals, so it’s no surprise that the Crown Prince of Dubai has lent his support to a special Ramadan sports tournament.

The Nad Al Sheba (NAS) Sports Tournament is held every year during the Holy Month, as a way to help fasting athletes stay at the top of their game. The event attracts both able-bodied and disabled competitors from all over the world, in sports such as volleyball, fencing, and wheelchair basketball.

Sheikh Hamdan – who is the chairman of the Dubai Sports Council – attended the opening of this year’s tournament, which is being held under the theme of “Limitless Abilities”.

The royal shared a touching photo to his Instagram account, which shows him sharing a handshake with a fan at the event.

“With the champ,” he captioned the sweet snap.

The young athlete, who starred in the tournament’s opening ceremony, described it as “one of the happiest moment of my life”, and thanked the royal for his support.

Earlier this year, HH Sheikh Mohammed bin Rashid Al Maktoum, vice president of the UAE and ruler of Dubai, said he would like people with disabilities to be referred to as “people of determination”.

“Disability is in fact the inability to make progress and achievements,” the royal said.

“The achievements that people of determination have made in various spheres over the past years are proof that determination and strong will can do the impossible and encourage people to counter challenges and difficult circumstances while firmly achieving their goals.”

Dubai has committed to becoming one of the most disabled-friendly cities in the world by 2020.