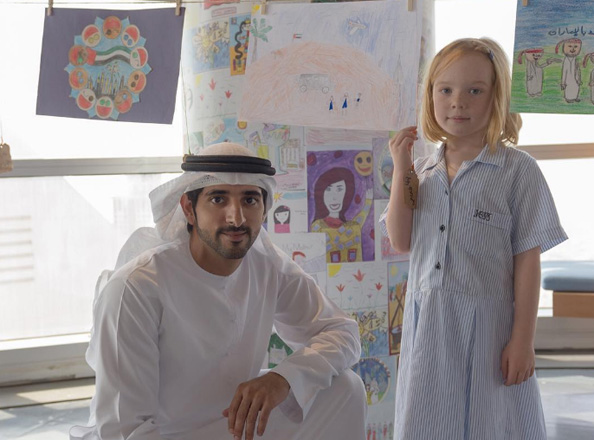 There’s no doubt that His Highness Sheikh Hamdan bin Mohammed Al Maktoum, Crown Prince of Dubai is a man of the people.

He’s known for his love of animals, photography, and adrenaline-fuelled sports. And now a recent post the young Sheikh’s Instagram account today proves he is one of the kindest and most accessible royals in the region, as he poses next to cute seven-year-old schoolgirl Eva Hardie from the UK, who has lived in the UAE her whole life.

The caption on the photo reads: “I enjoyed meeting 7-year-old Eva Hardie from the UK today, she has lived in Dubai her whole life.

“Eva shared her thoughts about happiness and positivity in the UAE. She drew a picture about how the desert makes her happy, and we talking about our shared passion for nature.”

Beneath the post, Sheikh Hamdan added the hashtag #happyuae.

Naturally, the picture was received well by Sheikh Hamdan’s fans, who commented on how sweet the Sheikh’s and Eva’s little meeting was.

It’s been a few months now since the UAE’s Programme of Happiness was launched, and the Minister of Happiness, Ohood Al Roumi was selected.

Speaking about the overall goal of the Programme of Happiness at its unveiling, HH Sheikh Mohammed bin Rashid Al Maktoum, Vice President and Prime Minister of the UAE and Ruler of Dubai stated that: “Our goal is that happiness is a way of life in UAE society.”

Perhaps Sheikh Hamdan has figured out that the secret to happiness lies in the UAE’s children, and we can expect to see many more of these little meetings to come.