They may have finally been granted the rights to vote, but Saudi women have received a new blow after Starbucks decided to ban them from one of its shops.

Next time you head to your local coffee shop to order your pick-me-up Americano spare a thought for the women of Saudi Arabia who don’t have the same privilege. According to Arab News, women have been denied entry to a Starbucks branch in Riyadh after religious police complained there was not a wall to divide genders.

Related Story: Women In Saudi Given The Right To Vote

While Starbucks claim the ban is only temporary – a segregation wall is being renovated in accordance with local customs – a sign reading: “PLEASE NO ENTRY FOR LADIES ONLY SEND YOUR DRIVER TO ORDER. THANK YOU,” was taped to the door of the branch. 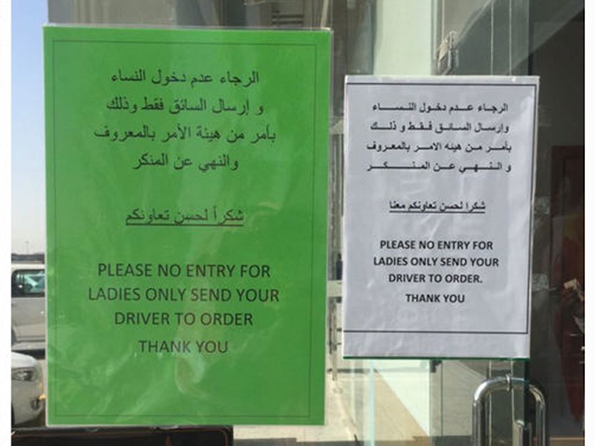 No surprise that the ban sent social media into a frenzy with women in Saudi Arabia, and around the world, posting and sharing images of the notice on Twitter with one saying: “This is so 200 years ago #Starbucks #SaudiArabia“ 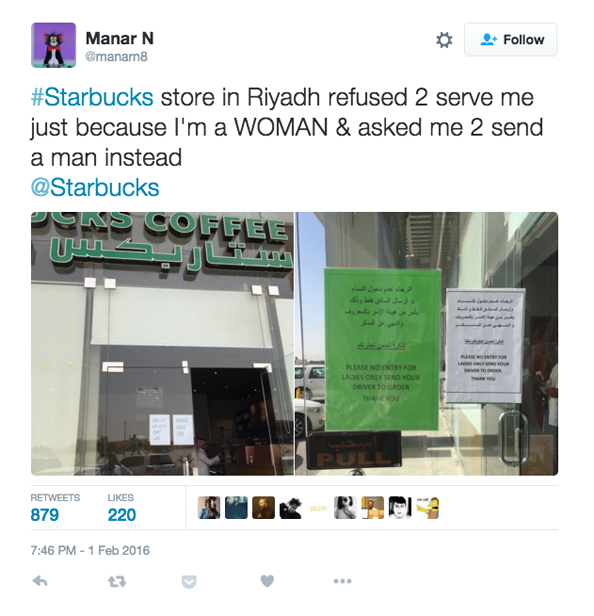 According to local customs, men and women are banned from mixing together in many restaurants and cafes, with some having barriers to separate families and women from single men.

The Starbucks logo in Saudi

This is not the first time that Saudi Arabia’s Starbucks has been in the press, the brand made news last year when it was revealed that the iconic twin-tailed mermaid logo was censored to fit the country’s laws.

Related Story: Meet The First Saudi Woman To Stand On Top Of The World

So while women may have been given the rights to vote in Saudi Arabia, there’s still a long way to go until equal rights comes into play. Women are still banned from driving despite the Women to Drive movement, which launched in 2011, staging several protests where defiant women drive anyway.