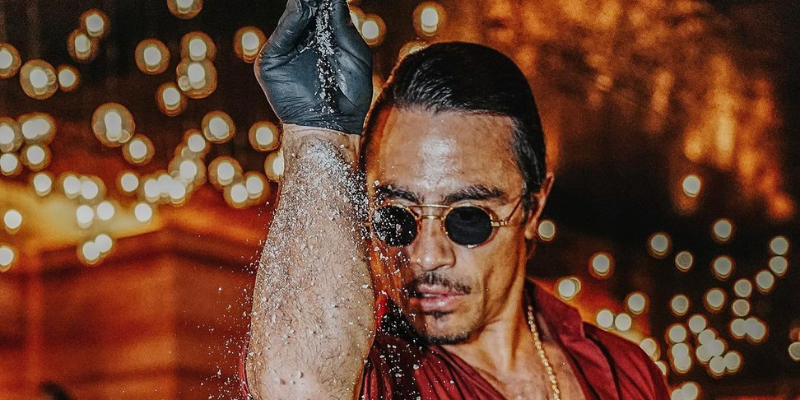 After bidding farewell to the popular Nusr-Et Steakhouse branch in Knightsbridge, London, Salt Bae is embarking on a new journey in Saudi Arabia.

Nusret Gökçe, the proud owner of several steak houses across Europe and the Middle East is now heading to the Kingdom’s capital to open his 28th restaurant.

Celebrities are often seen flouting to the internet-famous chef, who slices up meat at their table. The undeniable hype centred around this culinary superstar has taken him places with his seasoning techniques going viral.

From gold-flaked steaks to hot-plate-fired and buttered-up dishes, patrons from around the world are keen fans of this concept as the gastronomic circus continues to garner a vast social media attraction.

With his chains including restaurants at Al Maryah Island in Abu Dhabi and Jumeirah 2 in Dubai, where he’s made personal appearances himself to entertain VIP guests and several A-listers from around the globe.

Salt Bae shared a picture of himself holding a gold-covered Tomahawk steak, where he said, “Sunday is my last day in London. I will go to Riyadh to open my 28th restaurant.”

With more details yet to be shared, his loyal fan base has kept a close watch on the next branch to head over to in a different part of the world.

The viral sensation has undoubtedly impressed many celebrity A-listers around the world and become a hit amongst the royal crowd. From His Highness Sheikh Mohamed bin Zayed Al Nahyan, the Crown Prince of Abu Dhabi to His Highness Sheikh Mohammed bin Rashid Al Maktoum, Vice President and President and Prime Minister of the UAE and Ruler of Dubai, several royals have given their stamp of approval.

For more information or to make a booking visit nusr-et.com/tr