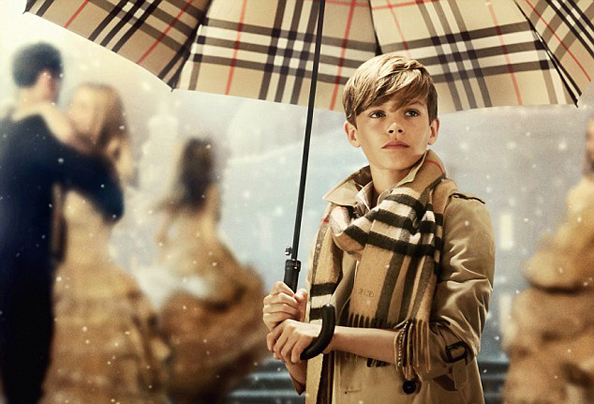 He might only be 12 years old but Romeo Beckham, the handsome son of former footballer David Beckham and designer Victoria Beckham is the face of Burberry’s new festive campaign, a year after making his modelling debut for the brand.

Romeo Beckham, who is the second eldest son of David and Victoria Beckham, was handpicked by Burberry’s  Chief Creative Officer, Christopher Bailey, for the second time, to star in the British label’s festive campaign, From London With Love. As well as posing in the campaign shots, Romeo also stars in a short film, which takes the audience on magical, and musical, adventure. Wearing the iconic Burberry trench, monogramed scarf and tall umbrella, which almost dwarfed the youngster, he looks every inch a model.

The short Burberry film is set against a theatrical London backdrop, which comes alive with over 50 dancers. Inspired by cinematic musicals the story celebrates the idea of gifting, highlighting it as a connection between people. Romeo is the main star of the film as it follows him running and dancing (he has some impressive moves) through ‘London’ delivering a gift of love. The soundtrack, which was written and recorded by British musician Ed Harcourt, is now available on iTunes. The Way That I Live – Single – Ed Harcourt

Christopher Bailey said about the campaign: ‘This festive campaign is a celebration of everything we love at Burberry; the trench coat, the cashmere scarf, incredible music, our British weather, and working with great and talented people. It continues to be an utter joy working with Romeo – he has charm, style and great energy! I’m delighted that he’s the lead role in our festive campaign.” 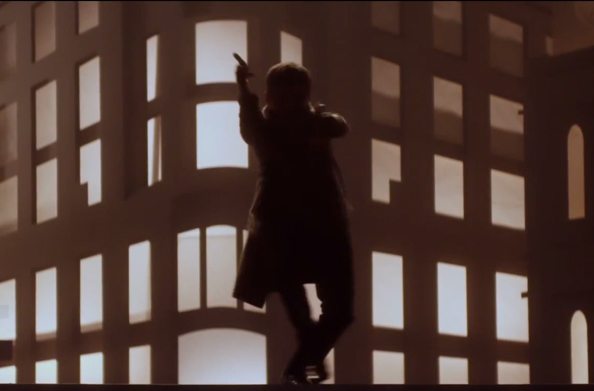 Romeo, who dad David calls “the fashion one,” and who inspired his mum’s autumn/winter 2012 collection, helped boost Burberry sales by 13 per cent in his last brand campaign (spring/summer 2013) in which he starred alongside Cara Delevingne. There’s no doubt Bailey wants to emulate that success.

One thing is for sure though, with his adorable three-year-old sister, Harper, already upstaging their mum, Victoria, when sitting front row at all of the main shows at international fashion weeks, Romeo’s latest modelling stint firmly ensures that the second-generation Beckham clan are, once again, at the forefront of fashion.