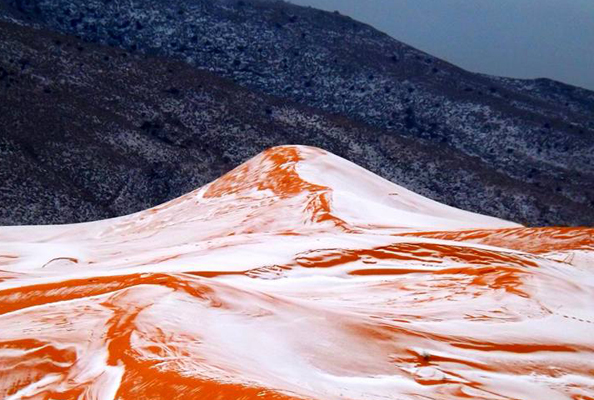 The world’s largest desert sees a dusting of snow for the first time in 37 years.

It’s not often you see rolling red sand dunes transformed into a winter wonderland – but that’s exactly what the Sahara looks like this week.

The world’s largest hot desert has received a rare coating of snow, and the magical covering was captured beautifully by amateur photographer Karim Bouchetata.

The snapper caught the unexpected imagery in the town of Ain Sefra, Algeria, on December 19, marking the first time the Sahara has seen snow in almost 40 years.

Read:
There’s Snow In Saudi Arabia… And This Guy Is Definitely Making The Most Of It
We Want To Fly First Class Just So We Can Wear These

The desert last had an icy dusting in February 1979, in a snow storm that lasted just 30 minutes, The Telegraph reported.

“Everyone was stunned to see snow falling in the desert, it is such a rare occurrence,” he said.

“It looked amazing as the snow settled on the sand and made a great set of photos.”

Read:
Does Lindsay Lohan Live In Dubai Now? Apparently So…
YouTube Star Claims He Was Kicked Off A Plane For Speaking Arabic

While the snow itself was rare, Ain Sefra often reaches lows of around 3 degrees Celsius in the winter.

The desert itself spreads across several countries including Chad, Egypt, Libya, Morocco, Niger, and Tunisia, and sees scorching highs of up to 47C in the summer.