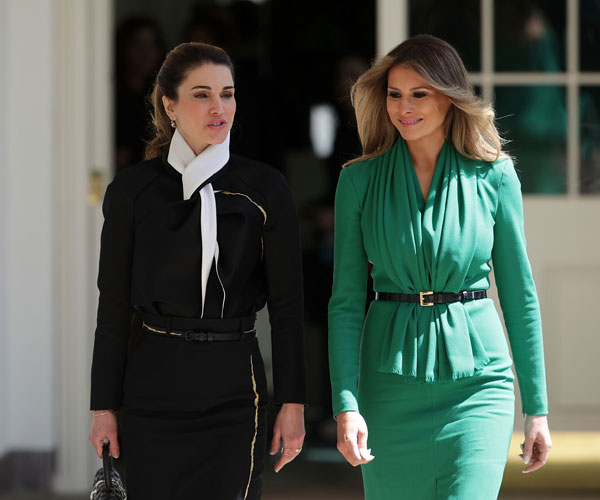 Was the First Lady’s outfit a subtle example of fashion diplomacy?

Standing beside one of the world’s most stylish royals is undoubtedly an intimidating prospect, but Melania Trump still managed to turn heads when meeting with Queen Rania of Jordan this week.

The Queen was in Washington, D.C with her husband, King Abdullah II, who met with President Donald Trump at the White House on Wednesday – their second meeting since Trump’s inauguration in January.

As the King and President held talks, the Queen and First Lady toured an all-girls school, the Excel Academy Public Charter School. The pair stopped by an art class, before observing a science lesson.

Queen Rania – herself an education activist – appeared to do most of the talking during the visit, asking the school’s principal about the curriculum and coursework.

Trump later said in a written statement that education helped “shine a light” on gender equality and empowerment of women, and Excel Academy was an “exceptional example” of a school that is preparing young women to “succeed in a global community.”

Earlier, the couples met in the Oval Office to discuss the war in Syria and anti-terrorism measures. Both leaders posed for photos with their wives standing in the background, an arrangement that was criticised by some on social media as “weird”. 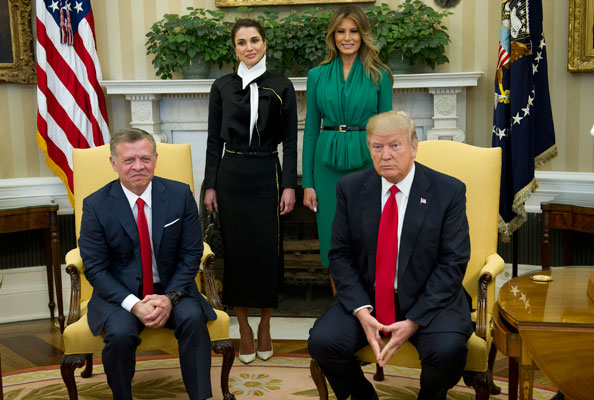 However, the First Lady received praise for her outfit choice – a green dress designed by Hervé Pierre. Pierre was also the designer behind Trump’s stunning ivory Inauguration Ball gown.

In an analysis for the Telegraph, fashion editor Bethan Holt said the emerald dress may have been a respectful nod towards the royal, as green is one of the colours of Jordan’s flag. Green is also important to Muslims, as it is said to have been a favourite of Prophet Muhammad (peace be upon him).