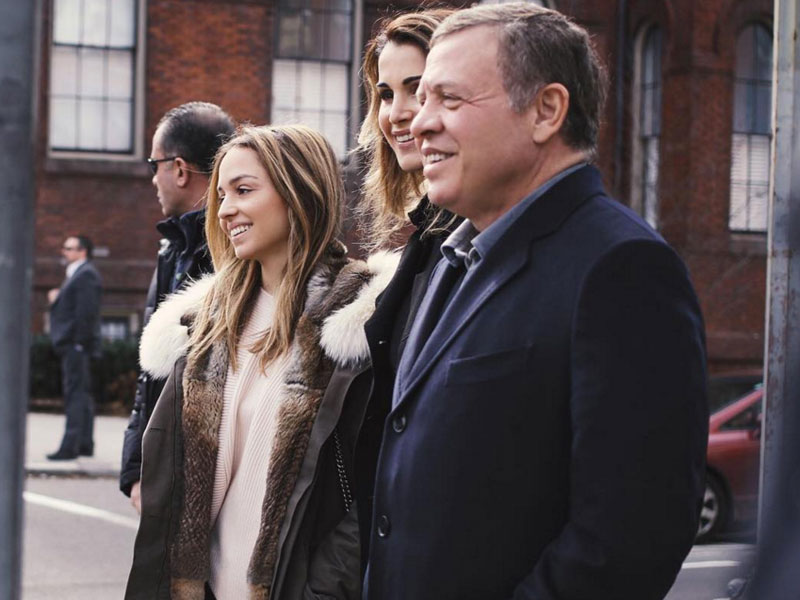 Princess Iman made her parents’ day with a surprise birthday visit while the couple were in the USA.

January 30 is a big day for the Jordanian royal family, with both King Abdullah II and his son, Prince Hashem, sharing the same birthday.

This year was extra special for the royals – who were turning 55 and 11 respectively – as they received an unexpected visit from Princess Iman, who is currently attending Georgetown University in Washington, DC.

The couple are currently in the States for meetings with government officials and members of Congress, including new Vice-President Mike Pence, but apparently weren’t expecting the drop-in from their second-eldest child.

Queen Rania posted some candid snaps of the happy occasion to Instagram, showing the 20-year-old enjoying some quality time with her father – and looking effortlessly stylish in a pink sweater and fur-trimmed winter coat.

“What a lovely surprise! A special visit from Iman to celebrate His Majesty’s birthday,” she wrote.

The queen also shared a touching photo of the birthday boys, with the caption: “Happy birthday to my two loves”.

Shared birthdays are a common theme in the Jordanian royal family.

Princess Iman’s birthday is on September 27 – just one day after her younger sister, Princess Salma, who will turn 17 this year.

The sisters also have an older brother, 22-year-old Crown Prince Hussein, who celebrates his birthday on June 28.

And just so you can complete your royal birthday book, Queen Rania’s birthday is on August 31.