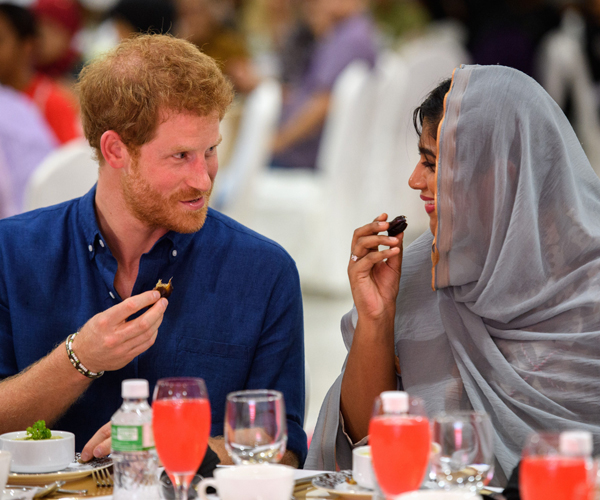 The British royal shared a fast-breaking feast with tens of youths at a community centre in Singapore.

He kept his head bowed during the call to prayer, before then biting into a single date.

Prince Harry certainly proved he knew the ropes of a traditional iftar, as he shared fruit and porridge with Singapore’s Muslim community on Sunday.

The British royal, who is fifth in line to the throne, is currently visiting the Asian island during a five-day mission to Singapore and Australia. 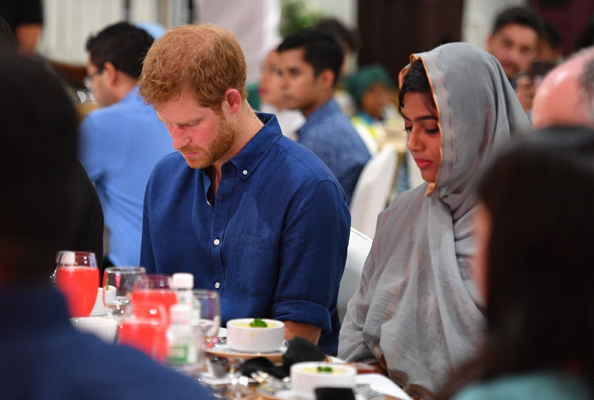 Read:
12 Of Our Favourite Dubai Restaurants Open During Ramadan Days
Here Are Four Simple Ways You Can Pay It Forward This Ramadan…

The 32-year-old joined around 80 youths breaking their Ramadan fast at a community centre run by local welfare organisation Jamiyah Singapore.

The royal, who was pictured chatting and laughing with Muslim Youth Ambassador of Peace Nazhath Faheema, waited until 7.11pm before tucking into dates and bubur. 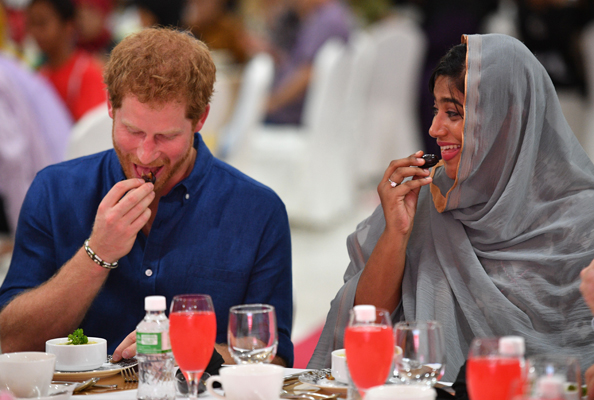 Before the meal began, attendees shared a sombre moment as prayers were offered for those affected by Saturday’s devastating acts of extremism in London.

“Our thoughts go out to the families of the victims of the London terror attack last night,” Muhammad Rafiuddin Ismail, secretary general of Jamiyah Singapore, told the crowd, according to The Telegraph.

“Let peace and harmony prevail in communities all over the world,” he added, after the attack which claimed seven lives and left many more injured.

Prior to the sun setting, Prince Harry was greeted at the centre by drummers and a flower-strewn pathway, before being presented with a robe for the regionally-practiced martial art of silat.

The prince is on a two-day visit to Singapore, where he’s been participating in charity events and awareness activities.

HRH #Prince Harry is given a tour of the @afa_singapore Mobile Testing Van. #UKRoyalSG pic.twitter.com/wNJ0K2wMOq

He visited a mobile testing clinic for HIV/AIDS earlier in the day, and attended an AIDS charity reception at the British High Commission.

Prince Harry will also play in the Sentebale Polo Cup on Monday, an annual sporting event that raises funds for HIV charity Sentebale.

The royal set up the charity in 2006, in a bid to support orphans and vulnerable children in Lesotho and Botswana, and this year the Cup is being held in Singapore.

Following the event, Prince Harry will travel on to Australia, where he’ll promote the Invictus Games scheduled to be held in Sydney next year.

The multi-sport event, which is open to wounded, injured and sick armed service personnel and veterans, was founded by the royal in 2014.