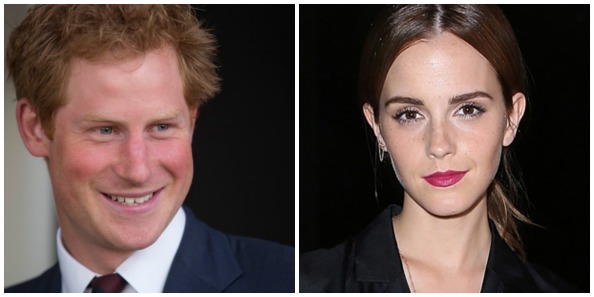 Rumour has it one of Britain’s most eligible bachelors, Prince Harry, is off the market, with the royal said to be dating Harry Potter star Emma Watson. According to sources at Australian women’s magazine, Women’s Daily, the newly single 30-year old prince emailed the 24-year-old actress after hearing about her recent split from Oxford University rugby player boyfriend, Matthew Janney. It’s believed Prince Harry, who has mutual friends with actress Emma Watson, asked to be set up with the former Burberry model, and followed up with an email informing her that he would “like to get to know her”. A group meeting with 12 other friends was arranged and an insider explained that ‘’Harry didn’t want her to feel like she was put on the spot’’.

Emma, a graduate of top American Brown University, is no stranger to the royals having already met with Harry’s brother Prince William last year at a gala dinner he threw to celebrate the Royal Marsden. She has also been introduced to Harry’s father Prince Charles. It’s believed that the Prince is rumoured to be “smitten” with the actress and admires her humanitarian efforts, which he can relate to with his own mother’s (Princess Diana’s) past charity work. The English rose was appointed UN Women Goodwill Ambassador in July last year. She actively dedicates her efforts toward the empowerment of young women and gender equality.

Considered one of Britain’s hottest bachelors, Prince Harry has been linked to a string of beauties including various models and celebrities. His first serious and high profile relationship was with the daughter of South African businessman Charles Davy’s daughter, Chelsy Davy. The turbulent six-year relationship ended in 2010. Two years later and the Prince began dating blonde student – Cressida Bonas, who he was introduced to by his cousin Princess Eugenie back in 2012. The couple had a two-year on-and-off again relationship, which ended amicably in 2014. In the past,  the handsome red-haired royal has even been associated with The Saturday’s pop star, Mollie King and linked to wild-child model Cara Delevingne.

Although the rumours surrounding Harry and Emma are unverified, we’re certain they have what it takes to become the next British power couple. Emirates Woman will be keeping an eye on these two.