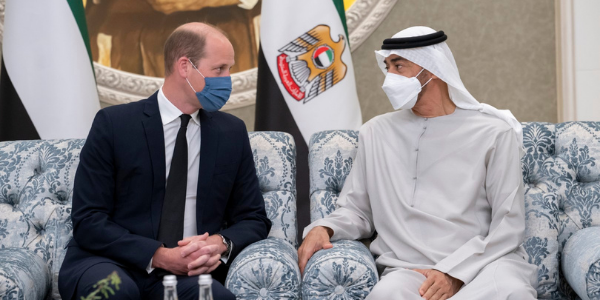 Many dignitaries from around the world arrived in the UAE over the weekend to pay their respects to the new President of the UAE.

Prince William, the Duke of Cambridge, was one of the many who touched down in the UAE to share his condolences with Sheikh Mohamed bin Zayed in the wake of his elder brother’s passing.

Queen Elizabeth II, who has been having some mobility issues as of late, issued a statement following Sheikh Khalifa’s passing on Friday.

“He will be long remembered by all who work for regional stability, understanding between nations and between faiths, and for the conservation cause. I offer Your Highness my sincere condolences and I extend my sympathy to the people of the United Arab Emirates.”

The Queen has sent a message of condolence following the passing of His Highness Sheikh Khalifa bin Zayed Al Nahyan, President of the United Arab Emirates and Ruler of Abu Dhabi:

Over the weekend, a council meeting was held at Al Mushrif Palace in Abu Dhabi, chaired by His Highness Sheikh Mohammed bin Rashid Al Maktoum, the Vice President and Prime Minister of the UAE and Ruler of Dubai, where Sheikh Mohamed bin Zayed was unanimously elected as President of the UAE.

Sheikh Mohamed bin Zayed’s election as president comes after the passing of his elder brother.