Paris Fashion Week | Round Up 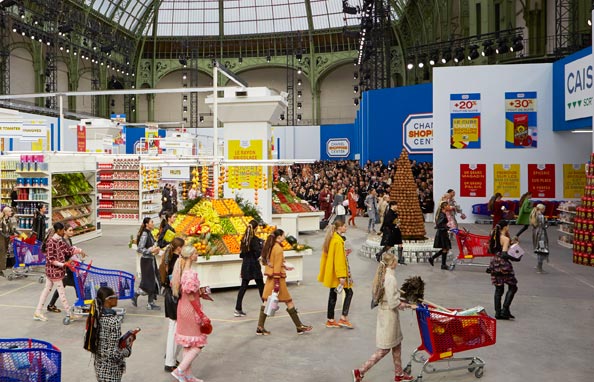 The last nine days have been filled with breathtaking collections, sartorial A-lister’s and fabulous parties as Paris Fashion Week took over the French Capital, with the world’s most stylish flocking to see the A/W14 collections from the luxury fashion houses and edgy French labels.

Paris Fashion Week is the definitive voice of the season and home to the world’s best fashion designers and it didn’t fail to deliver this year proving that it is still the crème de la crème when it comes to leading the way in the world of fashion.

At Givenchy we were sent into a magical universe as Riccardo Tisci wowed us with his dreamy collection giving us heavenly watercolour shirtdresses in a beautifully intimate setting. We were then transcended back into the 1970s at Céline, channelling our inner hippy as we watched the models parade down the runways in glittering flares and ribbed sweaters. Next stop we went for a spot of grocery shopping with Karl Lagerfeld at Chanel’s very own supermarket in which the models didn’t just walk the runway, they shopped in it, too.

Ditching their sour-faced stereotypes, the models were also having lots of fun this season. It was all singing and dancing at Stella McCartney as Cara Delevingne and Joan Smalls skipped down the runway for the finale while Kim Kardashian’s sisterKendal Jenner made her Paris Fashion Week debut walking for Givenchy and Chanel. She said of her debut: “[I’m] literally living her dream.”

Here are EW’s highlights from Paris Fashion Week round up.

A boyish charm mixed with a sporty attitude and a tiny hint of the usual Chloé femininity, best sums up Claire Waight Keller’s autumn collection. Showing a “more mysterious and wilder side to the Chloé girl,” the flirty, girly days of soft sheer pleats are long gone and have been replaced with masculine cut blanket coats, trims of gold geometric hardware and fuzzy fringed textures. Claire’s collection has certainly brought out our wilder side as we find ourselves lusting after the animal print shaggy fur coat. 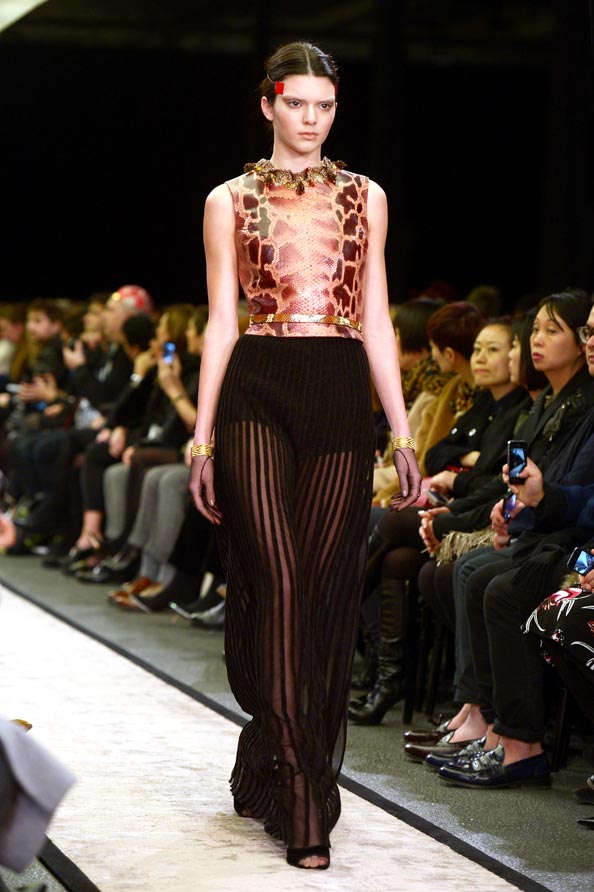 Those famous designer sweatshirts were nowhere to be seen, but that didn’t matter as we were spellbound by Riccardo Tisci’s all grown-up, beautifully feminine A/W14 collection. “This time it was about celebrating elegance and bon ton,” he said backstage. The opening looks set the new mood as models walked down the carpeted catwalk in semi-sheer chiffon dresses that were softly printed followed by powerfully cut suits and high-waisted pants. We think this could be his best collection yet. 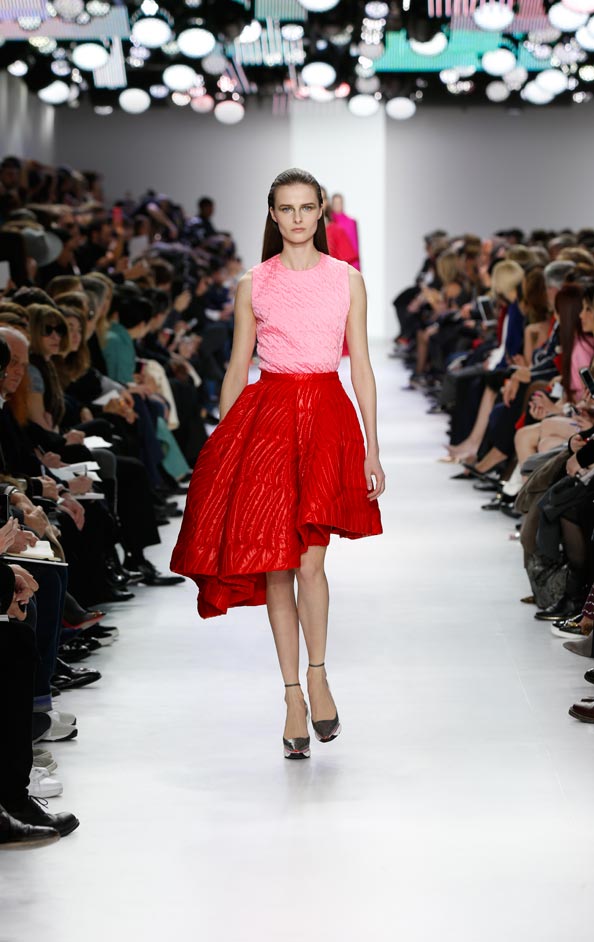 Hosted by Raf Simons at the Musée Rodin, Dior’s A/W14 show was a combination of masculine and feminine tailoring that showed off his creative talent. We saw impeccably-cut jackets offered in peach, daffodil and royal blue along with quilted silk cocktail dresses with flowing peplum hems, while the show finished with an array of beautiful, sparkling and layered sheath gowns. This collection was a perfect balance of soft and sharp pieces. 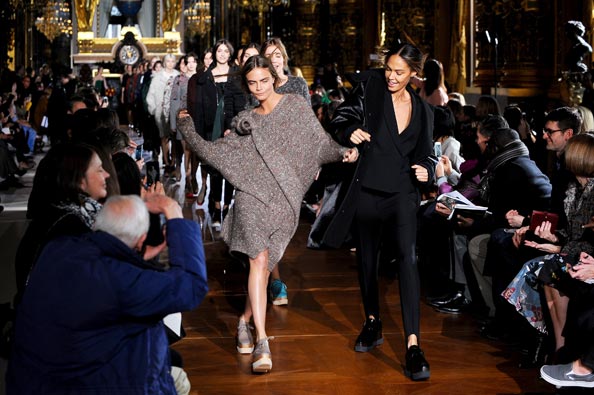 We thought they would never make a comeback, but they have. The 1990s stirrup pant hasn’t been seen for over a decade but Stella McCartney showcased her version teamed up with double breasted jackets, motif shirts and oversized coats. Dare say we actually quite like them?

Returning to her minimalist aesthetic this season, Phoebe Philo’s A/W14 collection for Céline was fresh and sophisticated with masculine elements. “I started from menswear, and then found the feminine, going deeper into fabrics and silhouettes,” she said.  Fluid, split skirts and long sweaters together with diagonal colour blocks and gingham prints made a big statement on the runway. 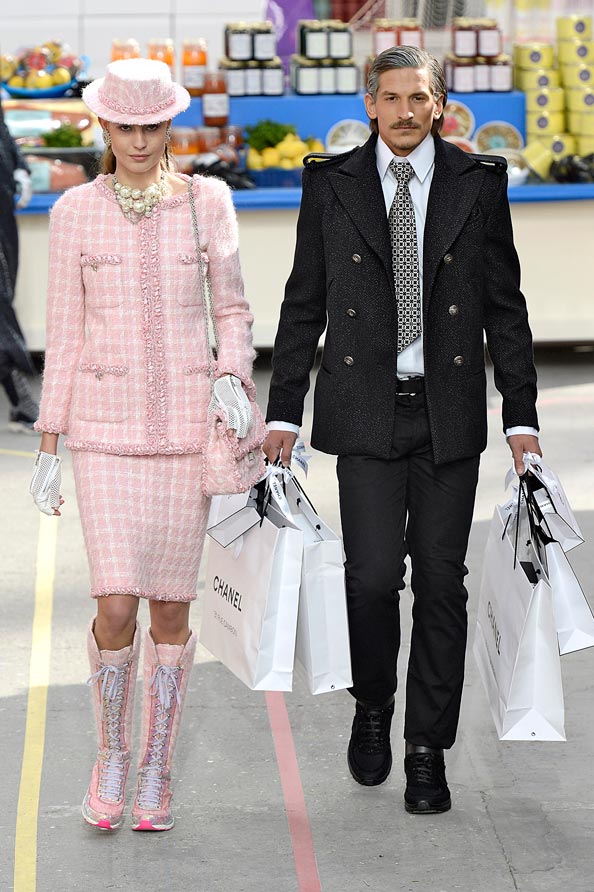 King Karl never fails to impress and he gave us another show to remember. Staged in a Chanel supermarket with products aptly labelled ‘Chanel’, who would have thought grocery shopping could be so stylish. Models wore skirts over trousers, oversized sweaters and pastel coloured skinny tracksuits with trainers. “Women don’t go shopping in stilettos” says Karl Lagerfeld. We wouldn’t mind doing our weekly shopping in Chanel comfort. 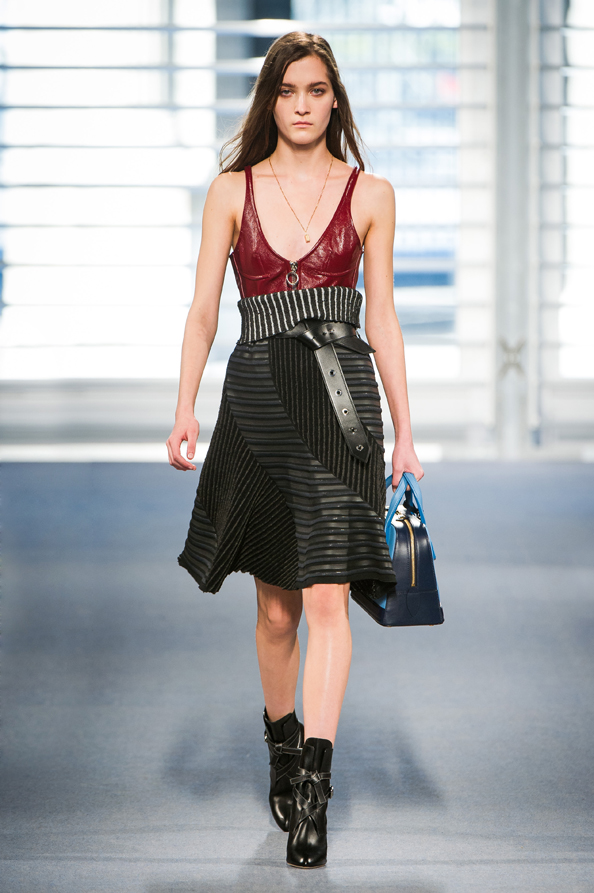 Former designer for Balenciaga, Nicolas Ghesquiere had a lot to live up to as the new Creative Director of Louis Vuitton, following Marc Jacobs’ s finale last season. Debuting his first collection for Louis Vuitton, which was set in the iconic Louvre museum he welcomed his audience with a beautiful letter which praised the work of Marc Jacobs and spoke of his “immense joy at being here” before thanking the audience for their support.  The highly anticipated collection lived up to expectations as we saw combinations of low-cut leather bodices teamed with A-line skirts, sleeveless jackets and dresses and high-waisted patent leather trousers. A signature looped waist belt completed the looks.