This is how Dubai’s Palm Jumeirah looks from space 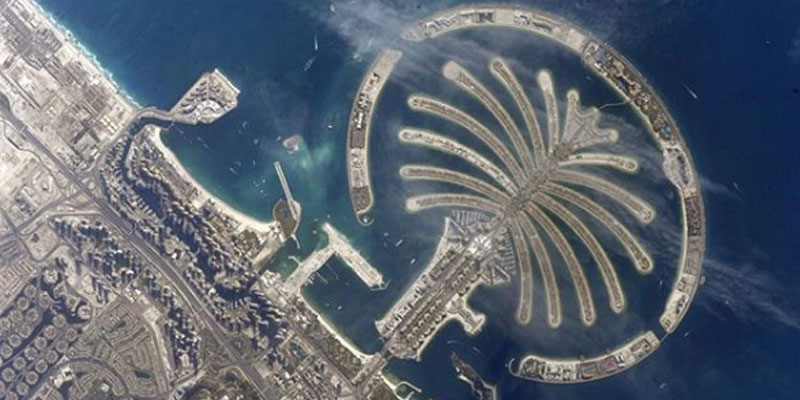 Russian astronaut Oleg Artemyev gives us an all-new perspective on this archipelago.

We have a confession to make. Working from an office located only a few hundred metres away from the Palm Jumeirah means we’re often jaded by the views of it and fail to realise just how special this man-made island really is.

Read:
Mesmerising photos of Dubai & Abu Dhabi from space
This HD video of Dubai was shot from space

Well, sometimes all it takes is a little perspective. Even if that perspective comes from 400 kilometres above the earth’s surface. Yesterday, Russian space engineer Oleg Artemyev posted on his Instagram this brilliant image of the Palm Jumeirah.

Artemyev has posted several images of the earth from space. But the image of the Palm Jumeirah has racked up the most number of likes from his 198k followers. As far as we can tell, the only other image on his profile that has generated nearly as much excitement is one of the neon Aurora.

The Palm Jumeirah has several residential properties and five-star hotels dotted along its trunk and palms and is touted as the world’s largest man-made island.

Constructed by Nakheel, it is built by reclaiming land and extends into the Persian Gulf.

This is not the first time we’ve seen some fantastic imagery of Dubai from space. Two years ago, an HD video shot from cameras mounted on the International Space Station gave us a whole new view of the city’s Downtown area.

The clarity of that video was so spectacular, that you could actually see cars zipping down Sheikh Zayed Road.

A few years ago, Italian astronaut Ignazio Magnani tweeted images of Dubai and Abu Dhabi as viewed from space. The images showed Dubai by night with the entire city lit up.

The UAE has ambitious plans to make it into space. Saeed Al Gergawi has been heading up the Emirates Mars Mission that intends to launch a Mars exploration probe as early as 2020.

As for Italian and Russian astronauts taking pictures of Dubai from space, we know that it is only a matter of time before an Emirati astronaut takes to space.

According to a report in Khaleej Times, the UAE is expected to have its first Emirati astronaut by the end of this year who will then be trained and sent into space by 2021.