Following in the footsteps of her sisters Kendall and Kylie Jenner, Kim Kardashian is publishing a book, but hers will be a book of pictures… all featuring herself.

The aptly named Selfish is a 352-page book containing selfie images taken by Kim of herself, obviously.

The reality star claims the book was inspired by a series of saucy Valentine’s Day images she took for her husband Kanye West. “It ended up turning out so cool that we come up with this idea to do a book, a selfie book,” she explained.

Kim has previously joked that “[taking selfies] is the purpose of life.”

Ultimo businesswoman Michelle Mone is having her life turned into a film.

The 42-year-old made the announcement on her Twitter page, saying:  “Delighted to announce that I signed a Global deal today for my book and film rights. I need to have all copy in by 18th Oct, launch Feb 15.”

The story will cover her humble beginnings in Glasgow to running a multi-million dirham underwear empire. Decisions have yet been made as to who will play the mother-of-three.

In the wake of US air strikes in the Kurdish region of Iraq, against ISIS, supporters of the Islamic Jihadists launched a counter attack on social media.

Using the hashtag #AmessagefromISIStoUS, supporters of the group tweeted thousands of messages featuring images of dead soldiers and citizens along with threats. 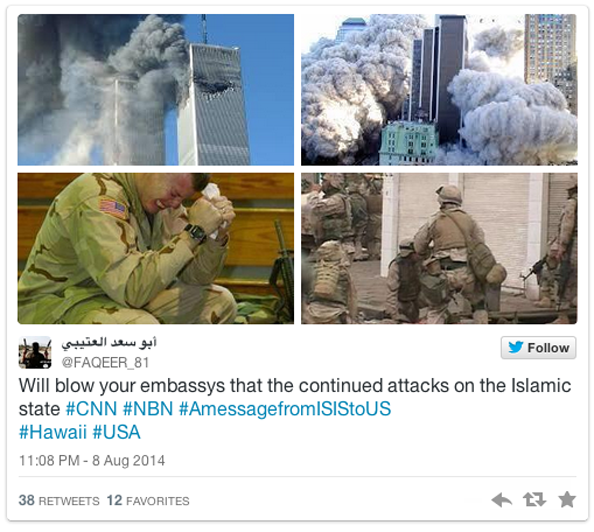 The attacks from the Americans come as an attempt to prevent potential genocide with an estimated 40,00 Yazidi and Christian minorities besieged on Mount Sinjar.

US forces have been supplying food and water to the Iraqis trapped by ISIS.

The couple who have two children together cited a irretrievable breakdown of the relationship. While Tea will have primary physical custody of their children, the couple, who both reside in New York, have joint legal custody.

It seems no one is immune to the Ryan Gosling effect, even Jane Fonda has succumbed to his good looks.

This week the 76-year-old actress was spotted arriving on set carrying a chair boasting an image of Ryan’s face on its seat. The chair cost US$299 from gilt.com and we’re guessing it’s selling like hot cakes.

FROM BROADWAY TO THE SUBWAY WITH THE LION KING CAST

The weekday commute can be tedious but not for some New Yorkers who were lucky enough to catch the A train with the cast of Broadway’s The Lion King.

The Tony Award-winning cast, dressed in their regular clothes, shocked commuters by breaking out into song, performing The Circle of Life. Here’s the clip:

Though it turns out their idea wasn’t so original, with the Australian cast taking it miles high and offering a private performance for commuters on a flight from Brisbane to Sydney, though these passengers don’t seem as impressed.

The 28-year-old was seen showing off her new bling while dining in a restaurant on the island of Mykanos, Greece.

It is not known whether Lindsay, who is trying to get her life back on track, has been dating anyone, making the appearance of the ring even more surprising.

Meanwhile, away from her love life, her career seems to be picking up with Lindsay set to write an autobiography, promising to literary agents her story will make their jaws drop. Now that we believe.