Here’s our edited roundup of the news stories you need to know about this week – the what, who, where and whens…HAMAS REFUSES DEAL TO EXTEND CEASEFIRE

Hamas resumed rocket fire towards Israel hours after rejecting the United Nations-backed extension of the humanitarian truce, which saw a 12-hour ceasefire over the weekend. Hamas said tanks and Israeli troops need to be removed from the Gaza strip before they consider the truce extension.

The ceasefire would have been prolonged until midnight tonight, although troops would continue to demolish Hamas tunnels.

“No humanitarian ceasefire is valid without Israeli tanks withdrawing from the Gaza Strip and without residents being able to return to their homes and ambulances carrying bodies being able to freely move around in Gaza,” said a Hamas spokesman.

According to Sky News “more than 1,000 Palestinians have now died since Israel launched a military operation 19 days ago.”

During the 12-hour ceasefire, which took place on Saturday, guns fell silent and a surge of Palestinians returned to their homes to assess the damage – they were met by pure devastation. One said to The Guardian: “It is the first time that we have managed to come back. We’re staying in the UN school in Jabaliya. We came to get clothes for the children. But there is nothing left.”

The war has sparked protests across the globe with people in Tehran, London, Paris and Islamabad taking to the streets to  protest against the Israeli attacks on Gaza.

Pilot Douglas Gotterba, who worked on actor John Travolta‘s airline Alto has been allowed to make a case that he has no confidentiality agreement covering his employment with the former Grease star.

According to The Hollywood Reporter, Douglas Gotterba decided to “tell the story of his life” after being “unwillingly thrust” into the spotlight by revelations from another former employee of the star. Douglas claims he didn’t sign a confidentiality agreement, which, if true, will allow him the freedom to write a book about his life, in which it is said he will discuss an alleged relationship with John Travolta, which he claims was more than professional.

High street bridge brand Banana Republic is renowned for it’s uber-chic collaborations, and it most recent with designer Roland Mouret is said to be the most anticipated to date.

The collection, which is set to be released in August, contains the French man’s signature style – think body-con and figure hugging lines.

Among the standout pieces is a black and white dress with a hemline that hits just below the knee, while the colour palette is an elegant black and white with accents of pink and navy.

They are two of the most powerful women in the world but the recent actions of Michelle Obama and Queen Elizabeth II proves that everyone loves a good opportunity to photobomb.

First up was First Lady Michelle, who along with her daughter, got caught in the background of a fan’s selfie at the Beyonce & Jay-Z concert. Meanwhile the British Queen appeared to be photobombing in a selfie taken by athletes at the recent Commonwealth Games. 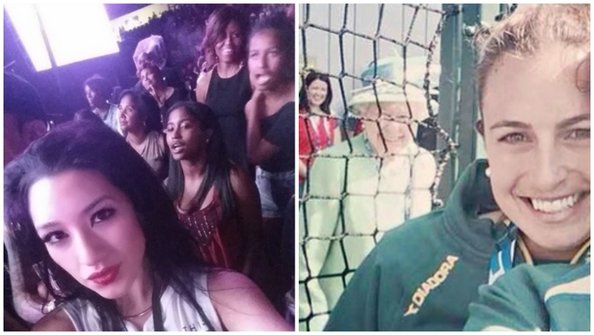 The black box of Air Algerie flight, which crashed en route from Ouagadougou in Burkina Faso to Algiers, has been located by officials and indicates poor weather as cause of the crash that claimed 116 lives.

Over half of the victims were French. President Francois Hollande of  France later confirmed there were no survivors.

Investigators at the scene say the MD-83 airliner broke apart when it hit the ground, making it unlikely to have been the victim of any attack.

Legendary soul singer Aretha Franklin was left fuming after a server at a Johnny Rockets diner in Ontario failed to show her respect.

The singer had just finished a concert in nearby Lewiston when she stopped at the restaurant to order a hamburger and cherry Coke to ‘take out’. While waiting for her food the 72 year old sat down at one of the many empty tables, which angered the waitress in her mid-30s.

“She said: ‘You can’t sit there.'” explained Aretha. “I said: ‘Excuse me, what do you mean I can’t sit here?” The waitress explained the seats were only for people who wanted to eat in.

“You can’t have it here because we’ve already rang you up as a takeout customer,” replied the worker who said she “didn’t care,” when the famous customer’s identity was revealed.

“I got up and walked out,” said Aretha. “I said: ‘You should eat it yourself and you pay for it.’ She’s a public servant and she shouldn’t speak that way to anybody, celebrities or non-celebrities.”

The “rude and nasty” staff member was reprimanded and Aretha vowed never to return to the diner.

Ever since her conscious uncoupling, things haven’t been going too well for Gwyneth Paltrow and it looks like things could be getting worse with her entrepreneurial e-baby, Goop, receiving some fierce competition from actress Blake Lively, who launched her own lifestyle website, Preserve.

Much like Goop, Preserve is quite self-indulgent with Blake revealing her fashion, food and cultural inspirations. While the new site might be taking attention away from Gwyneth’s Goop the actress must be a little delighted as the media have now turned on Blake and her ‘patronising’ site, which promotes a US$40 salt.

However, while it might be about all things lavish, Preserve has charitable endeavours, yet the phrasing of Blake’s “greater good” deeds have been seen as a little insincere.

The site reads: “We are aware that a lot of what we are selling is outlandish in a world where people are starving and have nowhere to sleep. This is a real problem. One that even on our high horse we can’t ignore. This is our community. Each of ours. We have set our first goal of giving 5,000 children a meal, 2,000 children a blanket, and 2,700 children a warm hoodie, all within the US.”

As a result many including Eleanor Robertson of The Guardian call the site “nauseating.”

“Rather than committing to donate a percentage of the site’s profits to charity, Preserve invites us to imagine Lively tucking 2,000 orphans into their free blankets with her own hands, perhaps patting them each tenderly on the head,” said Eleanor in a column for the newspaper. “It’s the crass noblesse oblige of new money: making a fuss over a pre-specified number of blankets and hot meals, deploying the rhetoric of community, as though Lively couldn’t personally fund 5,000 hot meals with the change in her glovebox…. She’s trying to sell small batch pickles and overpriced BBQ sauce, but what Preserve really made me want to eat was the rich.”

Perhaps, Gwyneth has nothing to worry about after all.

A group of  biologists have named a new species of water mite after Jennifer Lopez.

The scientists named the species Litarachna lopezae mite after the Bronx-born singer, explaining it was a sign of gratitude after listening to her uplifting music while conducting their research. The water mite was found at a depth of 230ft on a coral reef in Mona Passage, Puerto Rico.

“The reason behind the unusual choice of name for the new species is … simple: JLo’s songs and videos kept the team in a continuous good mood when writing the manuscript and watching World Cup Soccer 2014,” said Vladimir Pesic, from the University of Montenegro.