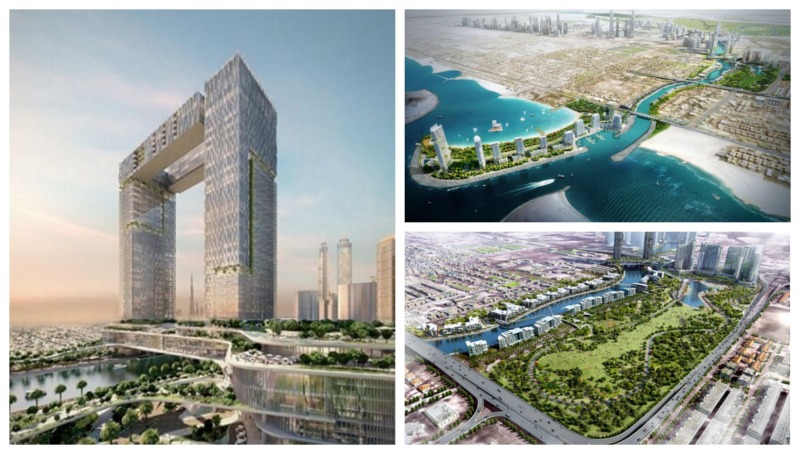 Not content on having the world’s biggest mall, or a mall with an aquarium or even a mall with a ski slope, Dubai is building a new super mall and this one will have a canal and rooftop park, naturally.

The new mall is part of the grander Dubai Canal project, an urban development that is the cause of the new flyover built over the Sheikh Zayed Road.

The mall is one of the most exciting elements of the plans. While we probably don’t really need a new shopping destination, you certainly won’t hear us complaining especially with the prospect of another green area, albeit a vertical one.

According to Gulf News, the projects will be built on “an area of 4.68 million square metres with 605,000 square metres earmarked for commercial purposes. They include 5,345 residential units and 948 hotel rooms.”

#Repost @sof_uae with @repostapp. Gate tower, the entrance to the #dubaiwatercanal co-developed by Meydan and Meraas, will consist of 500,000 square feet of retail area located in the bridge that will connect the two towers. #project#frame#meraas#meydan#developer#development#design#concept#3dmodel#construction#design#architect#dubai#CityscapeDubai#cityScape#uae#exihibition #MyUAE #Property #LuxuryProperties #LuxuryRealEstate #LuxuryLiving #canal

The mall will be three levels in the Gate Towers bridge, which is at the entrance of the canal (the new water route covers 300,000 square metres). It will feature 434 retail outlets and restaurants. Related Story: UAE Property Law – Everything You Need To Know  While it is set to contain high end and high street stores, the real piece de resistance will be the rooftop green park, which will compliment the neighbouring green space of Al Safa Park. The Gate Towers will also include a five-star hotel and luxury apartments.

The Dubai Canal project is 61 per cent complete. Director General of the Roads and Transport Authority (RTA) Mattar Al Tayer said: “Construction works for the project are expected to be completed next August.”

According to 7 Days The Walk of the Dubai Water Canal will be linked with a running track and the Walk of the Jumeirah Corniche, extending 7km.

Paths will be lit by smart lighting poles, which can be controlled smartly. The project is a great example of smart and innovative architecture and planning.