NASA Just Named An Asteroid After This Saudi Teen Scientist 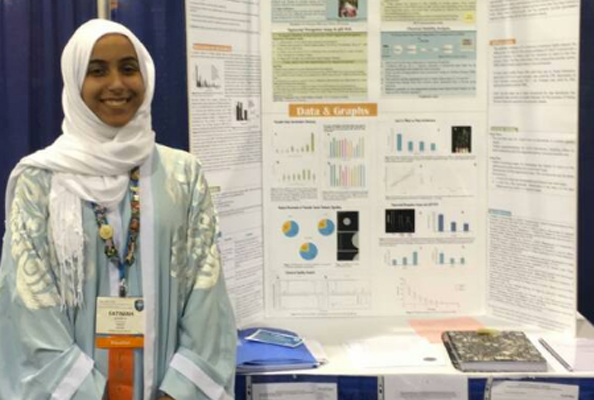 The student was given the honour in reward for her excellent research.

You might be able to buy the rights to title some of the universe’s stars, but not everyone gets to have a NASA-certified asteroid named after them.

However that’s the honour that’s just been bestowed upon one Saudi Arabian teen, who dazzled the National Aeronautics and Space Administration with her work.

Fatima Abdel-Moneim Al-Sheikh was a student at Al Faisaliah Islamic Schools in Khobar when she submitted her research to a global competition last year.

Read:
A Muslim Woman Has Just Been Crowned Miss World Australia 2017
This Impromptu Singalong On An Emirates Flight Gave Us Goosebumps

The now-19-year-old won second place at 2016’s Intel International Science and Engineering Fair (Intel ISEF) for her paper, which looked at plant hormones.

(It was titled “Determination of the effectiveness of innovative Strygolactone-Carl 2 on seed germination of parasitic weeds”, for those with more scientific nous than us).

Al-Sheikh claimed a US$1,500 (Dhs5,500) prize for her efforts at the world’s largest international pre-college science competition, where around 1,800 high-school students took part.

And now, she’s got the namesake Al-Sheikh 33535 asteroid to add to her CV.

NASA wanted to reward the teen “in recognition of her efforts and excellence in her research in botany”, the official Saudi Press Agency (SPA) reported.

Al-Sheikh, who hopes to study at Brown University in the US, told Saudi daily Okaz that she hoped her research would stop parasitic weeds causing serious damage to agricultural fields.

The teen was congratulated by Saudi Prince Turki bin Abdullah bin Abdulaziz, who urged “all the talented young Saudi people in science, research and creativity to continue along the path of innovation and excellence,” according to Gulf Business.