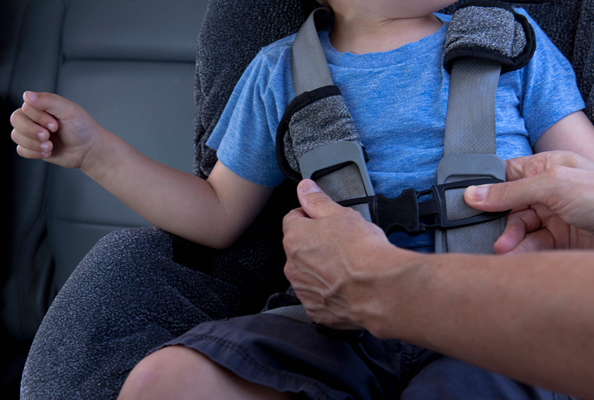 If you thought taking a taxi with a tot in tow was a no-go in Dubai – we’ve got news for you.

In a much-welcomed announcement, Dubai’s taxis and limos are about to become much more parent-friendly, with new rules stating they have to carry child seats in their vehicles.

(The number they must carry has not yet been officially confirmed, but it’ll be at least one).

Previously, child seats were a recommended, but not legally enforced, suggestion.

Read:
HH Sheikh Mohammed Hit Up This New Dubai Market Over The Weekend
This Dhs100,000 Cake Was Cooked Up Right Here In Dubai…

The move comes as part of new traffic rules that came effective from July 1, which also include a Dhs400 fine for drivers caught ferrying around passengers not wearing their seatbelts.

So yes, if a taxi driver asks you to belt up when you’re in their cab – do it (nothing’s more important than your safety after all). Drivers also now have the right to not start driving if passengers refuse to buckle up.

“Violators who do not provide children with seats in their vehicles will be stopped and advised about the safety of children,” said Al Zafeen, who is also assistant commander-in-chief of the Dubai Police for Operational Affairs.

“Reserving special seats for infants and toddlers is not common in Arab or Asian culture, but it is one that we need to adopt. The insistence of some mothers to hold their kids while sitting in the front seat is very risky. Mothers should accompany their child sitting on their car seats for maximum safety.”

Read:
This New Dhs5 Billion District Is Coming To Dubai…
This Celebrity Family Can’t Get Over A Dubai Airline’s First Class Cabins

Abdullah Yousuf Al Ali, CEO of the RTA’s Public Transport Agency, also confirmed that the change in law has been circulated to all taxi and limo companies.

The same law – and fine – applies to private cars too, which must use a child seat for kids up to the age of four, Gulf News reports.

“We are now selling as many child seats in a day as we did in a week. Many parents said they were buying a child seat because of the law,” a retailer told the newspaper.