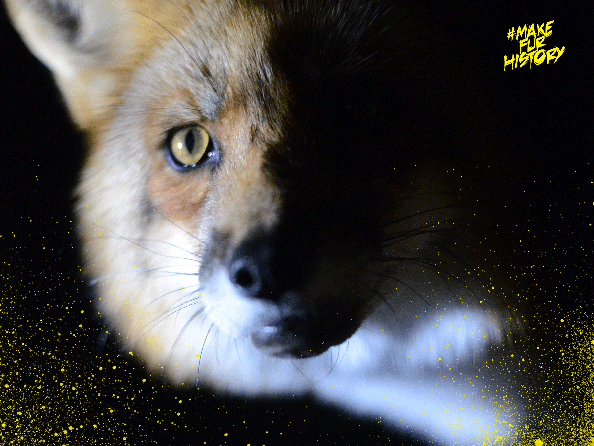 As we approach the start of winter in the Northern Hemisphere, many people will be reaching into the back of their closets for their fur-trimmed jackets, hats and earmuffs or shopping around for new styles. Many will not think twice about the origins of the fur or the animal it once belonged to, until now that is thanks to a cunning campaign by LUSH.

The dummy site furdiscouts.com lures shoppers in with a promise of bargain deals on fur products. The site features a black and white photograph of two beautiful women looking sultry wearing luxurious fur hoods and sits alongside the tagline Hot Deals Hip Fur. After a few clicks the shopper is confronted with the statistics that “over 100,000,000 animals are killed for their fur every year worldwide” and are invited to “take action” through the makefurhistory.com website and campaign.

The primary focus of LUSH’s campaign is the living conditions and treatment of mink and foxes on the ‘fur farms’ in Canada and North America. In a short video on the site, the campaign partners (The Association for the Protection of Fur-Bearing Animals (APFA) and The Montreal Society for the Prevention of Cruelty to Animals (SPCA) with the support of LUSH Cosmetics) reveal video footage of distraught animals in overcrowded, tiny and unsanitary cages. They explain, “These highly intelligent, sentient animals are prevented from fulfilling their most basic psychological and emotional needs through play, social interaction and exploration.” In the example of mink – “In the wild, mink spend up to 60 per cent of their time in the water... On fur farms, mink spend their entire lives in cages measuring 1’ by 3’, never have the chance to swim, and live crammed up against hundreds – even thousands – of other animals.”

The video also highlights the lesser-known applications of fur that many well-meaning consumers are unaware of such as certain false eyelashes and make-up brushes. According to the website in Canada there is little legislation to govern fur farms, but rather there is outdated codes governing cruelty and voluntary guidelines of conduct and the US is not much better. The EU has a much better regulated industry, but sadly China, the world’s biggest fur producer, has “virtually no laws protecting fur-bearing animals.”

It is therefore their belief that change is best enforced by an informed consumer. The site offers more information and practical advice on how to tackle these issues.

LUSH is constantly at the forefront of pioneering campaigns. In the past they have launched a campaign to erase bullying in the UAE and another to eradicate the domestication of exotic animals in the Middle East.

Many venues in the UAE are also standing up against fur with Mahiki set to follow suit from the London branch and ban it from the club. For more information about the shocking reality of fur terrorism, visit here.