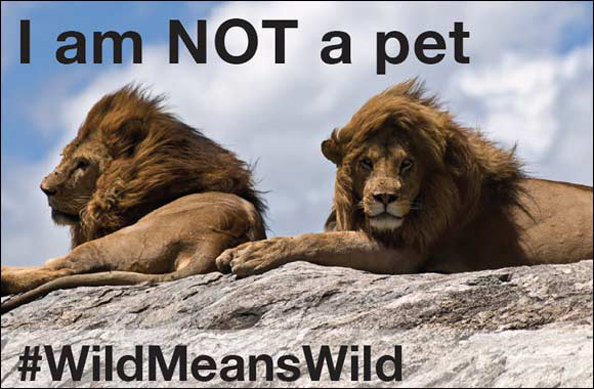 Ethical beauty brand Lush has been a long-time campaigner of animal and environmental welfare and they’re now extending their message to the Middle East with the launch of a new social media campaign titled I am NOT a pet.

Encouraging customers to spread the message with the hashtag #WildMeansWild across their Twitter and Instagram accounts, the movement will run until May 7 and aims to highlight the plight of exotic animals kept in captivity as pets in the region.

Ultimately Lush want to help decrease the demand for wild pets by engaging with the public and teaching them about the methods in which these animals are taken from the wild, the cruelty they face on the journey to the pet stores and why keeping them in a home is dangerous for both the animal and the owner.

Unfortunately the campaign is very relevant to the UAE where keeping wild animals as pets has become more commonplace in the region over the years thanks to a boom in the exotic animal trade. The most popular wild pets in the Middle East include tigers, lions and monkeys, all of which are not only at risk of by being in a domestic environment but also pose as a dangerous threat to their owners.

This is not the first time the popular beauty and wellness chain has used their voice to promote ethical causes around the world. Lush previously led a campaign against global warming last year in collaboration with fashion designer Vivienne Westwood, who created limited edition scarves for the brand.

Lush has been long-time supporters of animal rights, taking part in anti-fur, anti-whaling and anti-animal testing demonstrations around the globe. Visit their flagship store in The Dubai Mall to learn more and share the social hashtag #WildMeansWild to help raise awareness for the cause.