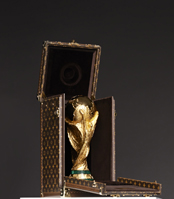 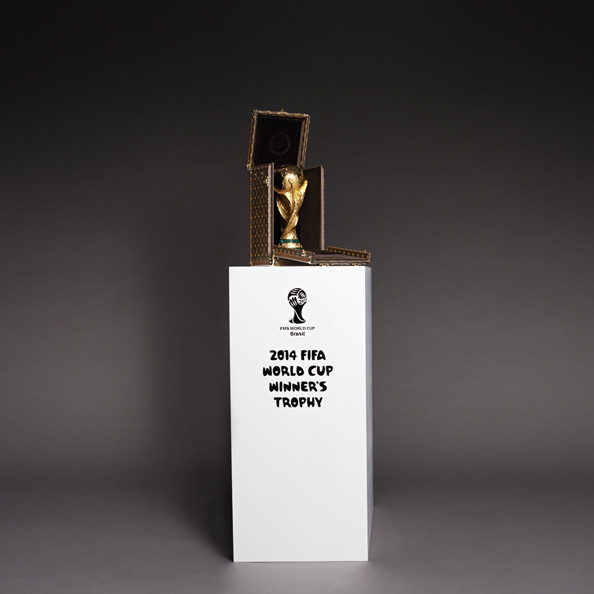 It’s only day five and for those of us who aren’t major fans of the FIFA World Cup, it’s getting a little tiring. However, Louis Vuitton  is stepping in to help make things a whole lot more fashion-girl friendly by announcing their return to the big game, designing a fashionable custom-made trunk in which to house the famous trophy.

This isn’t the first time Louis Vuitton has made an appearance at the World Cup. They originally made a trunk for the trophy in 2010 during the FIFA World Cup in South Africa. As with the first case, this year’s lavish trunk was handmade in Louis Vuitton’s historic Asnières workshop just outside of Paris. It is the company’s first workshop, which opened in 1859.

This tournament’s trunk, measuring 36cm in height and weighing 6.175kg, due to it being crafted out of solid 18-carat gold and with a base of malachite, had to be meticulously designed. Featuring Louis Vuitton’s iconic monogram canvas, and its signature brass locks and corners, the travel case has been crafted with no expense spared. Opening from the front and at the top, the design allows for the trophy to removed with ease on July 13, the final day of the FIFA World Cup, in Rio de Janeiro’s Maracana stadium, and be delivered to the captain of the winning team.

Like every special order for Louis Vuitton, this case is truly one-of-a-kind – stemming from an original idea and, like any other great projects, taking shape through detailed sketches and intricate prototypes. Using the unique imagination of its in-house designers and the rare skills of its craftsmen to create a truly exclusive piece, it fails to surprise us that only around 450 special orders are completed every year. Whether modest or ostentatious, all requests must follow the one condition that each piece must represents the spirit of travel and must protect and transport a customers belongings – the FIFA Cup Trophy case is, therefore, a flawless example.