Lindsay Lohan Dons A Burkini During Her Latest Travel Adventure 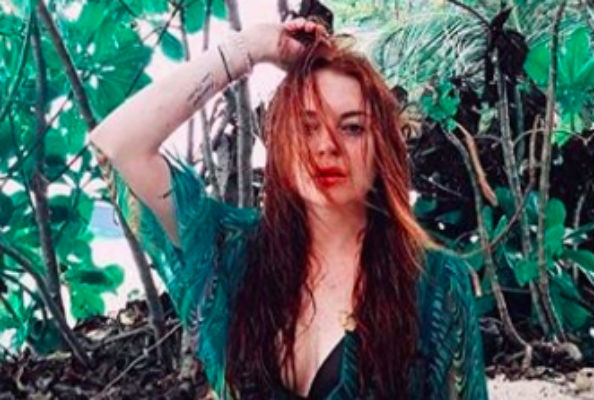 Could this be yet another hint at her upcoming modest fashion collection?

She revealed last month that she was “finding inspiration” for her new clothing line while in Thailand.

And now actress Lindsay Lohan has further demonstrated her passion for modest fashion while in the south-east Asian country, by sporting a burkini during a beach day.

In pictures exclusively obtained by the Daily Mail, the Mean Girls star wore a red-and-black modest one-piece while paddleboarding in Phuket.

Read:
Is This A First Glimpse At Lindsay Lohan’s Modest Fashion Line?
Lindsay Lohan Was ‘Stopped At Airport’ While Wearing A Hijab

Lohan also wore the attached hijab as she posed for the cameras in what appears to be a photo shoot.

It’s not known if the 30-year-old was being snapped for an upcoming magazine spread, or if she just wanted to protect her skin against the strong sun.

However, the star has shared several images from her recent travels, where she appears to have worn two-piece bikinis, rather than just modest pieces.

Regardless, her latest swimwear choice could provide a hint to her upcoming clothing collection, LOHAN by Lindsay Lohan.

The line, which doesn’t yet have a release date, is inspired by modest fashion, the actress revealed on Instagram in March.

While it’s not clear if the maxi floral dress she’s wearing forms part of the collection, it at least suggests at the kind of garb we can expect from the star’s line.

The actress first teased her sartorial endeavour in an Instagram photo where she wore a headscarf, leading many to believe her collection would include hijabs.

However, the actress’ management have denied rumours the collection will only be made up of headscarves, telling Gossip Cop it’ll be a full and global “clothing line”.

This isn’t Lohan’s first foray into fashion design – the Parent Trap star previously launched a leggings line back in 2008.

The actress, who says she hasn’t yet converted to Islam but has studied it, has worn the traditional headscarf several times in recent years, and claimed last month she was even stopped in an airport due to her hijab.

The actress spoke out about Islam after she was photographed in 2015 carrying a copy of the Quran.