Leonardo DiCaprio Gets His Steak Personally Seasoned By Salt Bae 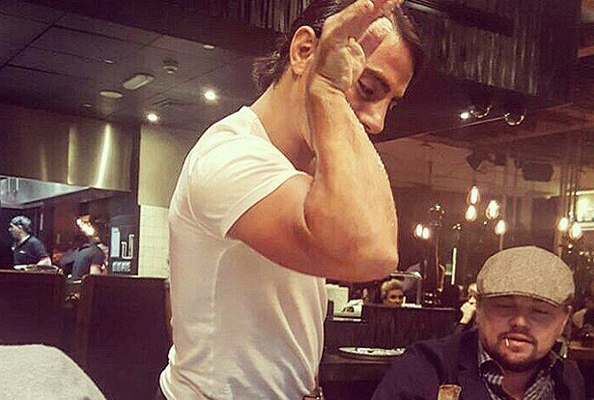 Even Oscar winners have fallen under the sodium-dusted spell of this Dubai-based chef.

Two of the internet’s most beloved meme icons met up in Dubai recently, with #SaltBae personally seasoning a steak for none other than Leonardo DiCaprio.

The Titantic actor popped into Turkish chef Nusret Gökçe’s steakhouse during his trip to the emirate last week, where the newfound Instagram celebrity put on one of his signature salt sprinklings.

Read:
#SaltBae Cooks Up A Storm For Abu Dhabi’s Crown Prince
The World Has Fallen Under The Spell Of This Dubai-Based Chef

Gökçe, who has restaurants in Dubai, Abu Dhabi and Turkey, shared an image of the pair’s meeting on his social media page, with the picture quickly garnerning more than 695,000 likes.

In the shot, DiCaprio gazed amusedly down at the massive slab of meat being anointed by the flamboyant butcher.

Wearing his signature flat cap, the 42-year-old actor was also chewing on a toothpick during the meal at Nusr-Et’s Four Seasons Hotel branch.

Gökçe only became a celebrity of sorts last month thanks to his hypnotising Instagram feed.

A particular video of the restaurant owner sensually slicing up a steak outside his Dubai eatery went well and truly viral, receiving 10 million views in just a matter of weeks – along with news articles across the world dedicated to the short clip.

Read:
This Is Where Leonardo DiCaprio Ate During His Under-The-Radar Dubai Visit
Lindsay Lohan: ‘Dubai Gives Me Silence And Focus’

His fans even gave him the moniker Salt Bae as a nod to his flourishes with the seasoning, and he’s since cooked for HH Sheikh Mohammad Bin Zayed Al Nahyan, Crown Prince of Abu Dhabi and Deputy Supreme Commander of the UAE Armed Forces.

Gökçe has also become a bit of a pop culture reference, with singer Rihanna even donning a T-shirt featuring the chef’s face.

The chef can now add another new celebrity fan to the mix thanks to DiCaprio.

The Revenant star dined at the steakhouse during a short trip to the UAE, where he also enjoyed a private tour of the emirate’s Sustainable City.

The A-lister, who’s a vocal advocate for environmentalism and green living, joined project founders on the low-key, buggy-driven adventure.

He also dined at Dubai newcomer La Môme, found on the 49th floor of the Nassima Royal Hotel on Sheikh Zayed Road. 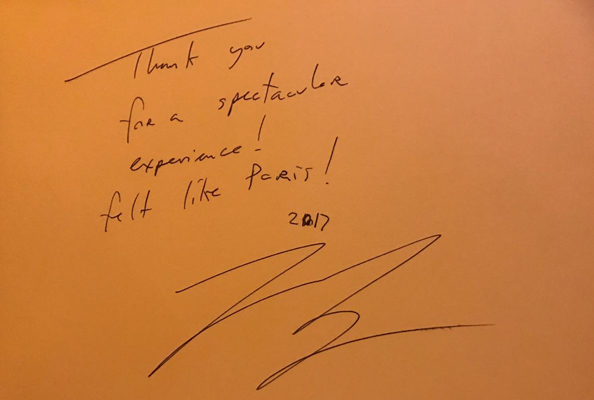 The French eatery shared an image of DiCaprio’s message in their guestbook, with the actor scrawling: “Thank you for a spectacular experience! Felt like Paris!”

The restaurant revealed that the star, who reportedly stayed at The One & Only hotel while in Dubai, tucked into the bottomless Toblerone chocolate mousse, according to onlookers.