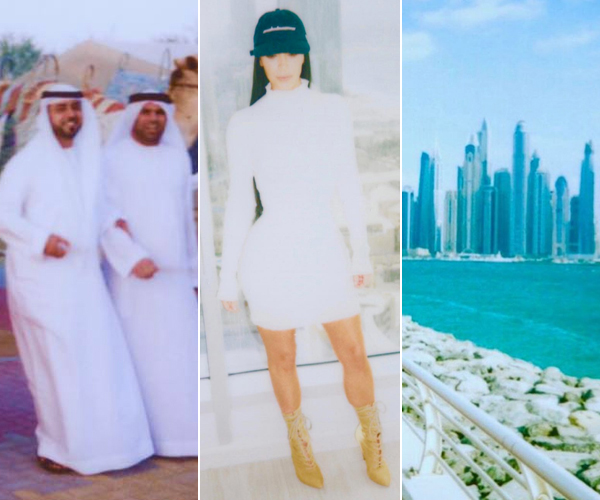 Plus, the star revealed the Dubai clinic that helped her beat a bout of psoriasis during her trip.

When it comes to holiday snaps, they’re not the sharpest.

But despite Kim Kardashian’s newfound love of a grainy blurred filter, you can still get a pretty good look at what the star got up to during her recent visit to Dubai.

The 36-year-old was in the emirate for a beauty masterclass with her long-time makeup artist Mario Dedivanovic, which took place at The Music Hall, Zabeel Saray on Palm Jumeirah earlier this month.

🙏🏻 At @TheMasterClass working on the lids and answering questions on how our signature looks came about and how they evolve. Stay tuned to find out where Kim and I will be headed to next for #TheMasterClass (soon) ❤ #MakeupByMario #KimKardashian

And the star, who’s kept fairly quiet on social media since being horrifically robbed at gunpoint last year, has only just updated her Instagram account with her travel pictures. While we know from her Snapchats that the businesswoman enjoyed a lavish dinner at Atlantis, The Palm, a dune buggy ride, and even some mall time, her newest snaps offer an artier behind-the-scenes glimpse at her sightseeing.

The mum-of-two was treated to what looks like a traditional dance performance, and also took in Dubai’s impressive skyline during a stroll along the Palm Jumeirah.

Read:
Kim Kardashian Preps For Her Dubai Visit As Arrests Are Made Over Paris Robbery
This Is How Much Kim Kardashian’s Beauty Regime Will Cost You In Dubai

The star also documented her aforementioned dune buggy ride with this very meme-able gif, which looks like a shot from a music video rather than a sightseeing tour.

For all of the pics & gifs from my Dubai trip go to my app or KimKardashianWest.com

Kardashian later gave a shout-out to Dubai clinic CosmeSurge, which she said helped her tackle a bout of psoriasis, an autoimmune disease that can cause dry, itchy skin.

The condition can be triggered by stress, something Kardashian would naturally have experienced during her traumatic last few months (along with admitted jetlag).

Thank you Dubai for the jet lag 💋

The star was tied up by five armed men who stole around US$10 million of jewellery in Paris in October last year, and subsequently cancelled her Dubai beauty masterclass scheduled for that month.

French police have reportedly now charged 10 men over the incident this month.