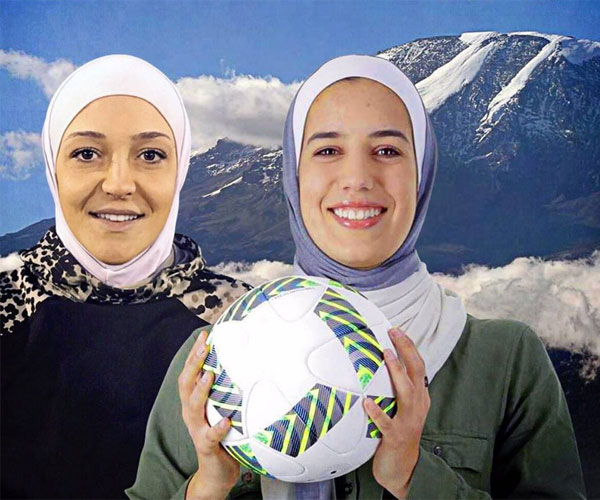 The footballers, who were congratulated by HRH Princess Haya, had a powerful message for women in sport.

A pair of Jordanian athletes have taken their sporting achievements quite literally to new heights.

Yasmeen Shabsough and Haneen Al-Khateeb were among a group of female footballers who climbed to the top of Mount Kilimanjaro in Tanzania to take part in the world’s highest altitude football game.

The record-breaking match took place 5785 metres up Africa’s highest mountain over the weekend, with teams made up of athletes from 20 countries.

On 24 June 2017 we played a record breaking football match at the top of Mt Kilimanjaro to call for “Equal Playing Field” for women in Sport. We are so proud! This is only the beginning!!! #equality #equalplayingfield #playlikeagirl #mymountain #footballforpeace @footballforpeaceglobal

A post shared by Equal Playing Field ⚽️ (@equalplayingfieldinitiative) on Jun 25, 2017 at 9:48am PDT

Organised by the Equal Playing Field Initiative, the aim of the challenge was to highlight the need for gender equality in sport.

Read more:
Muslim Women Will Soon Be Able To Wear The Hijab While Playing Basketball
Nike’s New Campaign Has A Powerful Message For Women In The Middle East

Al-Khateeb, 22, started playing football with the neighbourhood boys at the age of 9. She went on to be selected for the U-17 national team, and in 2010, represented Jordan at the World Championships.

“Football hasn’t always been so popular in Jordan. It’s grown a lot though it’s not yet equal to men’s football,” she told Equal Playing Field.

“I only ask to be respected in whatever sport I decide to take up, regardless of my gender.”

Shabsough has also represented her country in the sport. Like Al-Khateeb, the 22-year-old spoke of the challenges faced by female footballers in Jordan.

“I remember one time when I was heading to a game, and a woman stopped me in the street, looked me in the face and said ‘I hate girls who play football’. I was shocked  –  but at the same time I wanted to show her that people like her will only be a motivation for me to do my best,” she told Equal Playing Field.

“Climbing Kilimanjaro will help me to encourage many girls and young women in my country to change their view about themselves and other women. I want to promote football and encourage every young woman to take up this beautiful game.”

The pair have found a fan in fellow Jordanian, HRH Princess Haya – who took to Instagram to congratulate the athletes on their incredible feat.

Princess Haya’s brother, HRH Prince Ali bin Al Hussein, is president of the Jordan Football Association, and has also been a big supporter of women’s football.

He played a big part in convincing FIFA to allow female football players to wear the hijab during matches.