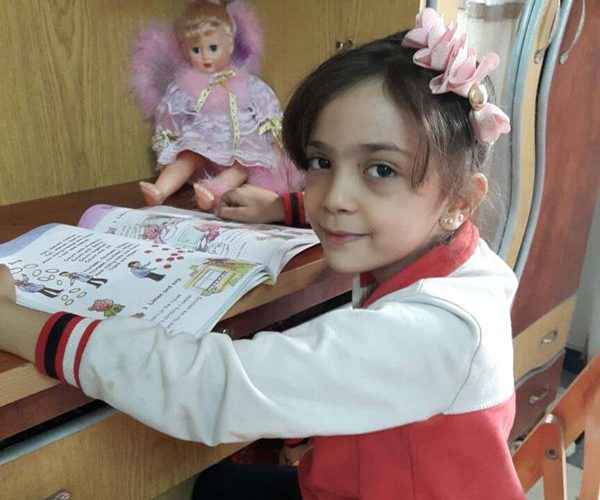 JK Rowling has brought magic to millions around the world – but one little girl just got an extra-special delivery from the British author.

Bana al-Abed is a seven-year-old living in the war-torn city of Aleppo, in Syria, and has been courageously live-tweeting her experiences amid the bloodshed in recent months.

No one knows my life is difficult when I smile. – Bana #Aleppo pic.twitter.com/1ZsaMkqHTD

“I’m reading to forget the war,” the child (whose account is managed by her mother) heartbreakingly captioned her first image on the site. Her first Tweet? “I need peace.”

Yet despite the bombings and battles that surround her hometown, Bana has tried to maintain a normal life, turning to books and colouring in to distract herself from the war.

Read:
Sheikh Hamdan Makes These Schoolkids’ Day As He Stops In For Playtime
Meet The Young Muslims Fighting Back Against Islamophobia In Stunning Photos
The UAE Pledges To Open Its Doors To 15,000 Syrian Refugees
Lindsay Lohan Attributes Her New Accent To Learning Arabic
What Malala Yousafzai Taught Us During Her Dubai Visit

And now, she has the world’s most popular series to keep her company.

Bana – who has 93,000 followers – revealed her delight this week after JK Rowling sent the family a set of e-books about a boy finding his feet in the wizarding world.

The girl intially reached out to the author on Twitter after watching the Harry Potter films, saying she’d love to read the books but she couldn’t get her hands on them in Syria – and Rowling was only too happy to oblige.

She then organised for the girl to receive the series via e-book (after a little help from fellow Twitter users showing Bana’s mum how to set up an app on her phone).

My friend @jk_rowling how are you? Thank you for the book, love you from #Aleppo. – Bana pic.twitter.com/c84b4Zux0G

Shortly after receiving the gift, Bana shared a sweet image of herself holding a handwritten note, reading: “Thank you my friend JK Rowling for the books.”

The 51-year-old author touchingly replied within minutes, tweeting “Love you too, Bana! Thinking of you, keep safe.”

Love you too, Bana! Thinking of you, keep safe #Aleppo https://t.co/1l5SJPStEm

Bana, who lives with her two brothers, hopes her social media endeavours will raise awareness of the situation for many in Aleppo, and encourage aid.

Until then, she’ll have the wise words of Professor Dumbledore for comfort.