The female cast of Netflix’s Jinn on Empowerment, Expectations and Experiences 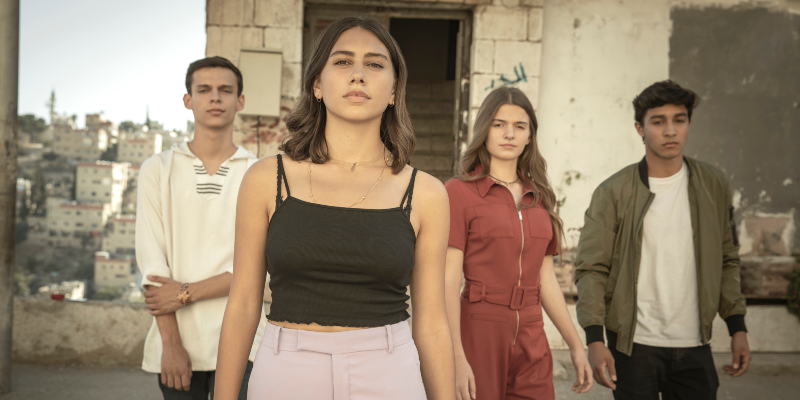 We still remember our excitement last year when Netflix announced that it would be producing its first Arabic original series, Jinn. Later on, the streaming service revealed that its first Middle Eastern show would be a fantasy one, a genre left relatively undiscovered in the region.

Towards the end of April, Netflix released the first global teaser for Jinn, along with the release date for the young adult fantasy drama. So mark your calendars for June 13, as we are set to follow a group of teenagers in Amman, Jordan whose lives are disrupted when a spiritual figure appears in front of them in the ancient city of Petra. In the six-episode series, we will follow the teens as they try to stop the Jinn that they have unknowingly unleash from destroying the world.

This series will be a great milestone for the region, as it is set in modern Amman and ancient Petra. The upcoming series is filmed entirely on location in Jordan with a cast of regional actors. Even though the show’s premise is supernatural, it will still follow the day-to-day struggles, friendships and romances that the teenage cast go through. Jinn will introduce us to a cast of up-and-coming talent including Salma Malhas, Hamzeh Okab, Sultan Alkhail and Aysha Shahaltough.

Prior to the release of the show, we got the chance to meet and interview two of the show’s budding actresses: Salma Malhas, who plays the role of Mira, and Aysha Shahaltough, who portray’s Vera. 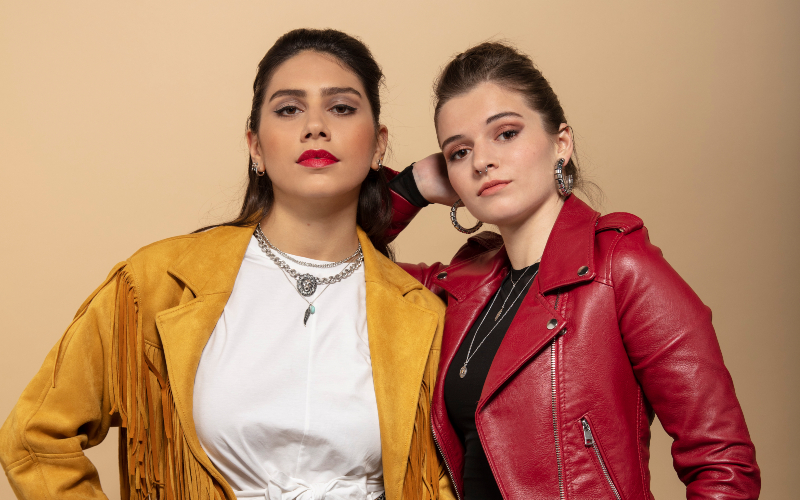 How did you hear about the role? How did you get cast? What was the audition process like?

Salma Malhas: I heard of the role from my theatre teacher at school. They were holding auditions at different schools in Jordan and they held one in my school, so I went. I completely thought that I wasn’t going to get it – I was 100 per cent sure, but then I got a callback. It went on and on for two months, and we had so many different callbacks and trials. In the beginning they gave me Mira, Vera and Laila.

It was very long, but I actually grew a lot from the audition process. I understood a lot of different acting techniques.

Aysha Shahaltough: For me, a friend of mine told me about the auditions and I had to send a video. So, I sent one and I wanted it really bad, I mean we are talking Netflix and they are doing an Arabic series. I remember throughout the auditions I reminded myself not to get too attached to the role, cause anyone could get.

How hard was it to keep the show a secret? Are you excited for it to finally come out?

Aysha: I only told a few people, because throughout the auditioning process the role wasn’t mine yet and I didn’t want people to get too excited. I am actually worried about telling people about the role, it is a surprise.

Salma: For some reason everyone at my school knows, like it is not a secret anymore. Three of the cast members are from my school.

Jinn is Netflix’s first original Arabic show, what is it like being part of something this monumental?

Aysha: It is overwhelming. It is exciting and scary.

Salma: It is scary, because you don’t know what to expect. There is nothing to compare the show to, especially from the region. You can’t say: “I expect it to be this way.” We don’t really know how it is going to turn out, we don’t really know the reaction.

Aysha: I remember being so nervous the day before our first shooting day. Like, okay we are doing this, there is no going back from this. I thought that I had things planned in my life, and now this might change everything.

How did you overcome the pressure that comes with being part of Netflix’s first Arabic original series?

Salma: People from the region are waiting for something different, especially people our age. When I was growing up, I needed someone to look up to, someone I can relate to on TV. Like she is going through the same thing I went through, she lives where I live. 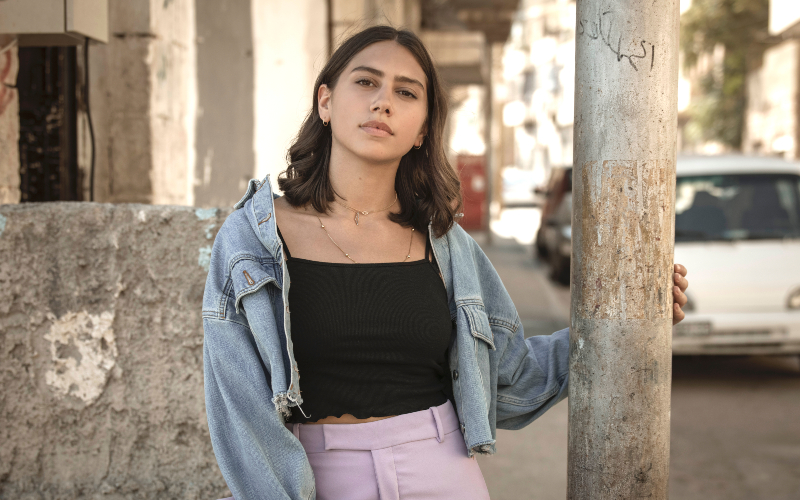 Did either of you want to become an actor before this show?

Aysha: This might sound clichéd, but ever since I was a little girl, I believed that I was going to act one day and that I am going to be famous.

Salma: I think it was always in the back of my mind. I was always in productions and in theatre. In my school, I am one of the only two students in theatre, because it is so uncommon. I was always so afraid to pursue it and what people would say about me. People would tell me it is not practical, like you can’t do it.

I was told that there was a level of improvising during production. What was that like?

Aysha: I remember we had like an entire scene, where the script kept changing until the day we had to shoot it, and we didn’t even use the script.

Salma: Yeah, I had a scene with Yassin, where in the moment the script completely changed because of our three-week workshop, which showed us the chemistry between us and how we react to each other.

What effect do you hope the show will have on the region?

Aysha: I hope it opens doors for people our age and younger in this industry. I hope it helps it grow.

Salma: I hope young people can actually do what they love. We all came from regular schools in Amman, and some of us didn’t even think of acting.

Your character Vera blurs the line between good and bad. What was it like bringing her to life?

Aysha: There is no good and there is no bad, there is everything in between and that is Vera. She believed in things that seem good to her and she pursued them, even if she had to do things that others perceived as bad. For her it is about reaching her goal.

As a person, it opened my eyes to being more rational. She is very impulsive and that makes some of her behaviour sometimes irrational and I wouldn’t want to be irrational. What did you learn about yourself through the shooting process?

Salma: I have gained a lot of confidence from this experience. I was very passive in the beginning, but this showed me that you have to be more goal-oriented and do what you love.

What social issues if any were you glad that the show touched upon?

Salma: The show is trying to move away from any of the regular issues that we have seen on TV. I like how the female characters are really strong. It shows how in this group of friends and community, the women are as strong as the men.

Aysha: When you watch the show, you will realise that all the female characters make their decisions based on what they want and that is how it should be.

You two play strong female characters, did you have any input on how they should be portrayed? Was it important to you that they are shown as strong girls?

Aysha: I wanted my character to be really confident and stand up for herself.

What similarities are there between you and your characters?

Aysha: There are lots of similarities, because when we auditioned, what we noticed was that they were trying to find the character within the actor’s personality.

Salma: Even at the beginning, during the first auditions, Mir-Jean Bou Chaaya (director) was asking me questions, and told me to answer as Salma but he would be referring to me as Mira, so he was trying to see the Mira inside of me. 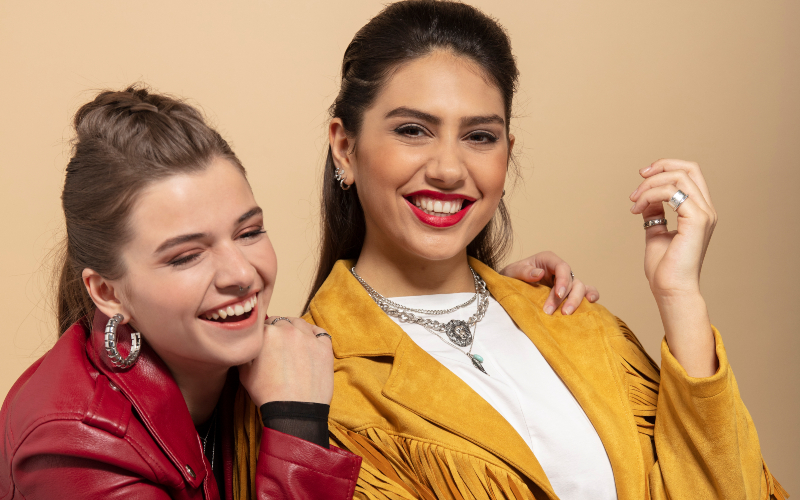 What message is Jinn trying to convey to audience? Why should people watch it?

Salma: I hope people watch it and enjoy it, because it is going to be something different from what we usually see coming out of the region.

Aysha: I wish I could see this with a fresh eye, like someone who is watching the show for the first time. I want to see how people will react to it, and we hope that they love it.

I was told that Method acting played a big role during filming, what was that like? Do you feel it helped especially that most of you are fresh faces?

Salma: We used several techniques, and some of them were method acting. I think the main method technique was that we lived in our characters shoes.

Aysha: It gave the character a lot of layers, because we were using our own personality at times. So, the characters are true and authentic.

From the preview of the show that I got, I felt like the show was a bit more risqué than what this region is used to, how do you feel people would react to that?

Aysha: I feel like most people try to hide these things, they don’t want to talk about them. They are not supposed to happen, but if you want to give something that is authentic and true, then you have to show what actually happens.

Through Netflix, Jinn will reach an international audience. Do you think that the show will help change the somewhat Orientalist image that the world has of the Middle East?

Salma: Something that we see a lot is the wrong ideology of Arabs around the world and the stereotypes. I have a Colombian friend, whose mother told me “You’re different than an Arab” and I was like, “Have you ever even met an Arab?” I am not different, and people need to see that we are just like everyone else. 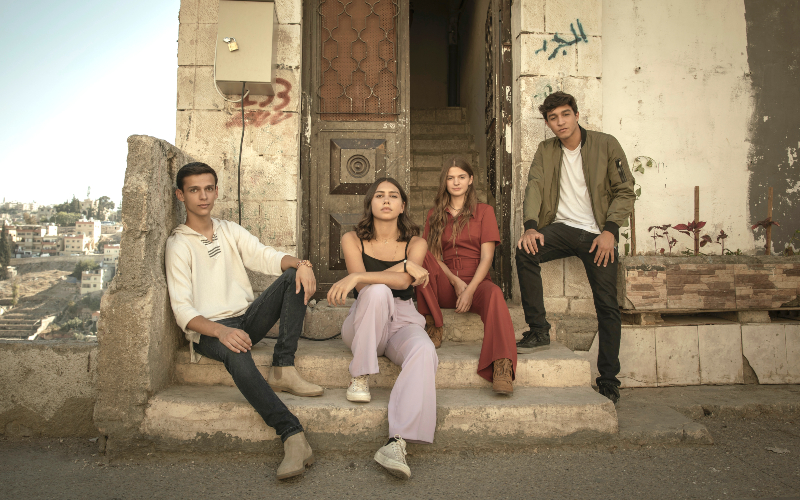 Make sure to watch the show today!