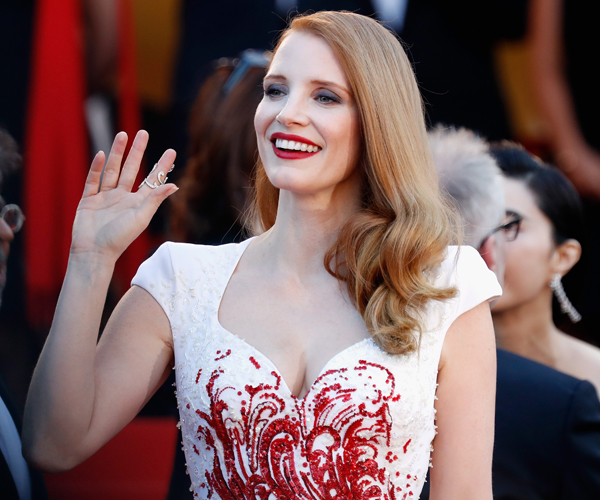 It was the last night of the annual Cannes Film Festival, so jury member Jessica Chastain was in need of a perfect ending when it came to rounding out her red carpet wardrobe.

The Lebanese label dressed the star in a customised haute couture gown inspired by its Spring/Summer 2017 collection, featuring an elaborate swirl of scarlet beading, structured cap sleeves and sweetheart neckline.

Read:
These Celebrities Have The Midas Touch Thanks To One Arab Designer
Aishwarya Rai Just Had A Total Cinderella Moment Thanks To This Dubai Designer

The crepe floor-sweeper also added extra wow-factor with some artful draping and a cut-out back.

With the Old Hollywood waves, classic red lip, and ornate earrings, this has got to be up there with Chastain’s top 10 red-carpet looks.

The Beirut-born brand also dressed Victoria’s Secret model Izabel Goulart towards the end of the festival, decking her out in a firework-emblazoned golden gown.

The way the beading catches the light, without looking OTT, is a particular highlight.

Read:
These Supers Stunned At amFAR (With A Little Help From Arab Designers)
Is This Sonam Kapoor’s Best-Ever Red Carpet Look? Quite Possibly…

With its psychedelic metallic pattern, high neck and hemline dripping in feathers, this head-turning number really stood out among a sea of simple block colours.

With Cannes now done for another year, we’re sad to wave goodbye to a daily dose of envy-inducing gowns.

However we’ll leave you with the best of the rest of the festival’s final looks for now. Until next year, ladies!