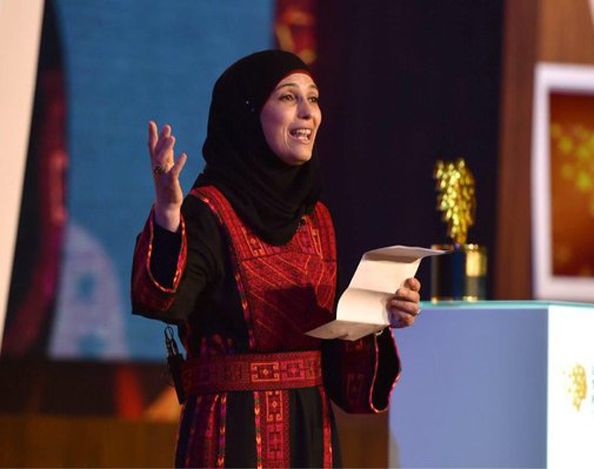 “I am proud to be a Palestinian female teacher standing on this stage,” said Al Hroub after H.H. Sheikh Mohammed bin Rashid, Vice President of the UAE and Ruler of Dubai, gave her the award for her inspirational and important work as a teacher.

Pope Francis sent a video message to Al Hroub on the night to congratulate her for her work. 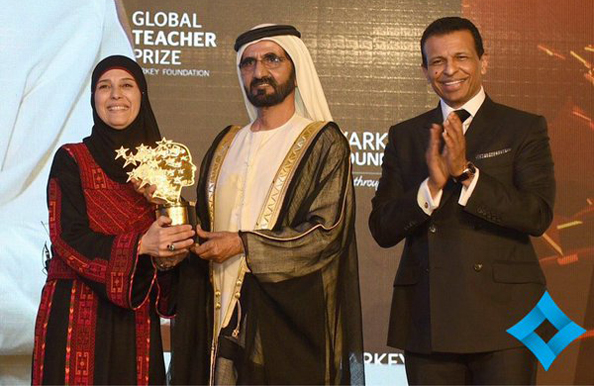 Al Hroub grew up in the refugee camp Bethlehem and is a teacher in a primary school in the West Bank city of al-Bireh, just outside of Ramallah. She got into teaching after her sons witnessed a shooting and were traumatised – Al Hroub found the support they got from their teachers lacking, and so she decided to change the education culture in her homeland from within.

She has vowed to use her prize money to create scholarships for students who show promise and want to one day be a teacher.

Hanan’s slogan is “no to violence,” and she’s written a book called We Play and Learn that is focused on developing trusting, respectful and positive environments in the classrooms for her students, even though they are often surrounded by tense situations and violence.

According to the Global Teacher Prize site, “Her approach has led to a decline in violent behaviour in schools where this is usually a frequent occurrence; she has inspired her colleagues to review the way they teach, their classroom management strategies and the sanctions they use.”

Salma Hayek and Matthew McConaughey were in the crowd to cheer on Al Hroub, while Bill Gates, Vice President of the United States Joseph Biden, Ban Ki-moon, Secretary-General of the United Nations and US actor Kevin Spacey all took the time to congratulate her for her win.

As did Prince William, the Duke of Cambridge, who said: “I would like to congratulate Hanan Al Hroub. Your work is a great inspiration and an example of the work of teachers around the world.”

Congratulations Hanan, you are a true inspiration!