In Pictures: The Coolest New Display At Dubai Miracle Garden 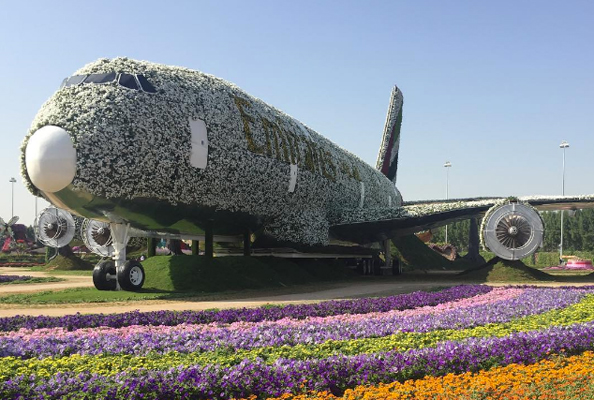 Now that the mercury’s dropped, Dubai’s greenery is in full flourish.

And the city’s most impressive blossom this year is surely Dubai Miracle Garden’s latest installation.

Forget a bud you can hold in the palm of your hand, oh no – instead we’re talking about a life-size aircraft.

That’s right, there’s currently an enormous A380 taking roots in the colourful park, made up of a whopping 500,000 fresh flowers and plants.

The display officially opened yesterday, and visitors are flocking to what is now the world’s largest floral installation (hey, Dubai never does things by halves).

Read:
There Were So Many Celebrities In Town For The F1 This Weekend
14 Backstage Secrets From Les Misérables At Dubai Opera
Queen Rania’s Australian Tour Wardrobe Is Seriously Sensational
Adrenaline Junkies, This New Adventure In RAK Is One For You…

The plane, which was built in collaboration with Emirates Airline, will have a stem count of 5 million flowers when in full bloom, and will weigh a staggering 100 tonnes (70 tonnes of which are the blossoms themselves).

(However the take-off weight of an actual A380 is 575 tonnes so it pales in comparison).

The entire project is homegrown, with all the plane’s flowers being grown at the Dubai Miracle Garden nurseries over four months. And the steel foundations? Sustainble, but of course.

Want to copy it at home? Well, it’d be incredibly ambitious to say the least, but you’d be needing petunias, coleuses, marigolds, snapdragons, violas, geraniums and gaillardias.

In fact, it took 200 crew members 180 days of 10-hour shifts to build the bucolic sculpture that measures more than 70 metres in length.

So massive is it, that the display takes over about 10 per cent of the garden’s floor space, and can be viewed from a specially constructed platform.

So, here are some of our favourite social media snaps of the display in real life:

And if you need any more reasons to visit the world’s largest natural flower garden, here are a few:

I will let love find me this time.. 🙈 #charotlungs 😂