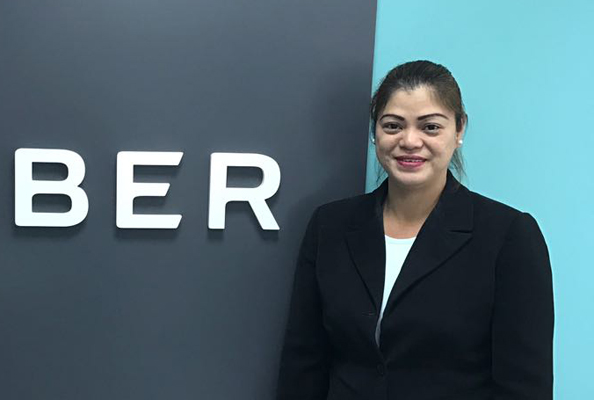 And hopefully there are more to come too…

Considering every survey we’ve read about Dubai driving says women are the safer motorists, we’re surprised we never see more of them on the roads.

However Uber have just taken a step towards changing that.

The e-hail limo service has just added the first female driver to their UAE fleet, and she also claims the title of the first RTA-licensed limo driver in Dubai’s ridesharing industry.

Read:
A New Fleet Of Lady-Driven Limos Is Coming To Dubai
The Five Must-Have Car Gadgets For Women

Fritzie Castro is originally from the Philippines, and she took the wheel at Uber for the first time yesterday.

“I love being a driver because of all the people you meet along the way,” she said, revealing that she’s been a professional driver in the UAE for around seven years.

“I hope this will encourage more of my female colleagues to join.”

Read:
Dubai Women Are The Better Drivers… By A Mile
Saudi Prince Says It’s Time To Let Women To Drive

This isn’t the only female-focused option either – a Ladies Limo service is set to launch via the Careem app in the very near future.

The Roads and Transport Authority’s Dubai Taxi Corporation is behind the service, which will see a fleet of female-driven vehicles available for booking.

The service, which is called Amira (Arabic for princess), will only put “highly experienced female chauffeurs” behind the wheel – but there’s no confirmed date as to when the service will start.

“The service will be appealing to VIP ladies in quest for privacy and comfort aboard deluxe transit means,” said Dr Yousef Al Ali, CEO of DTC.