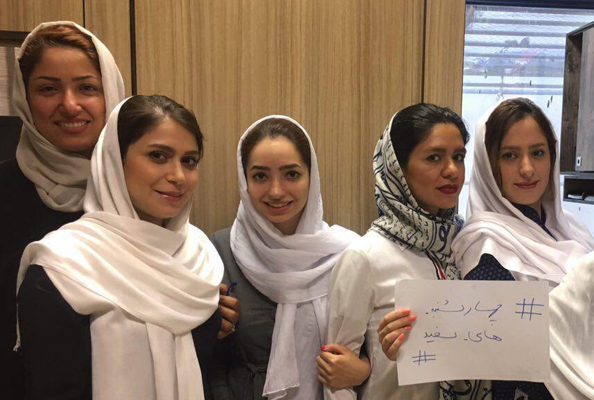 Have you noticed the hashtag trending on Wednesdays?

It’s a peaceful protest, but one that has been gaining traction on social media.

In a bid to campaign against Iran’s compulsory hijab law, women from the Middle Eastern nation have started to wear white headscarves on a weekly basis.

The online protest, which uses the hashtag #whitewednesdays, invites women to demonstrate their opposition to the enforced dress code.

Read:
MuslimGirl’s Founder Was Forced To Remove Her Hijab In France
This Hijabi Style Icon Is The Star Of Dolce & Gabbana’s New Campaign

It’s the brainchild of My Stealthy Freedom, a social movement started by journalist Masih Alinejad that promotes the right to freedom of choice.

Women in Iran have been legally bound to cover their hair in public since the Islamic Revolution of 1979.

It is a rule enforced by the country’s Morality Police, who fine or even jail women found to be breaching the law.

Even a “bad hijab”, where women wearing a headscarf have allowed a little hair to show above their forehead, face repercussions.

Thanks to the supporters of #WhiteWednesdays today we will support Iranian women on their protest against forced hijab#چهارشنبه_های_سفید pic.twitter.com/2udwI54Sy6

In other Middle Eastern countries, such as the UAE, the hijab is wore with pride by Muslim women but they face no legal obligations should they choose not to wear it.

While My Stealthy Freedom encourages women to share hijab-less images on social media in protest, the latest campaign allows them to take part without breaking the law.

“We started our #WhiteWednesdays campaign to demand the right to choose what we want to wear,” a post on the My Stealthy Freedom Facebook page stated last week.

“This is undoubtedly the first step towards acquiring more rights. By wearing white clothes on Wednesdays, we are demanding our most basic human right: the right to wear what we want.”

The campaign has attracted scores of submissions, with women of every age sharing selfies on social media – many supported by their friends and families.

Alinejad, who is now based in the US, has emphasised that the campaign is not designed to protest the hijab in general, just the mandatory wearing of one.

Read:
10 Of The Best Hijab Cosplay Outfits We’ve Ever Seen
Hurrah! You Can Finally Use A Hijab Emoji On Twitter

“My goal is just empowering women and giving them a voice. If the government and the rest of the world hear the voice of these brave women then they have to recognise them,” the activist told Reuters, adding that she chose white as it’s the colour of peace.

She hopes those that oppose the dress code can now spot each other in public and create a sense of unity.

Since launching in 2014, My Stealthy Freedom has received more than 3,000 photos and videos showing women without their heads covered.

The campaign also started a #meninhijab hashtag last year, inviting men to don the traditional covering in a display of solidarity with their wives, sisters, aunties and mothers.