The Truth Behind The Famous Hollywood Sign | Los Angeles Landmark 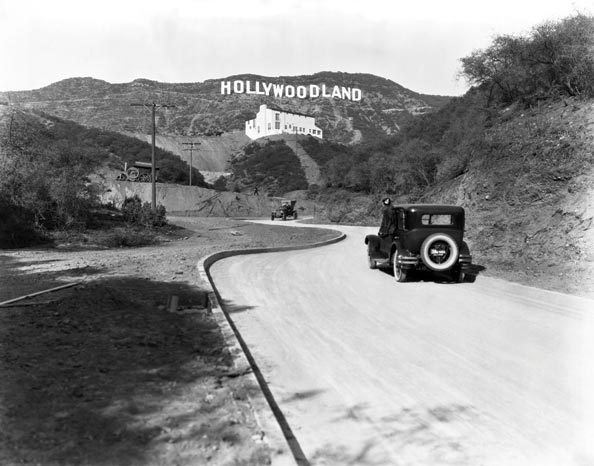 With the Golden Globes only just finished and with the Oscar nominations just announced, it seems all eyes are on Los Angeles’ A-list scene. But while everyone is gossiping about who won what, who wore who and who got recognition, one icon remains silent – the Hollywood sign, Tinseltown’s biggest celebrity. Here, Emirates Woman reveals the secrets behind the landmark.

Do you know the way to the Hollywood sign? For countless visitors to Los Angeles, those nine words are repeated time and again as they explore the city. It seems everyone, at any age, wants to get a good look at the most famous sign of all time. But, believe it or not, this international icon wasn’t built to promote the entertainment capital of the world, but to sell homes in the canyon below 90 years ago.

Hollywoodland, as it was original called, was a new development that promised potential clients a place “to live where California means the most”. It was planned to be one of the first hillside themed housing developments in the county with the idea to bringing a hint of European hillside towns to southern California. Only four distinct styles of homes were allowed: English Tudor, French Normandy, Mediterranean and Spanish. Once a resident bought a lot, not only were their house plans subject to approval, so were their landscaping designs.

To promote this new development, the builders needed an advertising gimmick, and they came up with a big one. A gigantic sign announcing the name of the new development — HOLLYWOODLAND — was constructed just below the peak of what is now known as Mount Lee. Each letter in this massive project would be 45ft tall and the entire sign would have a width of nearly 450ft. It gets even better: to ensure that no one down below would ever miss the gigantic sign, it was lit during the night. Over 4,000 light bulbs were placed on the sign outlining each letter. Every night, ‘HOLLY’ would first light up followed by ‘WOOD’ and then ‘LAND’. There was even a gigantic round beacon under the letters, which also lit up to draw more attention to the new development. To make sure that the sign was always illuminated and never vandalised, a German immigrant, Albert Kothe, was hired to provide maintenance services for the sign. He didn’t have a long commute to work: for a time, he lived in a little cabin right behind one of the Ls.

The sign was meant to be a promotional gimmick to last a few years while the home lots below were sold. It was constructed out of three nine-sheet metal panels painted white and attached to a series of telephone poles. Add in some wires to light all the bulbs and a few crossbeams to secure the panels and that was about it. Immediately the sign began to draw attention and people were clamouring to see it up close, something that the original Hollywoodland neighbours weren’t so excited about. They didn’t like the traffic jams of tourists trying to view the sign.

Very quickly, the sign came to represent the entertainment business bustling on the busy streets of Los Angeles down below. It was the golden age of Hollywood, and many a young hopeful actor or actress came to Los Angeles with stars in their eyes and dreams of becoming the next matinee idol. One of these dreamers was Millicent “Peg” Entwhistle, an acclaimed stage actress from New York. Her prospects were as bright as the sign itself: upon arriving in LA, she was cast in a play opposite Humphrey Bogart. Legendary actress Bette Davis is quoted as saying that Ms Entwhistle was her inspiration for becoming an actress, and, most importantly, Peg’s dreams of stardom were coming true – she was cast in an RKO Picture called Thirteen Women. Then things took a turn for the worse. Although Peg’s performance was critically acclaimed, the film was a flop and RKO didn’t pick up her option, a kiss of death for a young actress’ career. Her stage roles were drying up as well. Distraught over these disappointments in her professional life and also still reeling over her recent divorce (she found out her ex-husband Robert Keith never told her he had a son from a prior marriage – he became the actor Brian Keith), Peg cemented her place in Hollywood history on September 18, 1932. She climbed to the top of the H, and plunged to her death. She will always be remembered as the ‘Hollywood Sign’ girl. There are many who say that her ghost still haunts the sign to this day! 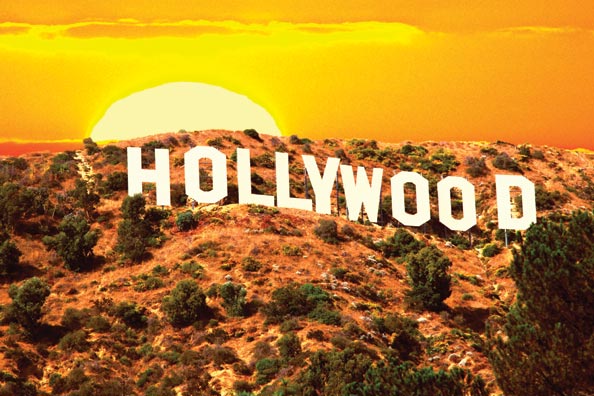 Fifteen years after the sign was built, poor Mr Kothe was out of a job – the developers decided to stop maintenance on the Hollywoodland sign and it quickly fell into disrepair. All of the 4,000 lights were stolen and bits and bits of the letters themselves began to crumble or blow away. When in 1949 a wind gust blew over the H, the city had to spring into action. Recognising that the sign symbolised the entire entertainment industry, the city would take over the responsibility of the sign, but a compromise of sorts was reached: “LAND” would be removed and the sign would no longer be lit. The new abbreviated sign was saved… for the time being.

Fast forward a few years, even with the city now overseeing its maintenance, the LA icon had seen better days. By the 1970s, it was a mess, many of the letters had toppled over or crumbled altogether. (See a great flyover scene in the film Argo). A major decision was made: the sign was beyond a major repair – it had to be entirely replaced. Enter Hugh Hefner, founder and publisher of Playboy magazine. In conjunction with the Hollywood Chamber of Commerce, Hefner hosted a series of fundraisers at the Playboy mansion where generous patrons donated dollars to replace the sign. In return each “adopted” an individual letter. Rock star Alice Cooper was one the of the most popular patrons – his gift to save the sign was in memory of Groucho Marx.

The original sign was completely dismantled in the fall of 1978 and an exact replica was erected in its place. The same sign and billboard company was commissioned for the job. The second time around, the sign was built to last. Massive concrete foundations were sunk deep into the mountain and a steel framework was created to support the letters.  The original letter panels were also upgraded to baked enamel sheet metal. This time, instead of dragging the materials up the steep hill to create the sign, they were flown in by helicopter and meticulously dropped into place. Upon its completion, the new landmark stood 45ft high, was 450ft in length and weighed a total of 480,000lbs. The new sign was officially unveiled on November 14, 1978, on a nationally televised special.

Bill Miltenberger works for Bikes And Hikes, a modern eco-friendly tour company that organises fun, informative and active tours across the different landmarks of LA. For more information, visit bikeshikes.com

• The sign has been famously altered throughout the years. When the Pope came to LA, the sign was switched to ’Holywood.’

• A few years ago, some land to the west of the H was up for sale and the city couldn’t afford to purchase it. The ‘Save the Peak‘ movement was born with Hugh Hefner coming in to help raise the funds necessary to buy the land around the sign. In the meantime, a Danish architecture firm, Bay Arch, developed plans to transform the sign into a hotel – think infinity pools on the H!

• Since the sign went dark in 1949 it has been lit twice. One time when Los Angeles hosted the Olympics in 1984; the other to celebrate the Millennium, December 31, 1999.

• Two Hollywood legends had plans to build massive homes there. Howard Hughes planned to build a castle in the sky for his fiancé at the time, dancing legend Ginger Rogers. Hollywood pioneer Max Sennett also planned to build a home above the sign with views of the entire LA basin.