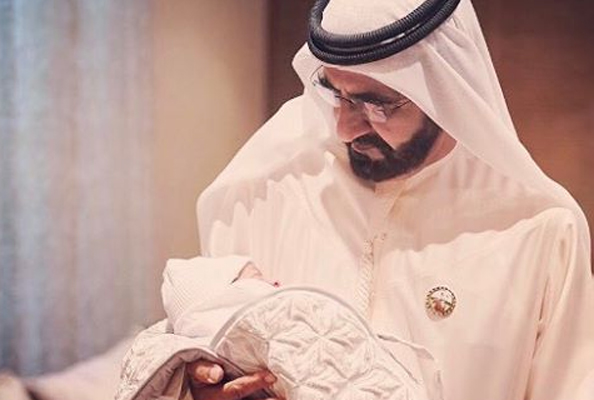 In an image sure to bring on plenty of warm, gooey feelings, HH Sheikh Mohammed bin Rashid Al Maktoum has met the newest addition to his growing family.

The Vice President and Prime Minister of the UAE and Ruler of Dubai welcomed a new grandchild courtesy of his daughter, Sheikha Manal bint Mohammed bin Rashid Al Maktoum, earlier this week.

The latest member of the family was born just after Mother’s Day, and has been named Rashid bin Mansoor.

And now the proud family patriarch has had his first cuddle with the new bundle of joy in his life.

The royal met his newest grandchild surrounded by the tot’s siblings, in a touching portrait shared on Instagram.

Read:
This Is Definitely Our Favourite Mother’s Day Photo Of The Week
‘These Women Raised Leaders’: Princess Haya Posts Tribute To UAE Mothers

The couple have four children together – two daughters and two sons – with the latest arrival making them a family of seven.

Members of the royal family congratulated the new parents across social media, with Sheikha Manal’s sisters among the first to send their well wishes.

Congratulations on your new baby boy sis @mmbinrashid welcome to the word baby Rashid bin Mansoor 💙💙💙 love you both!!

Congratulations to my sister @mmbinrashid on her new bundle of joy 👼 I love you sis 💙💙💙 Welcome to the world Rashid Bin Mansour 😭❤️ #Repost @latifa.mrm

The Crown Prince of Dubai and Chairman of Dubai Executive Council (and also proud uncle) gave the wide-eyed newborn a hold in the snap.

Sheikh Mohammed already has several grandchildren, and can often be pictured indulging in a little playtime.