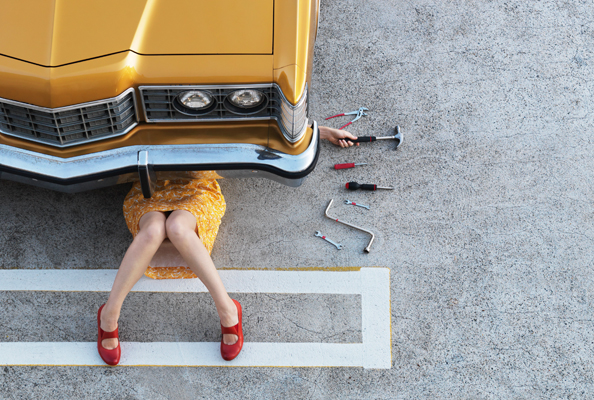 If you’ve ever apologised to your credit card before you even step foot in the mechanic’s shop, then we have some very good news for you.

Thanks to the launch of a new workshop, women in the UAE are now able to save on easy repairs by being taught how to maintain their vehicles themselves.

The classes are the brainchild of three Emirati women who want to save their fellow females from being ripped off, or stranded at the roadside when they could easily fix the problem by hand.

The first workshop – part of the trio’s “Mootary” campaign – took place last year with 25 participants, with another scheduled for January 21.

Read:
This Saudi Music Video About Women’s Rights Is Striking A Chord
Men In The UAE Are ‘Highly Supportive’ Of Women Working

“The idea behind Mootary [which means my car in English] is to make women able to do what they have been told they cannot do,” Rihab Awadh, one of the campaign’s co-founders, told The National.

“If they have a driving licence and drive their cars everyday they need to have the basic knowledge of cars.”

The workshops cover basic vehicle upkeep, including how to check water and oil levels, tyre treads, and what to do in an emergency.

“If women go to the garage by themselves, they could be cheated because of their lack of knowledge,” Awadh told the newspaper.

The workshops – sponsored by Emirates NBD – are limited, so email mootary.uae@gmail.com if you want to pick up some new tricks at the January 21 class (which will be held from 10am to 3pm atAl Nabooda Automobiles in Dubai).

The campaign’s co-founders are now hoping to open a garage completely staffed by women as their next project.

Fingers crossed it opens soon, because that’s one we’d definitely go to…