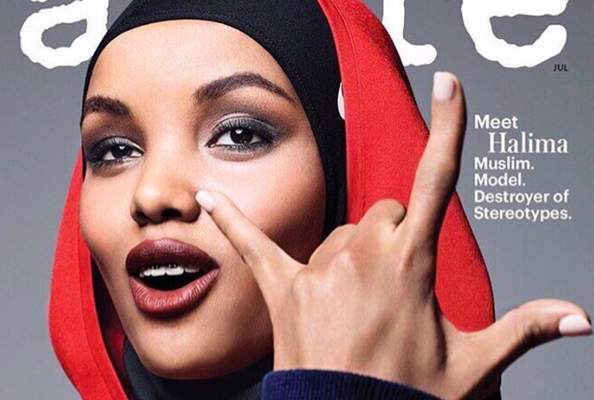 She’s been breaking records ever since she stepped into the spotlight just seven months ago – and now Halima Aden has another title to add to her ever-growing portfolio.

The 19-year-old Somali-American model, who rose to fame last year after competing in a beauty pageant wearing a burkini, has just become the first hijabi cover star for Allure.

The US beauty magazine snapped up Aden, who was born in a Kenyan refugee camp, for their July issue, proclaiming the teen a “Muslim, model, destroyer of stereotypes” on the cover.

Read:
Halima Aden: ‘My Hijab Is A Choice’
Halima Aden Just Made Her Milan Debut Alongside Some Fashion Superstars

Aden has most certainly made her mark on the industry this year, walking for Kanye West and Alberta Ferretti in fashion weeks, as well as landing a contract with agency IMG Models.

In her latest interview, the teen donned Nike’s first sports hijab and opened up about the impact of her headscarf on her career.

“Society puts so much pressure on girls to look a certain way,” she told Allure.

The model revealed she began wearing her hijab aged 8, and opened up in a previous interview about how wearing it was “a choice”.

“I don’t need people to feel afraid when people see my hijab. I don’t need them to think I’m oppressed,” she told i-D magazine. “This is a choice, just like any other wardrobe that I pick. It’s no different than choosing shoes or a jacket.