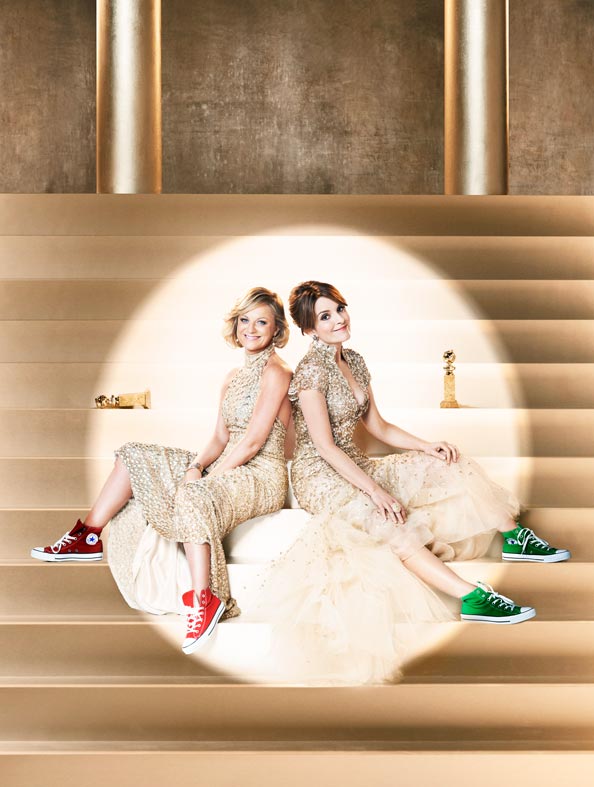 The hottest stars of Tinseltown gathered at the Beverly Hilton Hotel for the 71st Golden Globes, hosted, for the third time, by comedians Tina Fey and Amy Poehler. And as predicted the two drew gasps of awe and anger with their most controversial routine to date. Cate Blanchett, Jennifer Lawrence and Breaking Bad were among the big winners. Find out who else won, who lucked out and who was at the receiving end of the jokes and what happened behind the scenes.

Producer and star of 30 Rock, Tina Fey, and Parks And Recreation actress Amy Poehler started the night with fun but tame jokes. However, as the evening progressed, so did their humour with the Wolf Of Wall Street actor Leonardo DiCaprio being the butt of one incredibly crude joke that we can’t print – let’s just say it was about his penchant for model girlfriends.

Hollywood actors Bradley Cooper and Leonardo DiCaprio with their mums.

George Clooney’s love life was also mocked with the comedians suggesting the film Gravity was about his preference to go to space and die rather than spend the rest of his life with a woman of his own age.

Once again, Taylor Swift was a target. Last year, after being teased by Tina and Amy, the singer told Vanity Fair: “There’s a special place in hell for women who don’t help other women.” This year, when host Amy won the award for Best Actress in a TV Series, Comedy for Parks And Recreation she received a hug from her co-host who quipped, with a obvious dig to Taylor: ‘Congratulations, Amy Poehler. I love you and there’s a special place in hell for you.”

However, it wasn’t just the celebrities that were at the receiving end. At one point Amy came to the stage dressed up as Tina’s son and demanded to know who the real daddy was, even hugging movie mogul Harvey Weinstein and asking if it was him.

Behind the scenes Hollywood heavyweights and besties Meryl Streep and Emma Thompson joked about the industry’s demand for skinny celebs with Emma sucking in her belly while striking a pose and declaring, “Slim,” much to Meryl’s delight.

In fact, the demand for skinny-minnies in showbiz was ridiculed by Tina and Amy, who compared Matthew McConaughey’s shocking 45lb weight loss for The Dallas Buyers Club, for which he picked up the gong for Best Actor, as “what actresses call preparing for a movie” – a statement that left most of the A-list females in stiches.

Apparently, though, it seems everyone went a little hungry during the famous awards dinner ceremony with waiters removing the meals before the curtain rose, which meant getting there fashionably late saw stars left without. Anyone feeling peckish, however, could get some sandwiches or cold cut in the adjacent room but only during the commercial breaks. That said, Veep star Julia Louis-Dreyfus managed to sneak in an overloaded hotdog.

Meanwhile, Jonah Hill and Bradley Cooper proved their bromance was alive and well with the pair hugging and declaring their love for each other during an advert break before Bradley introduced the Superbad actor to his date – his mum, Gloria.  Emma Thompson also made it a family affair, bringing her daughter as her plus one.

The biggest drama of the night was the burst sewage pipes, which meant the red carpet was flooded before the ceremony. Ryan Seacrest tweeted a picture of the disaster, which was cleaned up quickly, commenting: “Could be a bad for long gowns.” The carpet was given an extra wash no doubt to avoid an awful stench. 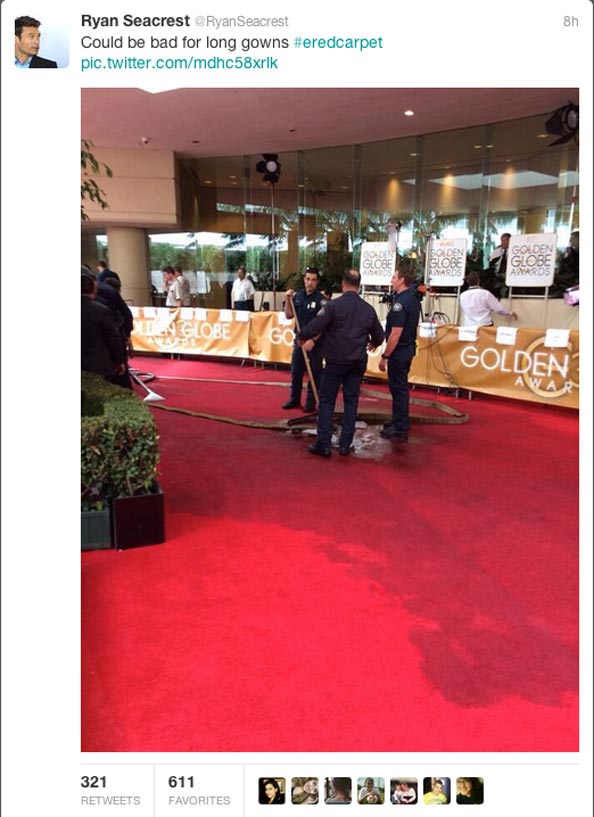 However, the star of the night has to be our favourite actress – Jennifer Lawrence. Not only did she win an award, but she photobombed Taylor Swift during an interview with Ryan and joked about pushing her down the stairs. The Hunger Games beauty was caught on camera sneaking up on Taylor before stating: “I was going to come in and push you down the stairs.” To which Taylor replied: “People would love that.”

Check out the video here from Hollywood Life:

Anyway, enough about the gossip, here are the nominees and winners for the best in TV and Film:

Best Mini-Series or Motion Picture Made for Television
WINNER: Behind the Candelabra
American Horror Story: Coven
Dancing on the Edge
Top of the Lake
The White Queen

Best Performance by an Actor in a Supporting Role in a Series, Mini-Series or Motion Picture Made for Television
WINNER: Jon Voight – Ray Donovan
Josh Charles – The Good Wife
Rob Lowe – Behind the Candelabra
Aaron Paul – Breaking Bad
Corey Stoll – House of Cards