The half-Palestinian supermodel sisters lent their fierce walks to a protest march against Trump’s anti-immigration policies.

Two of our favourite models have taken to the streets to speak out against US President Donald Trump’s immigration ban.

More than 170 travellers were denied entry to the US after the controversial executive order on immigration was signed this weekend, sparking mass protests all over the country.

The cause was a personal one for Gigi and Bella Hadid, whose parents both emigrated to the US.

Their mother Yolanda was born in the Netherlands, while their father Mohammed is Jordanian-American, Muslim, and of Palestinian descent (and Gigi has described herself as a proud half-Palestinian).

Gigi and Bella Hadid at the #NoBanNoWall march in New York today. pic.twitter.com/atHh2AkIVe

Read:
How Trump’s New Visa Ban Will Affect Those In The Middle East
Why Oscar-Nominated Iranian Filmmakers Won’t Be Attending The Awards

Fellow marchers at the New York protest were delighted to see the sisters getting amongst the action, chanting “No hate, no fear, immigrants are welcome here”.

The nations in question are all part of the MENA region, namely Libya, Somalia, Sudan, Syria, Yemen, Iran and Iraq. 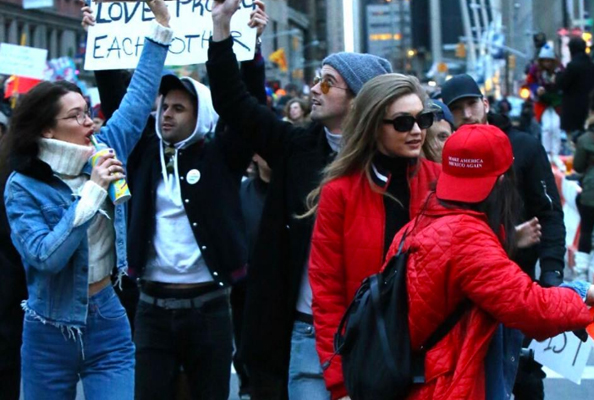 An estimated 130 million people will now effectively be unable to enter the US for the next 90 days.

Gigi Hadid is no stranger to making political statements. The 21-year-old came under fire for her biting impression of First Lady Melania Trump at last year’s American Music Awards.

Hadid also tweeted out her support for the Women’s March earlier this month, writing, “So inspired by the incredible & unique humans in this world everyday. Thank you for beautifully demonstrating how to put gender, race, religion aside & come TOGETHER for what is right.”