Get to know our November cover star and Lebanese film director, Pam Nasr 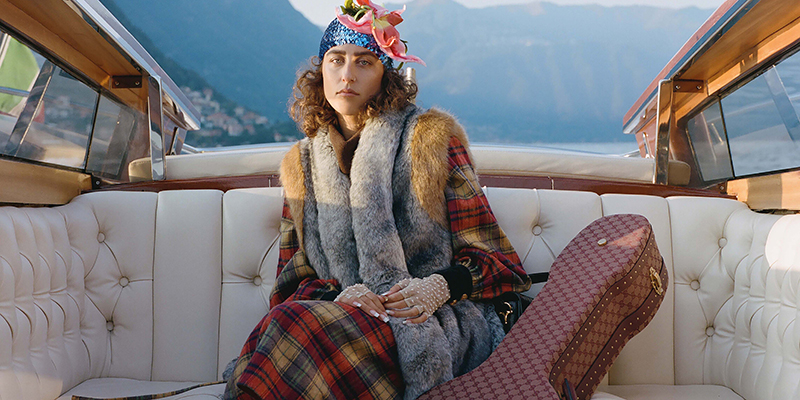 Talks all things Gucci and her debut film 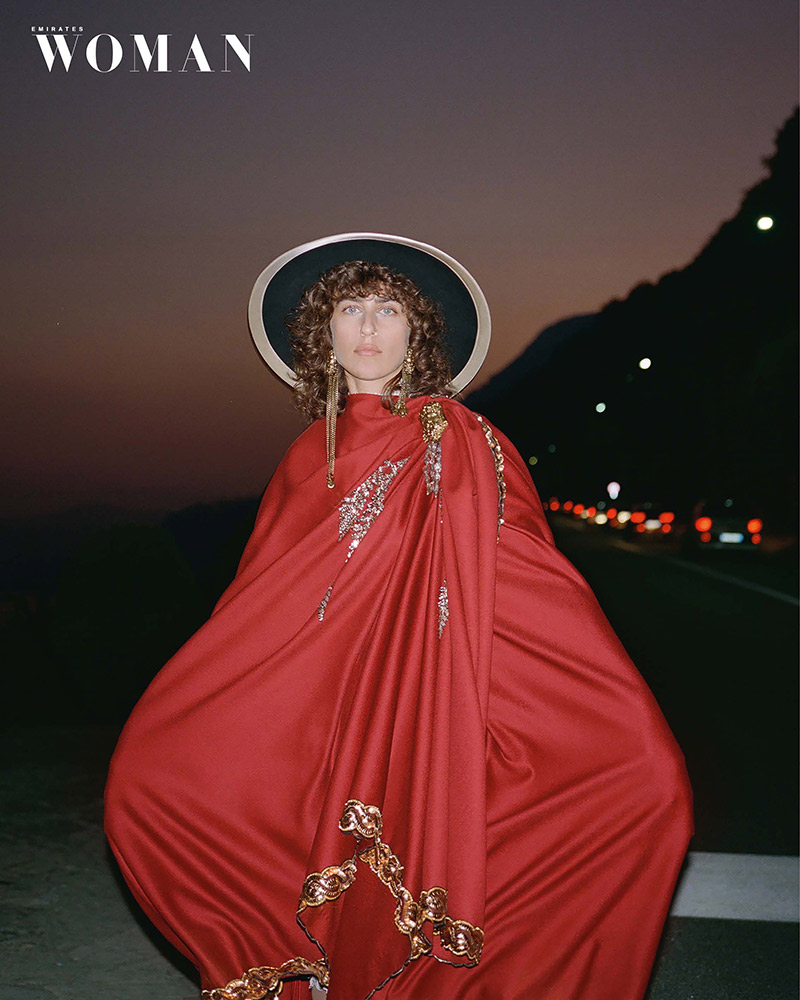 As a film director and creative what has led you to this point in your career?

My career is a reflection of my personal journey. It’s a culmination of my childhood experiences and memories, the cities I’ve lived in, my personal growth, and is the result of strictly and consistently doing what feels true to me. One of my earliest memories speaks volumes about why I’ve gotten here. I must have been seven years old at the time, my sister and I wanted to gift our parents a photo album for Valentine’s Day. We made sure they left the house before using our father’s camera, one roll of film, and our home as the set. I played the role of a man dressed in leather trousers, a black blazer, white shirt and black bow tie – all pieces from my closet, sported with slicked-back hair disguised in a low bun. My younger sister Sally was my date. She wore a white peplum dress with daisies, buckled ballerina flats with white scalloped socks and red lipstick. Our home felt like a perpetual set; we posed around the dining table, the salon and a curved laminated bar which was my favourite piece of furniture. Looking back, it was that moment where I discovered my enthusiasm for the arts.

What did you learn at the School of Visual Arts (SVA) in New York that aided you to find such a unique creative voice?

My time at SVA was super condensed, during the one year program. I learned about the entire process of filmmaking from scratch while writing the story for my first film. SVA gave me the space and tools to translate my visual creative identity and expression into a narrative motion picture. They made sure we only collaborated with filmmakers who truly understood the stories that we wanted to tell. 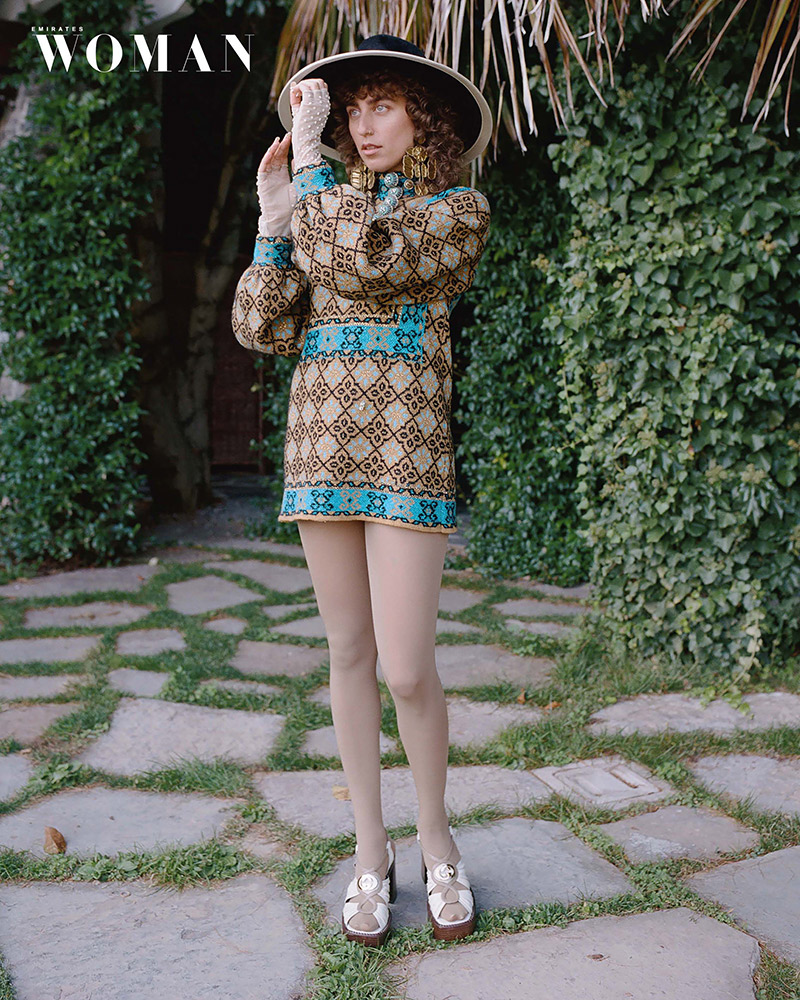 Your debut film, Clams Casino, is distinctively visual. How would you describe the aesthetics in the movie?

The visuals are highly ornate and come from a personal place. I subconsciously recreated the homes I’ve lived in. Since I had a Latin cast, I wanted to have sets that depicted homes of the Latin community in New York that haven’t been refurbished since the 80s, a little like the homes I grew up in. Coincidentally, Latin and Arab homes are dressed very similarly so it felt like a very straightforward process for me, especially since the aesthetics in Clams Casino mirror my personal style. I couldn’t help but think of my mother, the table dressing was similar to something she would have displayed on the table in our home. 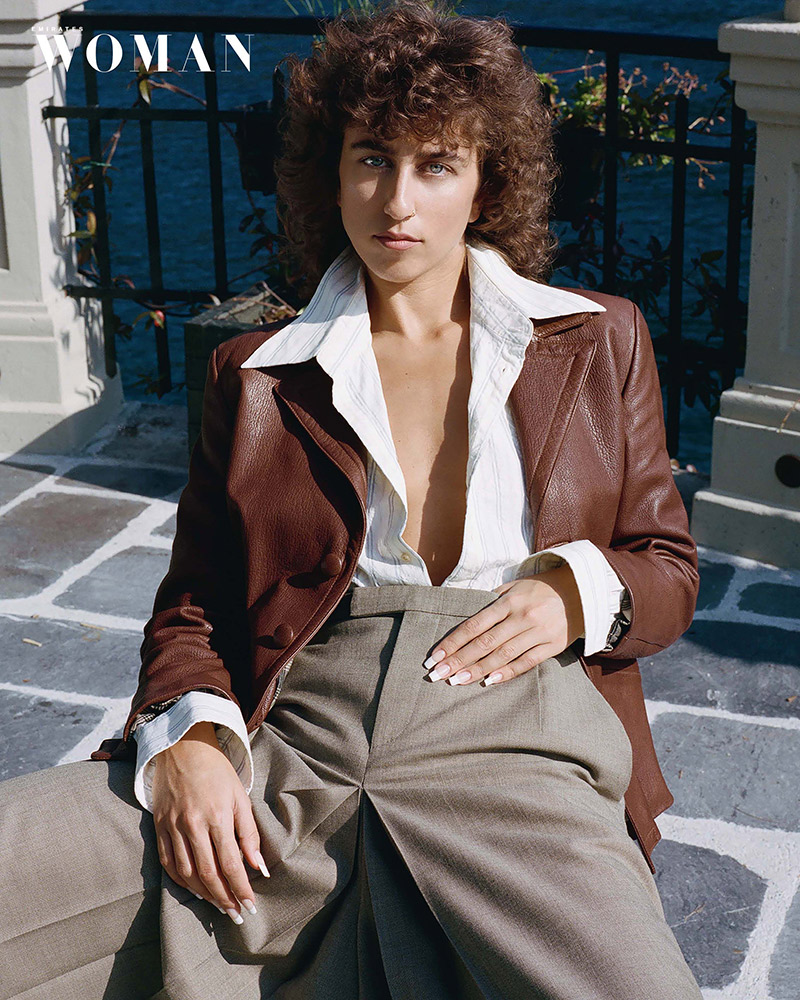 Who has inspired you to flourish in the creative field?

My creative drive and the way I choose to engage with the world around me primarily comes from my upbringing. I was given the freedom to experiment and follow my own journey from a very young age. I wouldn’t say someone inspired me, rather I owe my inspirations to everyday encounters. I feel lucky to have spent a good amount of time in four different cities; Dubai, Beirut, London, and New York. My experiences in each of them have truly shaped and informed who I am as a creative today. 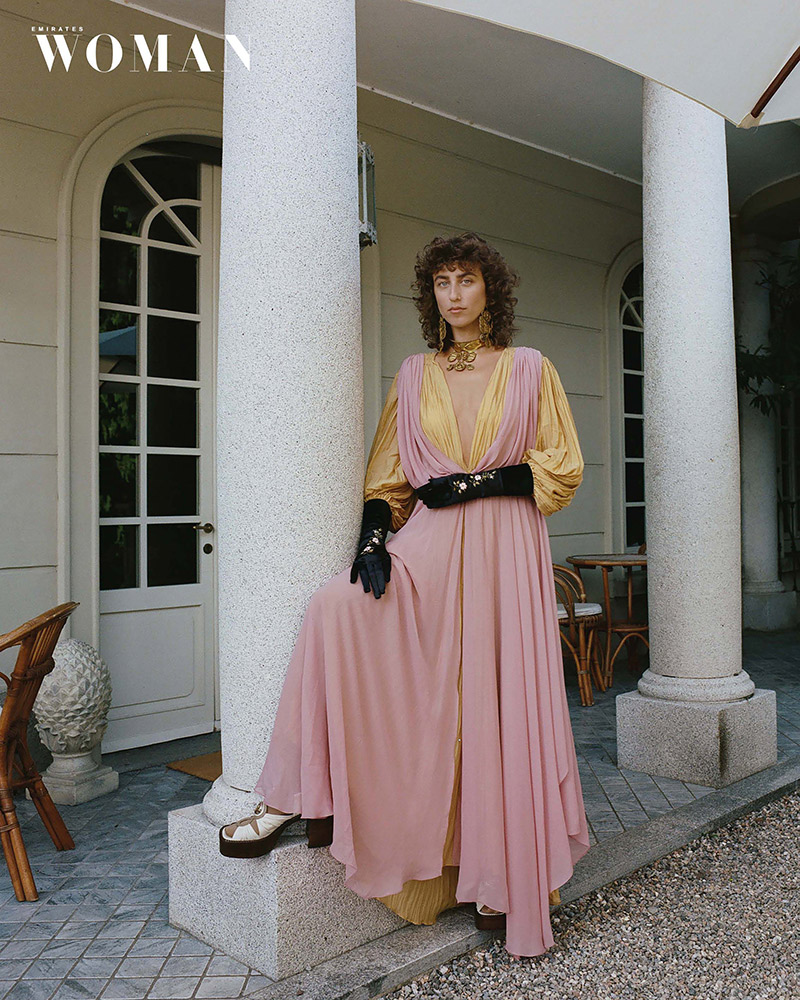 When did you know you wanted to design and direct a film? How long has Clams Casino been in the making?

I knew I wanted to make a film when I moved to Beirut a couple of years back, prior to moving to New York in 2017. It was my first time living there and I found myself processing what I was observing through the lens of my phone. It was a constant tool I used to create amateur short films documenting the people of my country. Recording is my way of saving a moment in my memory, even if I might never see that video again. Everything I’ve worked on throughout my career, from being on fashion to music video sets brought me to Clams Casino. It was the product of the consolidation of my experiences. I had the urge to explore a new way of communicating who I am and what message I wanted to send out into the world and my film debut was the perfect time to do it. The response has been the ultimate reward. 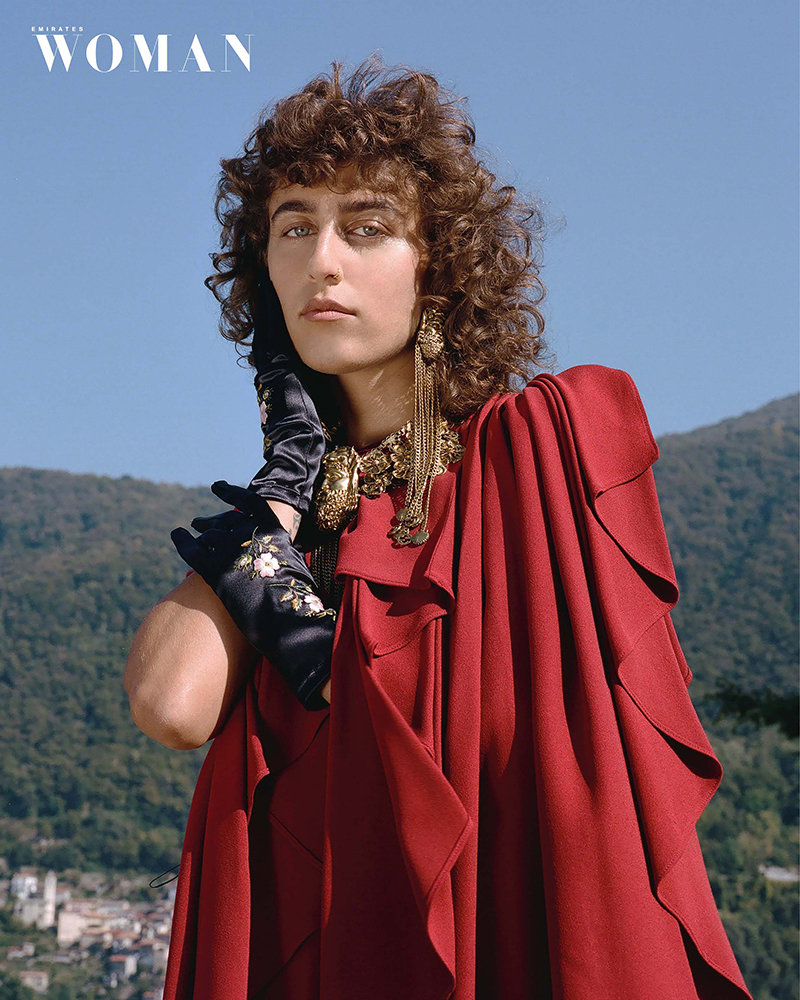 Gucci has become a mammoth and forward-thinking fashion Zeitgeist amongst millennials and fashion-peers alike. What is it about Alessandro Michele’s direction that you feel has resonated with people?

His collections speak to a broad range of cultures and generations. He knows how to communicate his collections through his shows and campaigns while merging Gucci’s strong Italian heritage with today’s social age and climate. He also truly understands what people want to wear, but more importantly what they didn’t know they wanted to wear. There’s a sense of familiarity in how he’s presented Gucci. He’s allowed people to feel like Gucci is theirs.

What piece from the collection most defines you as Pam?

The black-feathered, bedazzled headpiece in the opening look – it has the aura of a warrior. 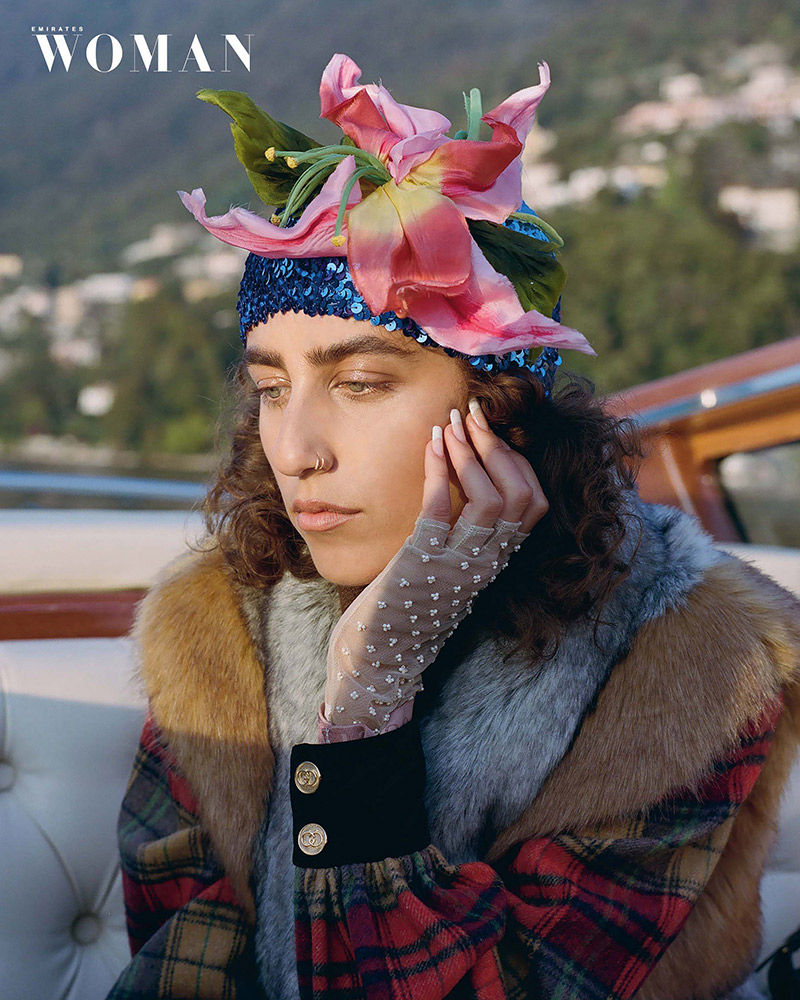 Being Lebanese, how do your Middle Eastern roots influence your work as a creative?

In every way possible, everything I create stems from the environment and the culture I was raised in and my memories growing up between Dubai and Beirut, two starkly different cities. The video archive I’ve collected while in Beirut as well as growing up in such a diverse city as Dubai allowed me to interact with many cultures and understand people beyond my own. I’ve been able to add the multiple elements of variant cultures to my work. The concept of family is one that holds great weight in the Lebanese culture, and I found it to directly inspire the way I constructed Clams Casino.

Why was Mukbang something that intrigued the narrative in Clams Casino? It might be seen as quite an alien concept to the masses?

When I first discovered the South-Korean phenomenon, I needed to explore the reason behind its existence. I couldn’t help but deconstruct it. I wanted to bring as much humanity to this phenomenon as possible. I see Mukbang as a solution that was created as an outlet to relieve people of their loneliness, rather than just a viral phenomenon. Essentially, I treated Mukbang as if it were a shy person that comes off as rude or standoffish. The films I’m drawn to are ones that are based on real experiences, I took something that may seem superficial and delved deeper into the human experience of it. Loneliness is a very common experience and I wanted to showcase the many forms that it exists in. I wanted to expand on the concept of how such a peculiar phenomenon like Mukbang can only feel so at first, but if we give things a little bit of our time to unpack, we’ll then see how much we can relate to it. 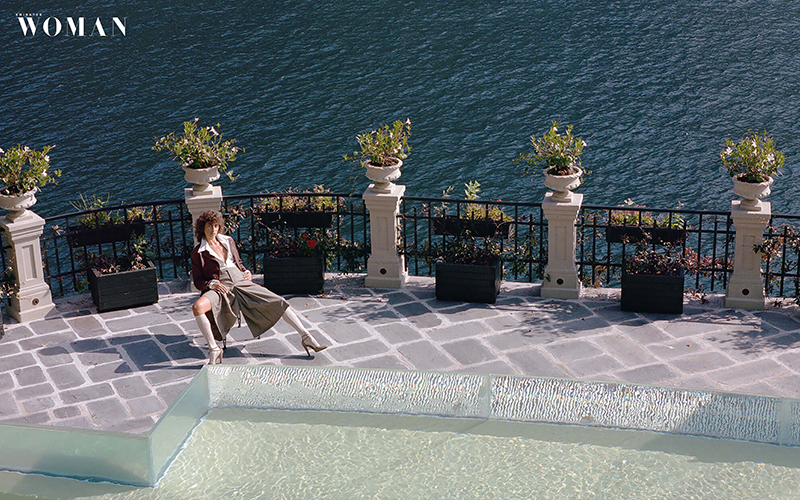 The film has very Gucci-esque aesthetics. What made you pay so much attention to the dichotomy of surreal and beautiful?

When I think of my work, particularly Clams Casino, the expression I often use to describe it is “realistic surrealism”. I find the human experience a beautiful one, and I see my job as a storyteller as making it look aesthetically pleasing; I need the viewer to feel transported into a specific world. I’m also very drawn to the collision of contrasting and contradicting themes – it’s who I am and where I come from. In Clams Casino, I portrayed my own version of what Mukbang sessions look like while saturating the film in my own aesthetics. The beauty in filmmaking is that you have the power to story tell using a variety of layers.