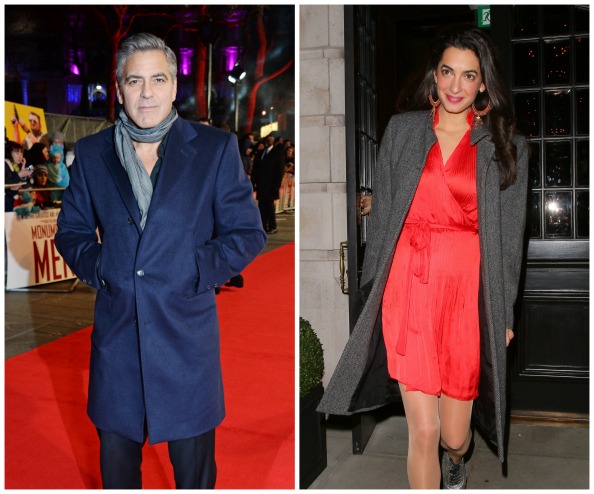 Do you hear that sound? It’s the sound of a million hearts breaking as Hollywood’s, no, scrap that, the world’s, hottest bachelor George Clooney has decided to ditch his single lifestyle and make an honest woman out of his girlfriend Amal Alamuddin.

The serial bachelor, who has dated a plethora of gorgeous women from British model Lisa Snowdon to Italian TV star Elisabetta Canalis and former WWE Diva Stacy Keibler, popped the question to his British Lawyer girlfriend of six months Amal, with the brunette beauty spotted recently seen showing off a ring at Nobu in Malibu, California on Thursday while dining with George’s friends model Cindy Crawford and Actor Edward Norton.

A source close to the couple said: “George and Amal are trying to keep things very low-key but they also aren’t really trying to hide this, it doesn’t seem. I think it’s like they want the people they love to know that this is real, that they plan on being together forever.”

After splitting from his first wife, actress Talia Balsam – they were married between from 1989 to 1993 – George has been adamant that he won’t be repeating his marriage vows. He said in an interview last year: “I haven’t had aspirations in that way, ever. I was married in 1989. I wasn’t very good at it.”

But, it seems the notorious bachelor has fallen head over heels for Amal as he finally ends his notorious bachelorhood status. The couple have worked hard to keep their relationship out of the public eye. They were first spotted together last October and since then on Safari together in Tanzania. Amal has yet to walk the red carpet with the 52-year-old hunk.

The secret to their relationship success could boil down to the fact that unlike many of George’s past girlfriend’s Amal is not in the showbiz world – the 36-year-old humanitarian lawyer. Either way, this lady must be super-special to bag one of Hollywood’s most famous singletons. We guess there’s still Jack Nicholson…