WOMEN PUT IN THE SPOTLIGHT AT FIFA WORLD CUP 2014 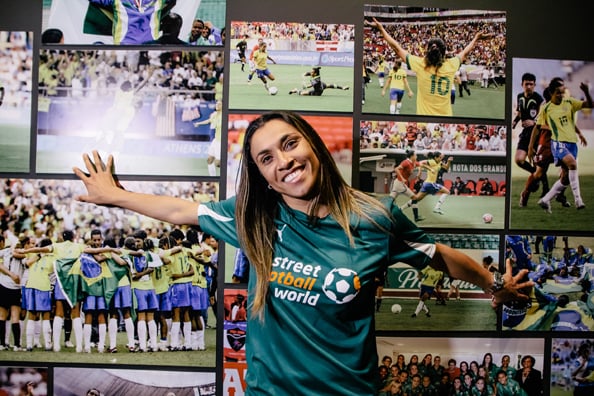 She’s known in South America as Pele in a skirt and now Marta Vieira da Silva, the formidable five-times female  player of the year, has made new strides in women’s football opening the Football For Equality Plaza – a space that sheds light on how the world’s most popular sport can encourage liberation and social revolution.

With the FIFA World Cup 2014 kicking off on Thursday, one of the most exciting initiatives to have just been unveiled at Football For Equality Plaza is the exhibition, Women On The Pitch.

Delving into 100 years of women’s football in Brazil, the exhibition is the focal point of the Equality Plaza. “Combining this cause with the social side of football is perfect, because we can show the public that it is possible to transform lives through our great national passion. This is a huge step towards a real social legacy that we all envision for sports mega events in Brazil,” says Marta, the official patron of streetfootballworld and Goodwill Ambassador to the United Nations Development Programme (UNDP).

According to organiser Niko Wieland, the exhibition, with its realms of video and photo documents, details “a century-long struggle for acceptance and respect on and off the pitch.” Demonstrating both the passion and commitment of female football players, the exhibit should go a long way in inspiring a generation of girls to break free of the prohibitory stereotypes placed upon them.

The exhibit proves that a lot has changed since actress and comedian Phyllis Diller famously proclaimed: “The reason women don’t play football is because 11 of them would never wear the same outfit in public.” But the startling fact of the matter is that the ban on women’s football was only lifted in Brazil at the end of the military dictatorship in 1979.

So if you’re heading to Rio for the World Cup, make sure you pay a visit to the Football For Equality Plaza and find out why Brazil – and indeed the world – should be making the beautiful game even more beautiful.

The exhibition runs throughout the duration of the FIFA World Cup 2014.