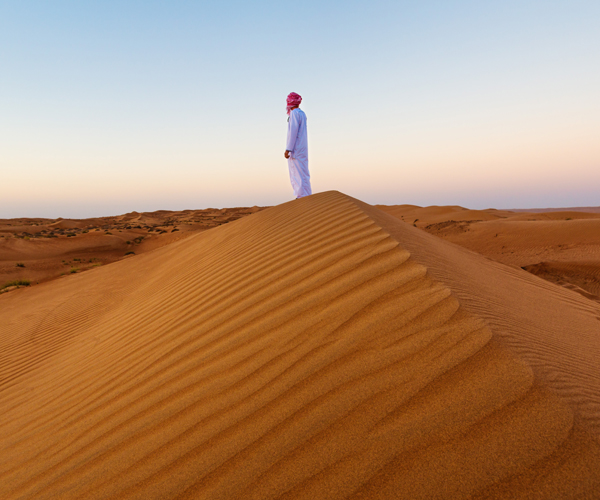 She made history as the first documented woman to travel to every sovereign nation, so Cassie De Pecol knows a thing or two about the world’s most beautiful spots.

The 27-year-old American completed her mission earlier this year, and in record time too – her world-recording-breaking trip took an impressive 18 months and 26 days.

A question that sometimes drives me hazy: am I or are the others crazy? 🌎 – Albert Einstein • • • #Expedition196 #PeaceThroughTourism #EveryCountryInTheWorld #UnitedArabEmirates #Desert

The activist set off from her home in July 2015 on a quest to raise awareness for peace and sustainability.

Read:
This Turkey-Based Female Pilot Hopes To Inspire More Women Into The Cockpit
A Saudi Prince Bought 80 Plane Tickets To Transport His Falcons In Style

Among them includes one Middle Eastern gem rather close to home – the Sultanate of Oman.

The scenic coastal nation, which curves through the Arabian Peninsula, is jam-packed with deserts, ancient forts, turquoise waters and spectacular mountains.

So, why exactly should you visit?

To move, to breathe, to fly, to float. To gain all while you give. To roam the lands of roads remote. To travel is to live. – HC Andersen

“To immerse yourself in the desert and mountains, while learning from locals who live in the mountains, it’s a whole different lifestyle,” De Pecol told the Daily Telegraph.

The American told Forbes she stayed at Six Senses Zighy Bay Resort on the northern Musandam Peninsula, while her Instagram account also shows she travelled down to Salalah.

Read:
Travel Calendar: Our Monthly Guide To The Best Destinations for 2017
This Airline Is Introducing Women-Only Rows To Keep Travellers Safe

De Pecol also listed Tunisia, Pakistan and the Maldives as destinations to tick off the bucket list, with all a short(ish) flight away from the UAE.

Citing the Maldives’ “bluest water and whitest sands” as a reason to visit, the peace promoter also revealed she fell in love with Pakistan’s food and “raw, authentic culture” along with Tunisia’s “immense amount of archeological history”.

New vlog coming up soon of my experience at #SonevaFushi in the Maldives! 🐬♻️

Anyone else got the itchiest of feet right now…?