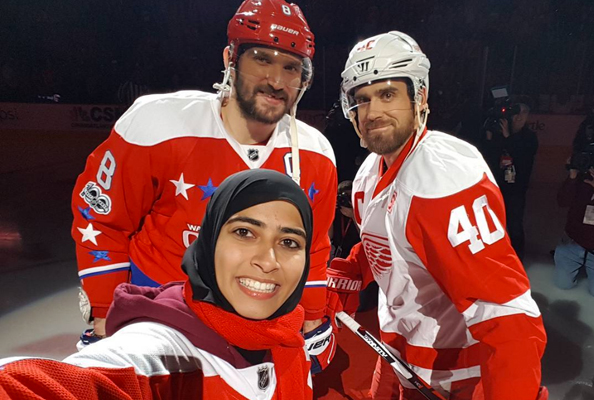 Fatima Al Ali’s neat trick with a hockey stick landed her a meet-and-greet with a top American team.

Nike may have just tapped two Emirati sportswomen for its latest inspirational campaign, but we’ve got a third it should add to its roster.

Fatima Al Ali is an Abu Dhabi-based ice hockey player, coach and referee who just won herself a fan in a world-class athlete.

Al Ali’s ability to twirl a puck on her hockey stick caught the eye of US hockey player Peter Bondra while he was in the UAE capital coaching at the Zayed Sports Ice Rink.

Read:
The Bootcamp Beloved By Many A Celebrity Is Coming To Dubai
These Emirati Athletes Are So Inspirational, Nike Have Snapped Them Up

The former Washington Capitals all-star shared a video of Al Ali’s trick on his Twitter page, stating “it’s safe to say she has better hands than me”.

This is Fatima. She represents the UAE on their women’s national team & it’s safe to say she has better hands than me! @Capitals @MSE @NHL pic.twitter.com/m4N2IddeRl

After seeing the stunt, the Capitals invited Al Ali all the way to the States to meet the team – including her favourite player, Alex Ovechkin.

The Emirati was given the honour of making the ceremonial puck drop at a game over the weekend, and she used the opportunity to quickly snap a selfie with the players.

Read:
These Women Are Trekking 120km Across The UAE For A Great Reason
Meet The First Female Commercial Pilot From Dubai’s Royal Family

“I was like, ‘Can I do it or not?’” Al Ali told NHL.com of her photo with Ovechkin and Red Wings captain Henrik Zetterberg. “It was just an idea. I’m happy it worked.”

The 27-year-old, who is now back in the UAE, has since called the trip “the best experience of my life”.

“It’s better than a dream,” she told CBS News.

Sad to say that I’m going home had an amazing time in DC with a busy week filled with #hockey & #basketball got to meet the #players be on the #ice with them got to watch the warm up from the #bench & drop the #puck 🏒 Thanks guys for meeting me & making it the best experience of my #life & hope to see you soon ❤ Go Caps! @ovi8 @backstrom19 @tom_wilso @justinwilliams @nate schmidt @kuzya92 #selfies #WashingtonCapitals #capitals #hockeylife #enjoylife #washingtondc #caps #usa #fatima_al_ali

Al Ali also told NHL.com that she hopes her story will inspire other Muslim women.

“I hope set a good example for them and if they have a dream just follow it,” she said. “There’s nothing that can stop them.