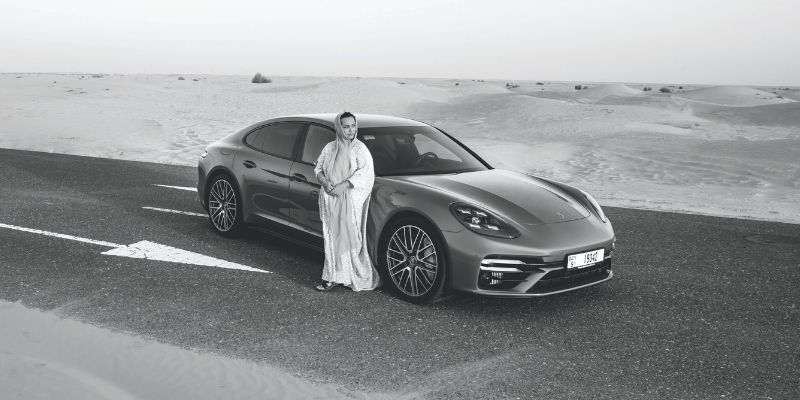 We speak to Nayla Al Khaja who’s the first female director and producer in the UAE on partnering with Porsche to motivate others to pursue careers in a male-dominated profession and what exactly it’s like to be pioneering women and how they plan to pave the way in the GCC.

You’re a woman of many firsts in your career. What is it like being a woman in this region to pave the way for others?

It’s an immense, honourable responsibility. I see the messages and emails I receive from girls wanting to follow in my footsteps, and I don’t take this lightly at all. It drives me to do more, push boundaries and have my voice heard. To know that I have an impact on women and also men gives me an internal drive, a motivation inside that doesn’t die. I hope to be able to guide those around me interested in filmmaking, especially the younger women and let them discover their own journey in life.

What are your hopes for women in the future in the UAE?

I hope the women of the UAE find the passion they are looking for professionally and personally. I know mental health is a big topic in the world at the moment and while I believe it’s important to stay positive, it’s also important to be transparent and to reflect from within, understand all emotions and in return address them. With that said, I hope the women in my country find their voice, their passions and positive mental health.

I’m confident that we will all have an incredible future in the UAE given all the current opportunities at hand for women. From every field whether criminology, business or judiciary, you will find women taking on roles which is truly inspiring.

Can you talk us through the campaign with Porsche to inspire young females across the GCC?

Teaming up with Porsche for #DriveDefinesHer has been an incredible experience. The campaign was launched to celebrate the new Panamera and has shone a spotlight on inspiring women across the region by showcasing their aspirational stories through video, while encouraging other women in the Middle East to pursue careers in male-dominated professions. The campaign is centred around Porsche’s commitment to supporting female leadership within the company and beyond and this is something that resonated with me, as it’s a passion of mine to inspire the next generation of young female Emirati filmmakers.

Working with Porsche in the region has been so special and natural for me. I’ve always loved the brand, it’s heritage and the cars they’ve built. The campaign effortlessly captures the power of a female and the car, soul and spirit, alongside each other in such a way that highlights the beautiful balance of both. Like the Panamera, the campaign is powerful, yet elegant, bold and loud yet feminine, giving me a sense of empowerment and safety. 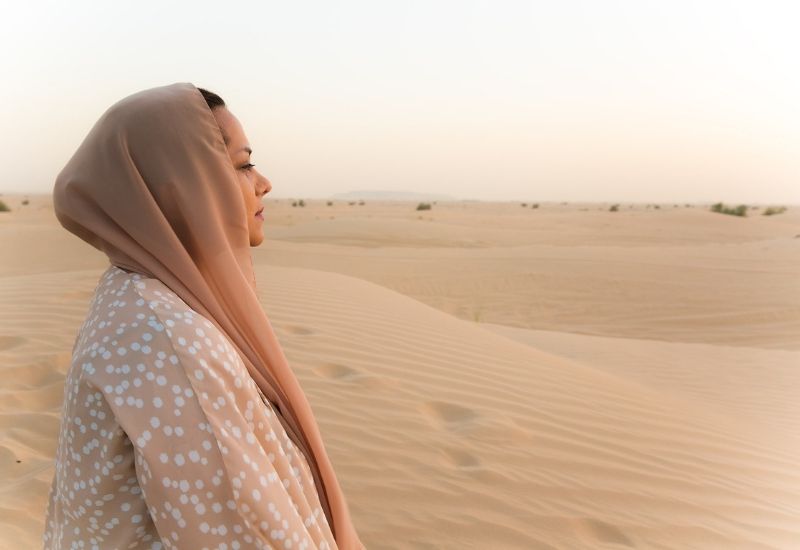 To you, what does being a role model mean? How do you execute being a positive role model to others?

Being a role model is something that I honour and always give a lot of thought to, to push further and aim higher in my work. To constantly be learning and challenging myself.

Nothing in this world remains constant and I find it very important to always embrace change and emotion. I’m in the motion picture business so from my perspective, I too have to constantly be moving, be ahead of the curve in life but in a way that actually creates impact.

The real challenge is to stay relevant while being a role model, which in return motivates me to stay hungry and continue to learn so I can give back.

What do you believe it takes to break down barriers in male-dominated professions to make positive strides for women in this region?

Your work will have to speak on your behalf and break down barriers. It will travel further than you, speak volumes of you. So in a male-dominant profession, I should just forget about that, focus on myself and work, and allow that to speak for itself.

Once that happens, the barriers start to fall one after the other. I believe when you’re creating a story you truly believe in, stay focused, hire a strong team, have the right pillars and give it your all, it will find a platform, whether regionally or internationally as well.

Women in the film industry from all around the world have their challenges but one common thread is that it’s a male-dominated industry. But this is where we should continue to do what we love, the beauty and magic that is storytelling, so we can continue to be our own role models and attract more female talent to the industry.

What advice would you give to young women in this region?

Volunteer. Whatever industry it is that you love, volunteer. Shadow someone who’s been doing it for years. Research the insides of that field to determine if there’s anything specific that you like – or you might just realize you’re just not that into it.

What have been three hurdles you have experienced in your career?

First, it was education. I had to travel abroad to be able to study film as there were no schools providing that here. It wasn’t easy to convince my parents, but I was able to do it!

Second, it was infrastructure. Being the first female filmmaker, I didn’t have access to a lot of resources like gear or crew members which was heavy on the pocket as I had to fly it in. Equally, it was difficult to find people who believed in me and would agree to fund my film. Thankfully, I was able to overcome that by simply following my heart and the stories that I’m passionate about which was contagious, and I was able to find people who agreed to finance my projects.

Last, it will be the robust TV commercial industry here, vs. an active film industry and the lack of government movie funding. It would be great to see private investors supporting Emirati talent and government funding.

What have been the major milestones in your career?

One big milestone is when Sheikh Nahyan bin Mubarak Al Nahyan announced me on stage as the first woman director in the country. That beautiful night inaugurated my career which had such an impact with the media at that time. For a girl that was so young, the inauguration speech was like a dream come true. I had to find the courage to contact his office and speak to his highness to invite him to attend my film!