An Emirati Designer Has Created A Caftan To Help Fight Cancer “It was a real battle,” says Yasmin Al Mulla of her mother’s fight with colon cancer.

The Emirati designer, who’s behind Dubai-based fashion label YNM, describes her mum’s experience as “the toughest period of our lives, a life changing phase”.

However Al Mulla’s mother – “not a ready quitter” – made a remarkable recovery following months of chemotherapy and surgery.

Read:
Kanye West Cast This Barrier-Breaking Hijabi Model In His NYFW Show
This New Campaign Has A Powerful Message For Women In The Middle East

“The day she was cured, after [being] confined to bed for months, suffering enduring pain and intense sleepless nights, brought the biggest joy we have experienced in life,” Al Mulla says – and now the designer hopes to help families in a similar situation.

Al Mulla has designed a limited-edition caftan, named “The Noora” in honour of her mother, and a percentage of its sales will go to the Colon Cancer Alliance. 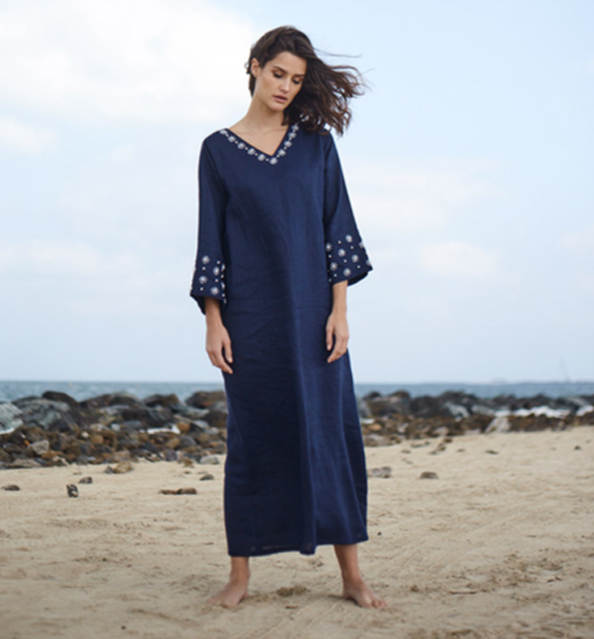 “The navy blue represents the Colon Cancer colour, and the transparent glass beads reflect purity, pearls attract luck, while the floral embellishments mean blooming hope,” she says of the design.

The piece, which will go on sale at YNMdubai.com from March 3, will help aid the charity that supports cancer sufferers around the world.

Read:
Bookmark This: Here Are Dubai’s Best Salons & Hair Stylists
Princess Haya: If We Don’t Help The Hungry, ‘We Lose Our Humanity’

Currently, colon cancer is second leading cause of cancer deaths in UAE, according to Gulf News.

“[It’s] the least I can do to express my gratitude toward my mother’s journey,” says Al Mulla of the caftan.