Emirates Woman Woman Of The Year Awards 2017: The Round-Up 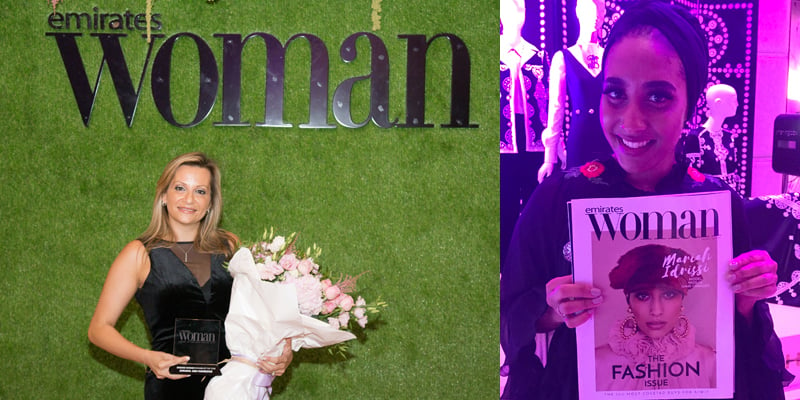 All the glitz, the glamour, and the inspirational winners…

She was described on the night as providing a “philanthropic and moral example” to us all.

And after dedicating her career to helping provide loving homes for children at risk, Jumana Abu-Hannoud made an incredibly deserving winner of the Emirates Woman’s Woman of the Year Award 2017.

In association with sponsors Tory Burch, 55fifty7, Volvo, Grand Optics, TechnoGym, The Westin Mina Seyahi, African & Eastern, Events Library and Jacobsons Direct Marketing Services, around 350 guests gathered on Monday evening to celebrate some of the most inspirational women living and working in the Emirates today. 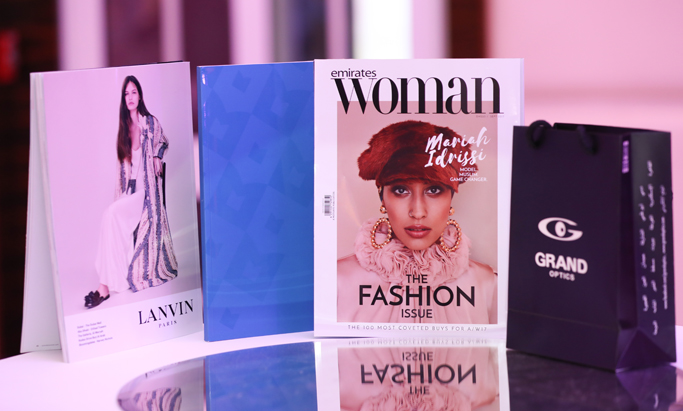 Our September edition made a stylish addition on the tables. 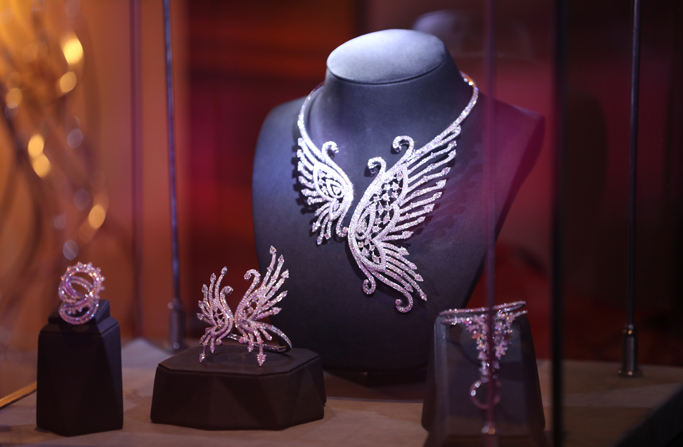 Some of the beautiful 55fifty7 jewels on display. 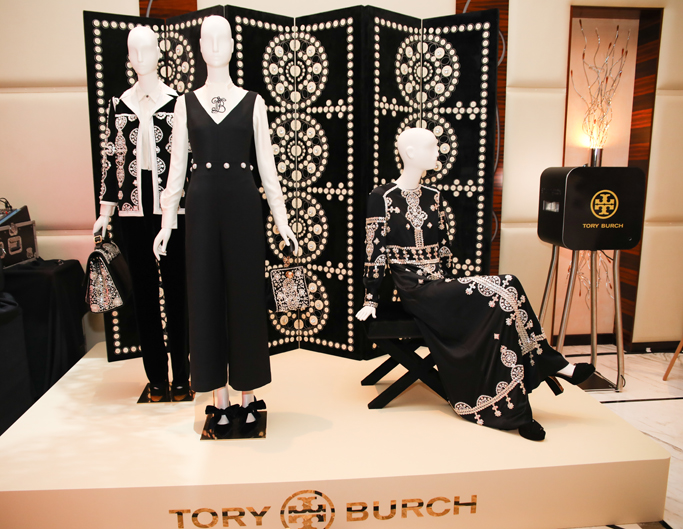 Some key pieces from Tory Burch’s collection made a stunning backdrop. 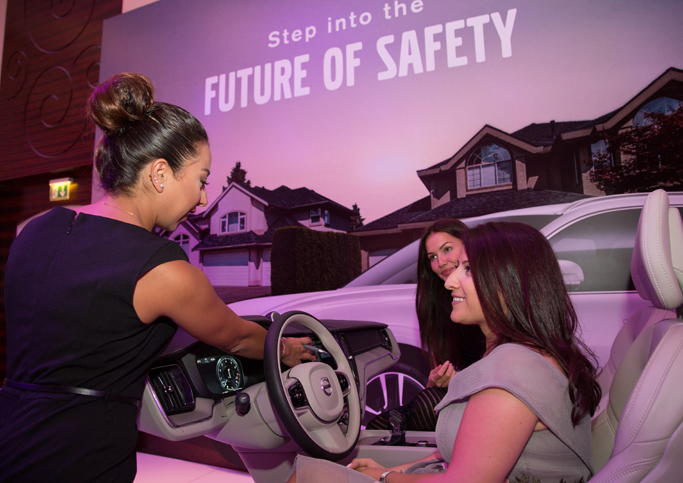 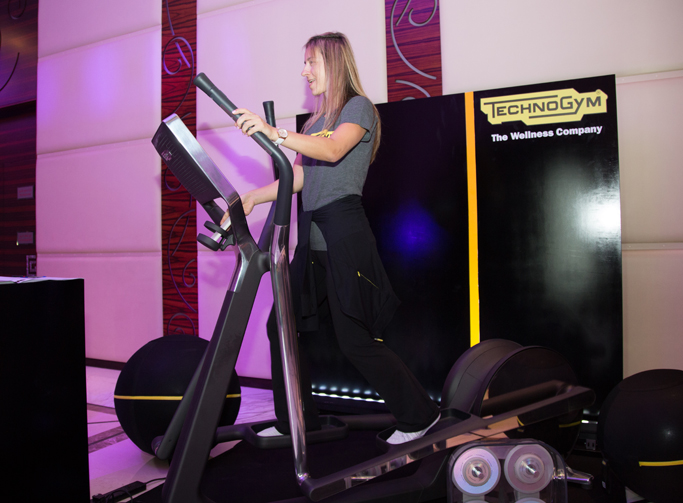 After strutting down a soft pink carpet, guests nibbled on delicate canapés and sipped bubbles underneath the Westin Mina Seyahi’s architecturally sculpted chandeliers before the ceremony began. 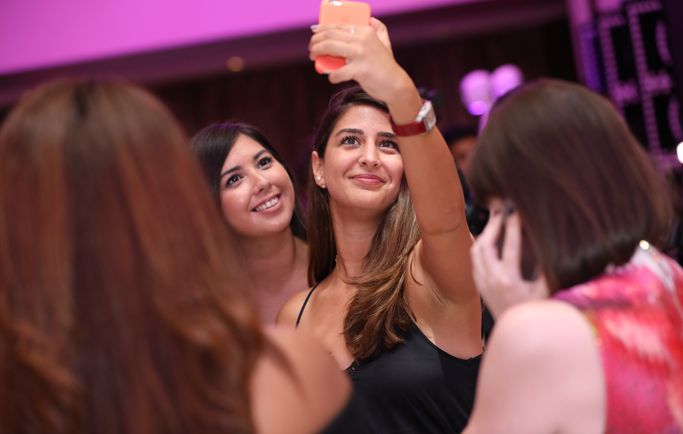 As the soulful sounds of Dubai-based band Unison welcomed gown-and-tuxedo-clad attendees into the artfully rose-strewn ballroom, our 25 finalists mingled with guests before master of ceremony Mina Liccione kicked off proceedings. 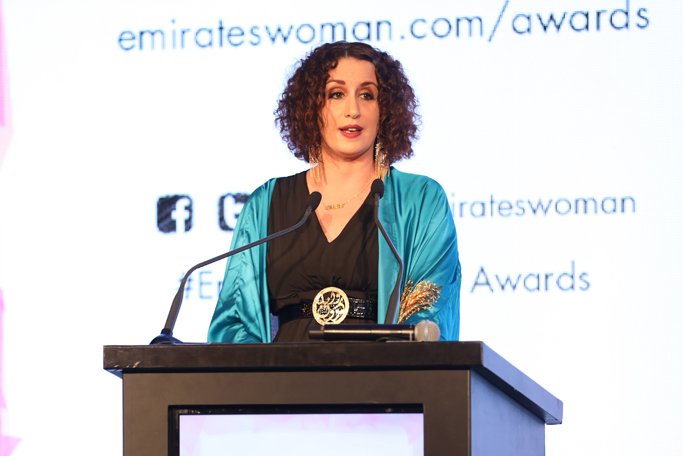 The game-changing hijabi model, who jetted into the UAE for the awards, detailed her astounding rise to fame to a rapt crowd, revealing that just two years ago she only had 200 followers on social media.

“I was scouted in a shopping centre by a casting agent, who said that H&M were specifically looking for a girl in a hijab and I fit the criteria – even though I had no makeup on and was in a tracksuit,” the London-born model joked.

Her starring role in the fashion brand’s 2015 campaign made headlines around the world, with Idrissi widely celebrated as the world’s “first hijabi model”.

“I still remember looking at my mum and going, ‘Really?’ Let me just Google that,” she told guests. “But apparently so. 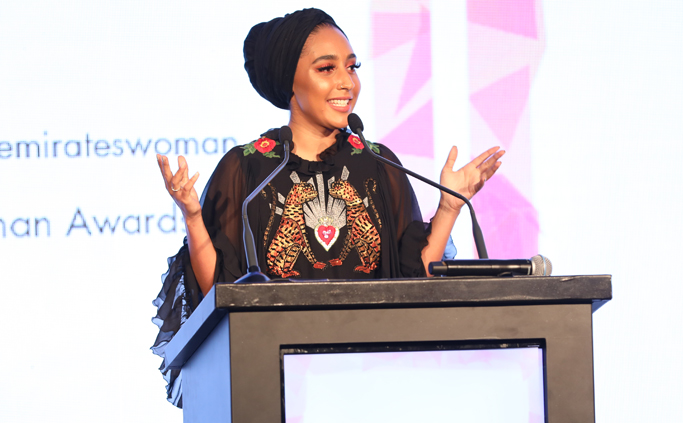 “As happy as I was, I was a bit disappointed that in 2015 that was the first time we’d seen a girl in a hijab used in marketing for a fashion brand.”

However the 25-year-old is using her profile to shake up the industry, revealing to the audience that “it’s beyond fashion and beauty, what I’m trying to do”.

“I’m trying to simply create inclusivity in this industry and in the entertainment industry as a whole. I’m trying to create more representation for the 1.8 billion Muslins in the world because for so long we have not been represented,” Idrissi said, to applause and cheers.

“Things are really starting to change. As much as we keep talking about a lack of diversity, I think we are slowly seeing some improvement [in the fashion and beauty industry].” 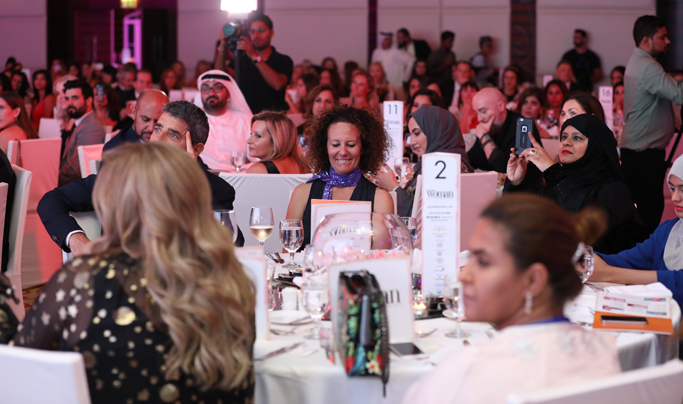 Indeed, the empowering Emirates Woman Woman of the Year Awards nominees are also leaders in their fields, each making a marked difference to the UAE and beyond in the realms of art, business, philanthropy, entertainment and more.

And after tucking into a sumptuous three-course meal, the long-awaited winners of our five prestigious categories – as voted for by you, our readers – were finally unveiled.

So, who walked away with the trophies on the night? 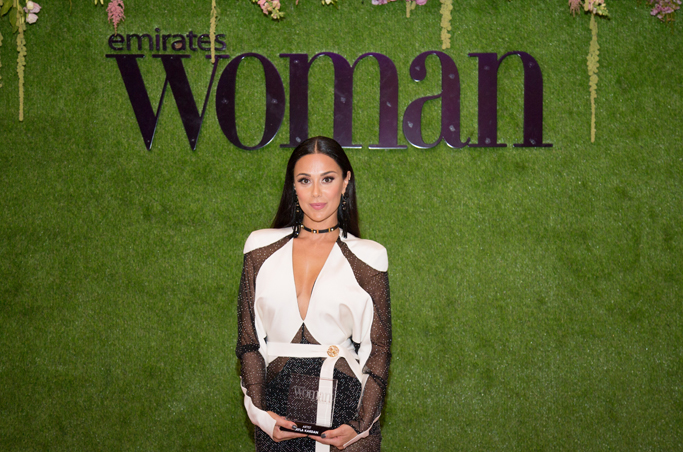 Artist of the Year, Layla Kardan.

The first award went to Layla Kardan, who was revealed as the Artist of the Year, in a category sponsored by Tory Burch.

The singer, songwriter and artist, who worked in business for 13 years before taking the plunge and following her musical dreams, said she was “so overwhelmed” by the accolade, revealing: “I wasn’t expecting it”.

“I’m really grateful to Emirates Woman for giving women this platform across several categories to be recognised for their work,” said Kardan.

The performer, who has been working on her first album, recently arrived back in the UAE after visiting New Zealand to work with a music producer.

“I want to be the first Middle Eastern female crossover artist in the electronic soul/pop genre on the global stage,” she told EW. 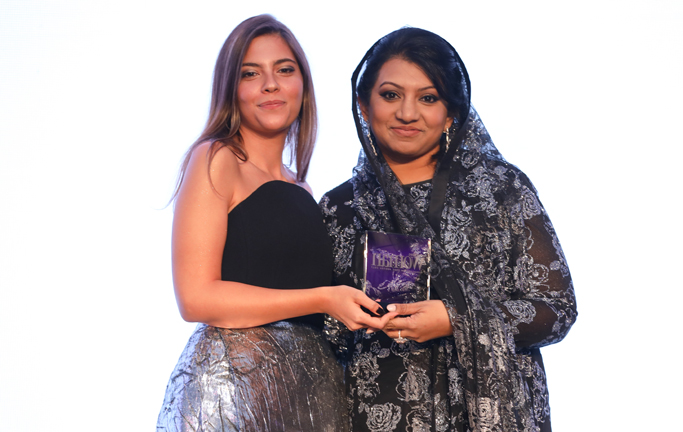 The second chic glass trophy went to Shafeena Yusuff Ali, CEO of Tablez food company, who was crowned our Achiever of the Year.

The entrepreneur, who uses her business to bring internationally renowned food concepts to the region, credited her family with helping her succeed.

“It’s a huge honour,” she told EW backstage. “I want to thank my mother who gave me roots, my father who gave me wings, my husband who gave me legs to walk and to stand, my sisters, and my team who are so wonderful in making all my crazy dreams come true.”

Ali, who is behind the arrival of Famous Dave’s, Genghis Grill and Sugar Factory in the GCC, said the future holds exciting prospects for Tablez.

“There’ll be more restaurants, more hotels, basically anything interesting that comes my way,” she said.

Read:
This UAE minister has made it into the World Records
When Sheikh Mohammed met Princess Diana 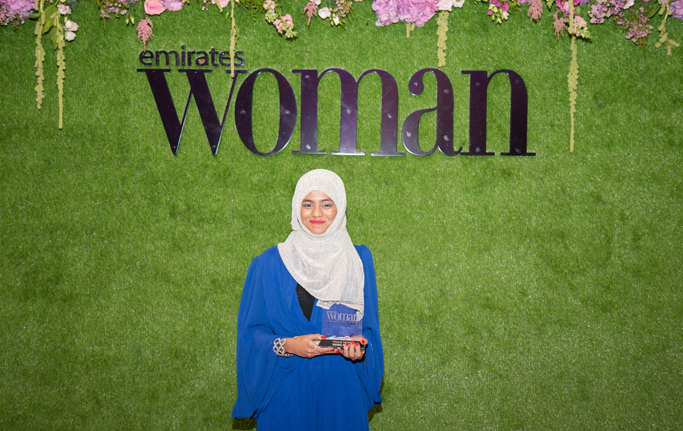 Sponsored by 55fifty7, the Young Talent award, which honours some of the UAE’s most game-changing up-and-comers, went to CEO & Founder of Step-Up, Saima Khan.

“I still can’t believe it,” the 18-year-old said shortly after her win was announced. “I thought as the youngest nominated, there’s no way I’m going to get it. I’m not going to sleep tonight; I’ll have to call all my friends.”

Khan’s company, which provides a platform for youngsters to engage with social and humanitarian activities, is now planning to host a beach clean-up event to nurture the UAE’s iconic coastline.

Next up was the Humanitarian category, which was awarded to Jumana Abu-Hannoud, Managing Director of the Gulf Area Office of SOS Children’s Villages International. 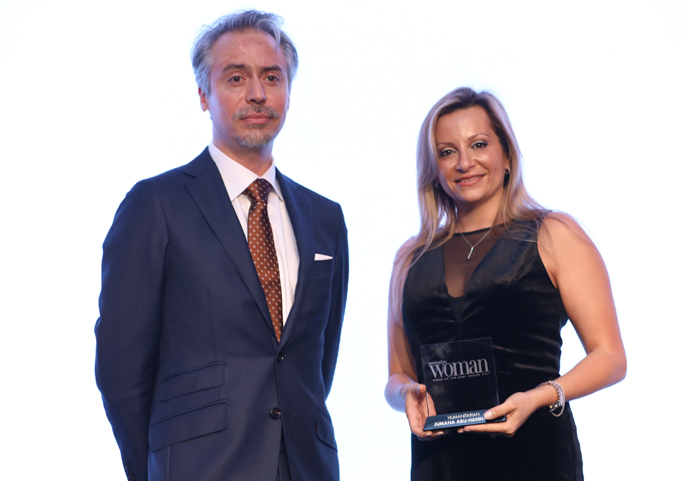 “I find my inspiration in the strength that people show during diversity – it makes me reach within myself for my own courage and determination,” Abu-Hannoud told EW.

The humanitarian also paid tribute to her fellow nominees, revealing “it’s really, really amazing to be surrounded by so many inspiring women”.

“I was excited, I was nervous and I was hoping for the best. If you think like a winner you’ll win regardless of the outcome.” 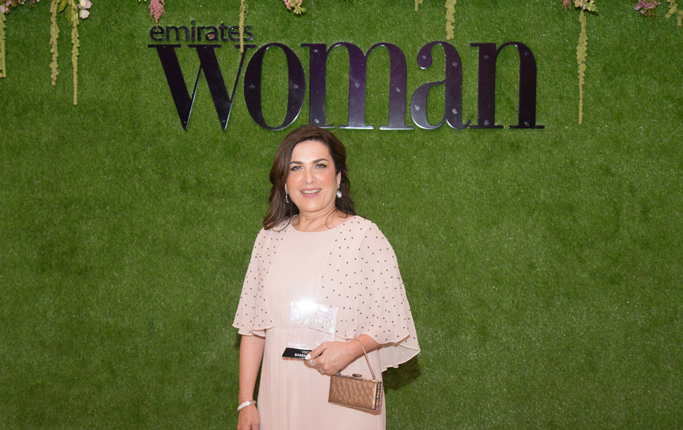 Admitting she was both “overwhelmed and touched” by the honour, the beauty entrepreneur thanked her family for supporting her, revealing “without them I couldn’t have done it”.

Karim, who has 17 locations across the UAE in her salon portfolio, has no plans to slow down her beauty revolution either, telling EW “we’re still growing as a brand”.

“We’re still innovating and bringing in new and interesting creations to the beauty industry – and we want to serve our customers better and better.”

So, who took home the overall Emirates Woman of the Year award? 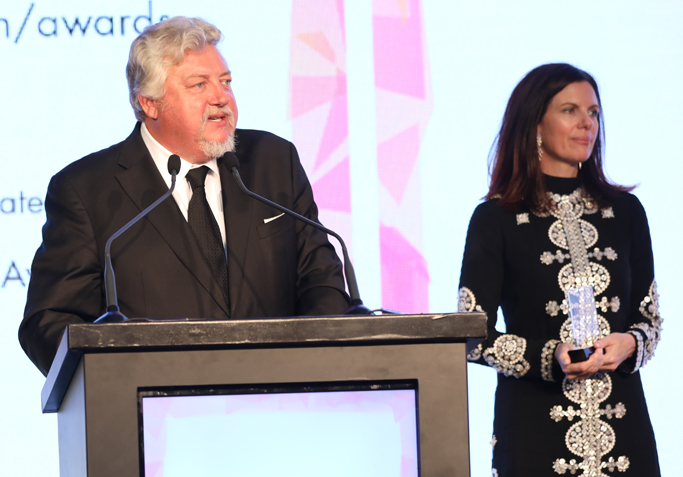 The honour went to Jumana Abu-Hannoud, who was described as a “philanthropic and moral example” by Motivate’s Group Editor and Managing Partner Ian Fairservice in a moving tribute.

“Despite the sometimes heartbreaking nature of her work, where one in 10 children worldwide grows up without adequate care, she has devoted her life to improving the lives of children at risk,” he said before welcoming Abu-Hannoud to the stage.

Clutching a bouquet of flowers before revealing that one of her biggest fears was speaking on stage, Abu-Hannoud showed no nerves as she addressed the audience in her acceptance speech. “Thank you so much for a privilege that’s beyond my wildest dreams,” she said, sharing her gratitude for “everyone who has and is willing to support the children of SOS”.

Abu-Hannoud, who has also served as a Public Relations Officer for the United Nations High Commissioner for Refugees, added that the award was a “wonderful and huge responsibility” that gave her a platform to relay her human welfare message.

“One thing that’s very important that I’ve learned is that whatever accolade a person achieves, it’s not personal,” she told Emirates Woman.

“It is something that speaks for teams, for organisations, for families, for everyone who has helped [whether that’s] one person or one group or one cause, everyone who’s helped them get to a place where they can make a difference or give a message. “So this is definitely not a personal achievement, it’s for all the children, and for all the women and for the families and communities.”

We’d like to send a huge congratulations to all the nominees and award winners. See you back here next year with more inspirational women from around the region. 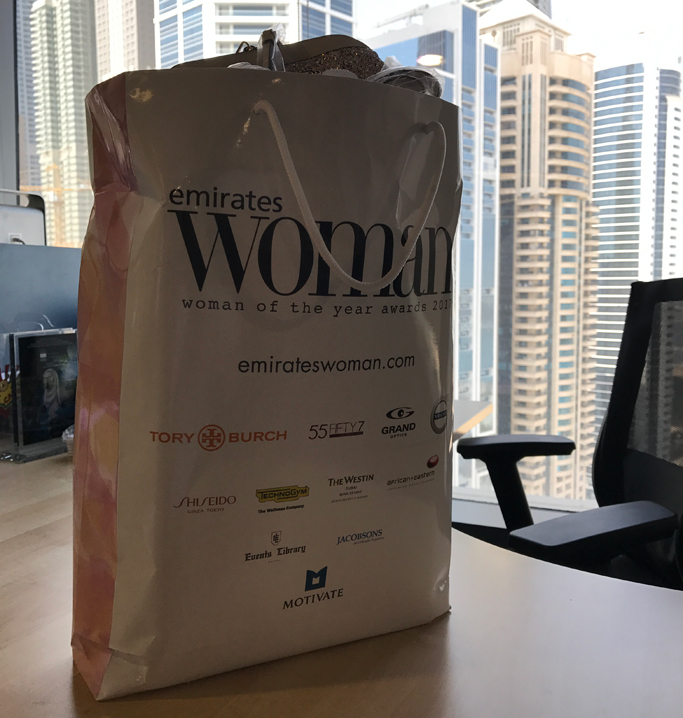 Guests made their way home armed with the following treats: