Spotted: Dubai’s Royals Were Out And About Over The Weekend 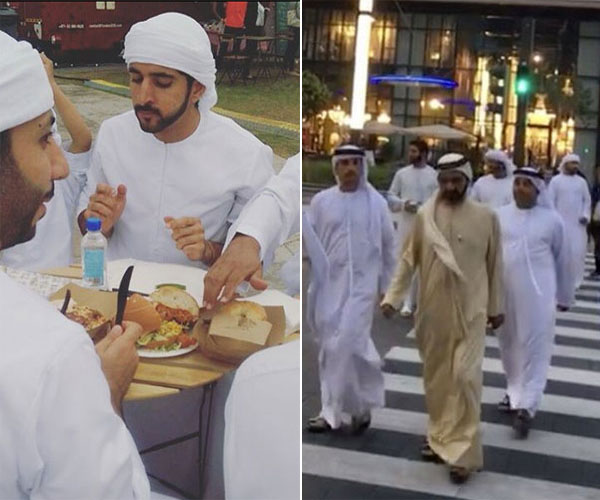 One was seen strolling the streets, while another was spotted devouring a monster burger…

We’ve said it before and we’ll say it again: in many ways, Dubai’s royals are just like us.

They appear to spend their weekends doing all the same things we enjoy doing – taking a stroll through a neighbourhood, trying a new brunch spot, or checking out a food fest.

It’s always a bit of a thrill to catch a glimpse of the royal entourage out in full force, and this weekend proved no exception.

HH Sheikh Mohammed bin Rashid Al Maktoum, Vice President and Prime Minister of the UAE and Ruler of Dubai, made a surprise visit to City Walk on Friday.

Footage of the royal at a pedestrian crossing quickly did the rounds on social media, and prompted speculation about what he could have been doing in the area.

Some thought he might be checking up on the work of the dangerous drivers who were caught doing donuts in City Walk on a rainy night a few weeks ago.

Sheikh Mohammed ordered the men involved to clean Dubai streets for four hours every day for 30 days, as a form of community service.

Or he could have been visiting one of his favourite haunts. A couple of weeks ago, the royal was spotted in City Walk having lunch at Farzi Cafe Dubai.

Read
Sheikh Hamdan Made This Insanely Hard Obstacle Course Look Like A Breeze
Sheikh Hamdan: Working Mums Are ‘The Nucleus Of A Happy, Healthy Society’

Meanwhile, HH Sheikh Hamdan, Crown Prince of Dubai, was seen dining at the street food paradise that was Eat the World DXB at Burj Park on Saturday.

One of the food trucks involved in the festival, The Roadery from London, shared a photo of the royal and friends tucking into some delicious-looking burgers.

Big thanks to @faz3 for coming down to @eattheworlddxb today and tucking into our #BURGkhalifa! We always said it was fit for Sheikh. Hope you enjoyed . . #burgkhalifa #goldburger #eattheworlddxb #sheikhhamdan #dubai #lovedubai #indubai #foodie #foodtrucks

The monster burger sold for Dhs230.

Dubai! Today is the last chance to get your hands on our world famous #BURGKhalifa down at @eattheworlddxb! 4 glorious stories of Wagyu beef, truffle cheese, seared ethical duck foie gras, and saffron mayo – all topped with an edible 24ct gold bun! At 230dhs a pop it’s no Big Mac, but two lucky customers will be munching on one of these babies for FREE today! Follow our Instagram and snapchat stories for a secret phrase. First two customers to repeat it will be walking away with Dubai’s most expensive burger. Simple. Worth mentioning we have our regular epic burger menu on offer too 😉 See you down here foodies! . . #burgkhalifa #goldburger #eattheworlddxb #dubai #uaefood #becausedubai #indubai #burger #burgerporn #foodporn #manvfood #food #foodies #instafood #instagood #luxury

Well, they did say the burger was fit for a Sheikh…