Dubai Police might soon be whizzing through the air on these… 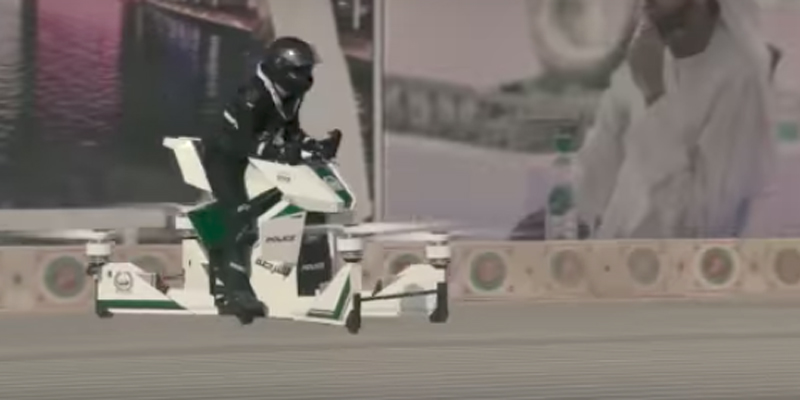 Flying taxis are currently being tested, the airport security line may soon turn into a virtual aquarium, the first Hyperloop could be built here… there’s no mistaking that Dubai is a rather futuristic city.

And one of the latest gadgets being trialled here could soon have the city’s skies looking like a scene from The Jetsons.

The Scorpion is a battery-powered bike created by Russian drone manufacturer Hoversurf, and was displayed at Dubai’s Gitex exhibition earlier this week.

A special edition of the machine was created for the police force, according to Hoversurf, and can seat one rider or be flown remotely.

It has a top speed of 70 kimometres per hour, and can fly five metres in the air with a driver onboard (so it could be a great way to bypass traffic jams).

It will run for 25 minutes when the battery is fully charged, and can carry an additional 300kg—but it’s not known when we can expect this gizmos to hit the streets of Dubai.

Read:
This Saudi couple shared a driving lesson selfie
Dubai Airport is about to get even more futuristic…

However the futuristic addition to the police’s fleet is hardly surprising, given that the force has previously unveiled prototypes for robot officers and robot patrol cars.

Yes, we’re basically living in the set of a sci-fi film… and we love it.