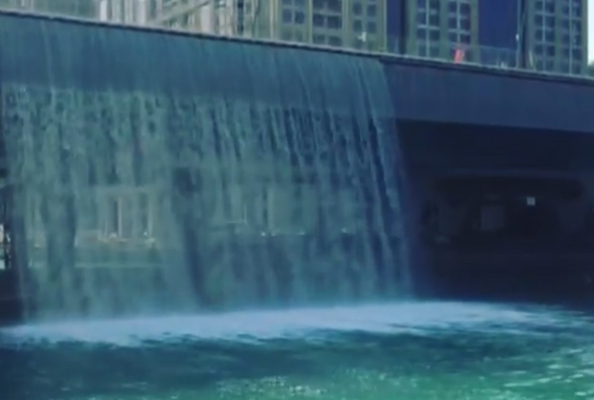 Sheikh Zayed Road is lined with attractions, but its latest one is slap-bang in the middle of it.

(Well, not quite, that would be an accident waiting to happen).

But as part of the in-progress Dubai Canal project, a stunning waterfall has just been revealed on a bridge running across the city’s main thoroughfare.

The cascading sight is sat right beside the W Hotel, The St. Regis and Westin in Al Habtoor City, and is powered by 80 water pumps.

The above clip was shared by Philippe Aerts, CEO of Magical Water Fountains, who snapped the waterfall while it was still in its testing phase.

Read:
Dubai Canal: Now Filled With Water
Dubai Roads Getting A Makeover As Part Of Huge RTA Plan
Free WiFi To Be Available Throughout Dubai (And Soon The Whole Of The UAE)

The waterfall is sensor based, so it can switch off when boats want to pass through.

The canal itself is still being filled with water (the process started last week) and will officially open for business at some point this month.

The scenic waterfall operates on sensors and stop when boats are passing under the bridge. This is the view from our office. One of the many final touches on the amazing #DubaiCanal project. The #waterfall over the #SZR bridge. … . #mydubai #gnguides #gulfnewsguides @gulfnews #gulfnews #uae #dubaiwatercanal @dubaiwatercanal

What is the Dubai Canal, you ask?

Well, it’s a 3.2-kilometre waterway that’ll pass right from Business Bay to the Arabian Gulf, and it’ll be six metres deep when finished.

It can be used for water traffic – but it’s not just about aqua activities.

Think Dubai Creek, but modernised and moved to the centre of the city.

When finished, we can expect a brand new Jumeirah Beach Park, a mall to go with it as well as a seven kilometre running track and apartments with views of Safa Park.

Here’s what we can expect it to look like: 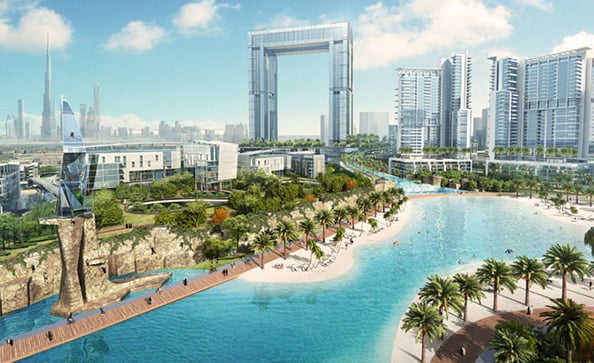 Now that it’s filled with water, the canal has turned areas including Satwa, Zabeel, Oud Metha, Karama and Bur Dubai into islands.

Pretty exciting, huh? If you want to know more about the project, click here – and in the meantime we’re counting down the days until we can get a water taxi through the heart of the city…